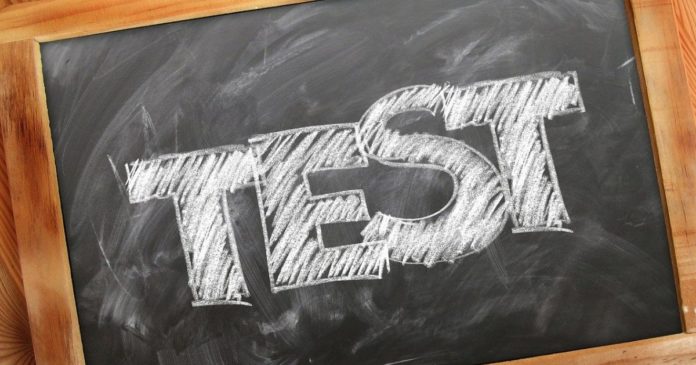 Linear is a non-custodial, cross-chain compatible DeFi protocol that offers a collateralized debt pool and is backed up by their base token, LINA. The protocol supports unlimited liquidity and allows the users to buy synthetic assets (Liquids) with zero slippage.

Users who have staked their collateralized assets into the debt pool will be able to “build” Linear USD (ℓUSD), which can be used to purchase synthetic assets (Linear Liquids) on the Linear exchange.

The LINA token is also a governance token, and token holders will have the ability to vote on oracle selection, pledge ratio, etc.

The Linear testnet for Buildr was announced on their Medium page.

Users can apply through a Google form or Shimo form (for testers from China). 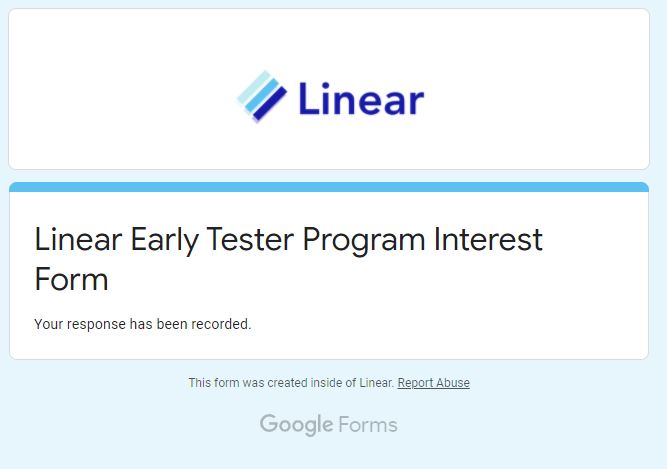 After applying, you can either wait for their response or can directly contact them over their Discord channel to get the testing LINA tokens. LINA testnet tokens are also available in the Uniswap liquidity pool (Ropsten) as an ETH-LINA pair.

Receive Test Token in Your Wallet

Open your MetaMask wallet and check whether you have received your test tokens or not.

You can see LINA test tokens and test Ether in the wallet. We have also changed the network to Ropsten Test Network.

As we have already mentioned, the test LINA tokens will be provided by the project team once you fill out the Google form. If not, get it from the Uniswap Liquidity Pool. For test Ether, you can visit the link and click on request 1 ether from the faucet (see below screenshot). 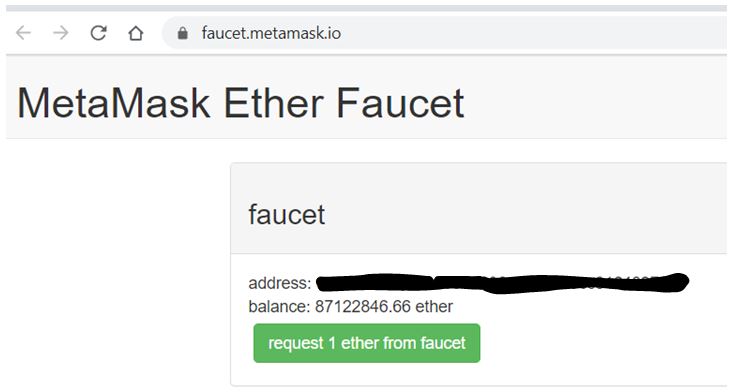 Click on “Connect Wallet” and approve the interactions in your MetaMask wallet. 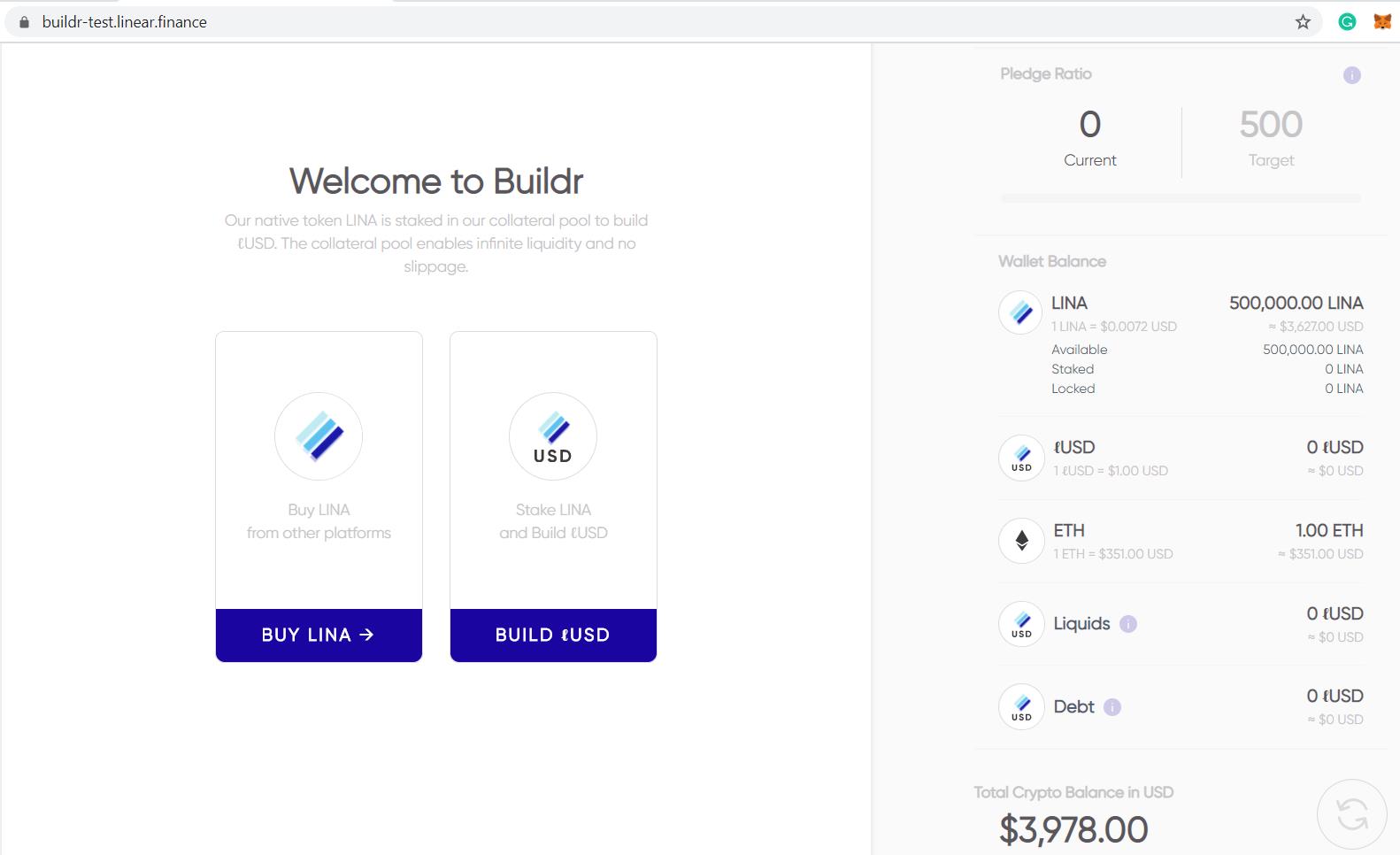 So the basic setup is now done. We can now proceed with platform testing. We will do a series of tests to understand how the platform works in different scenarios.

To start with, click on the BUILD ℓUSD button. 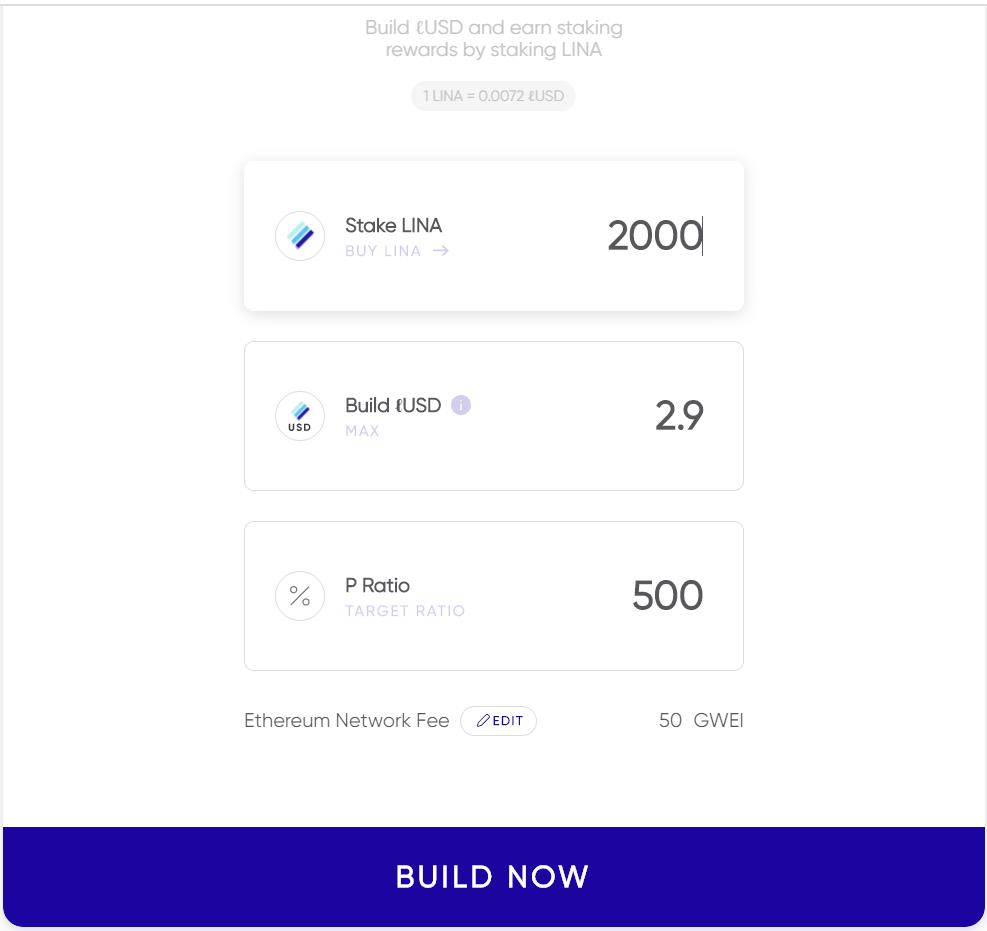 Kindly note that users are required to maintain a P-Ratio of  500.

P-Ratio is the collateralization ratio for LINA to ℓUSD. The underlying protocol follows a model where users stake their LINA tokens that serve as a counterparty to the liquidity that is built, so there needs to be a buffer. The P-Ratio is currently set to 500 and can be adjusted as per LinearDAO.

Enter the amount of LINA you want to stake, keeping P-Ratio 500, and the application will calculate the amount of ℓUSD tokens you will get after staking.

Click on BUILD NOW and the application will undergo to approve a series of three transactions. In our first attempt, the transaction failed at the Confirm Building state, hence no ℓUSD tokens generated. But since the staking process is completed, you can see some amount in the staked amount field. 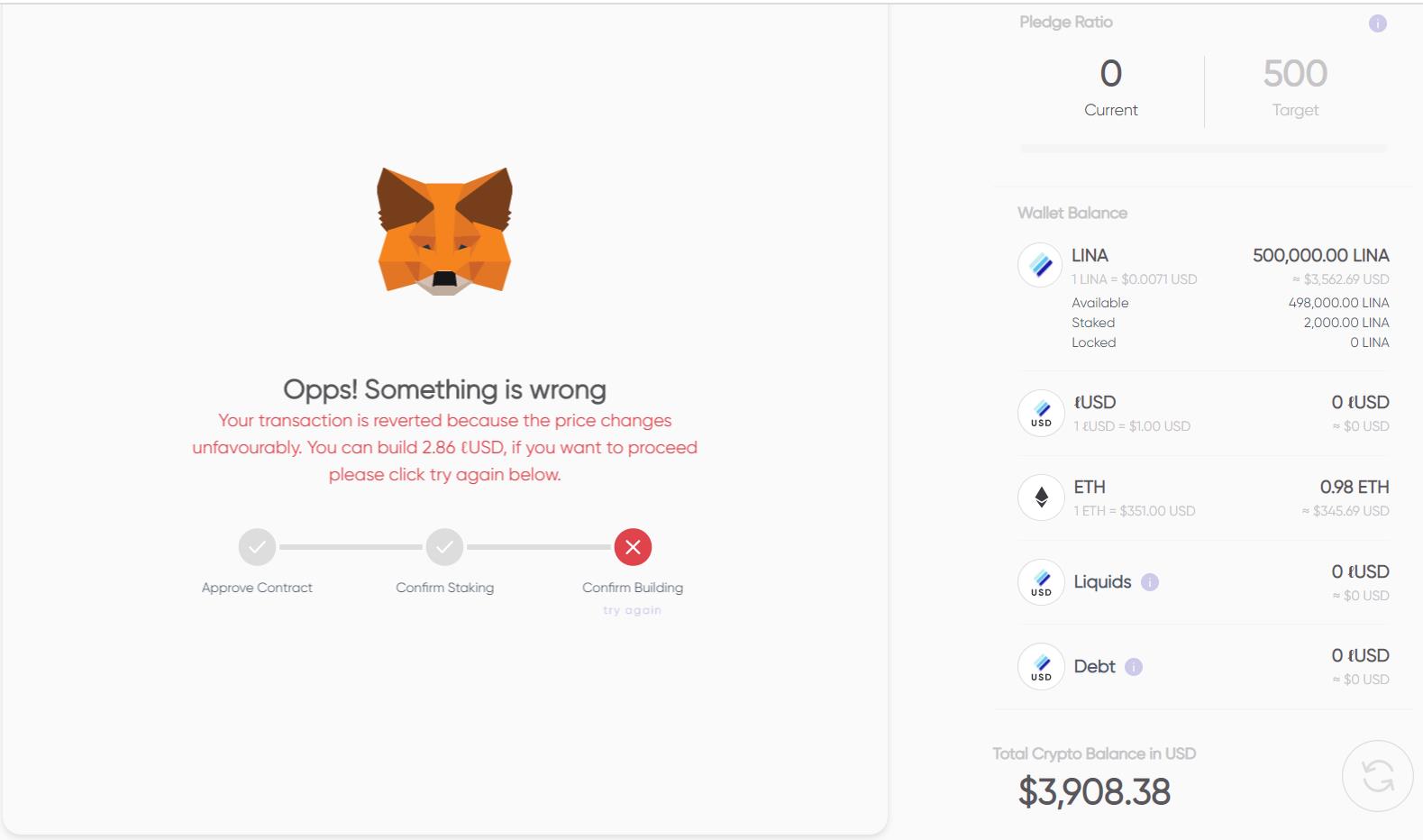 We have again tried to build ℓUSD by providing the following numbers. 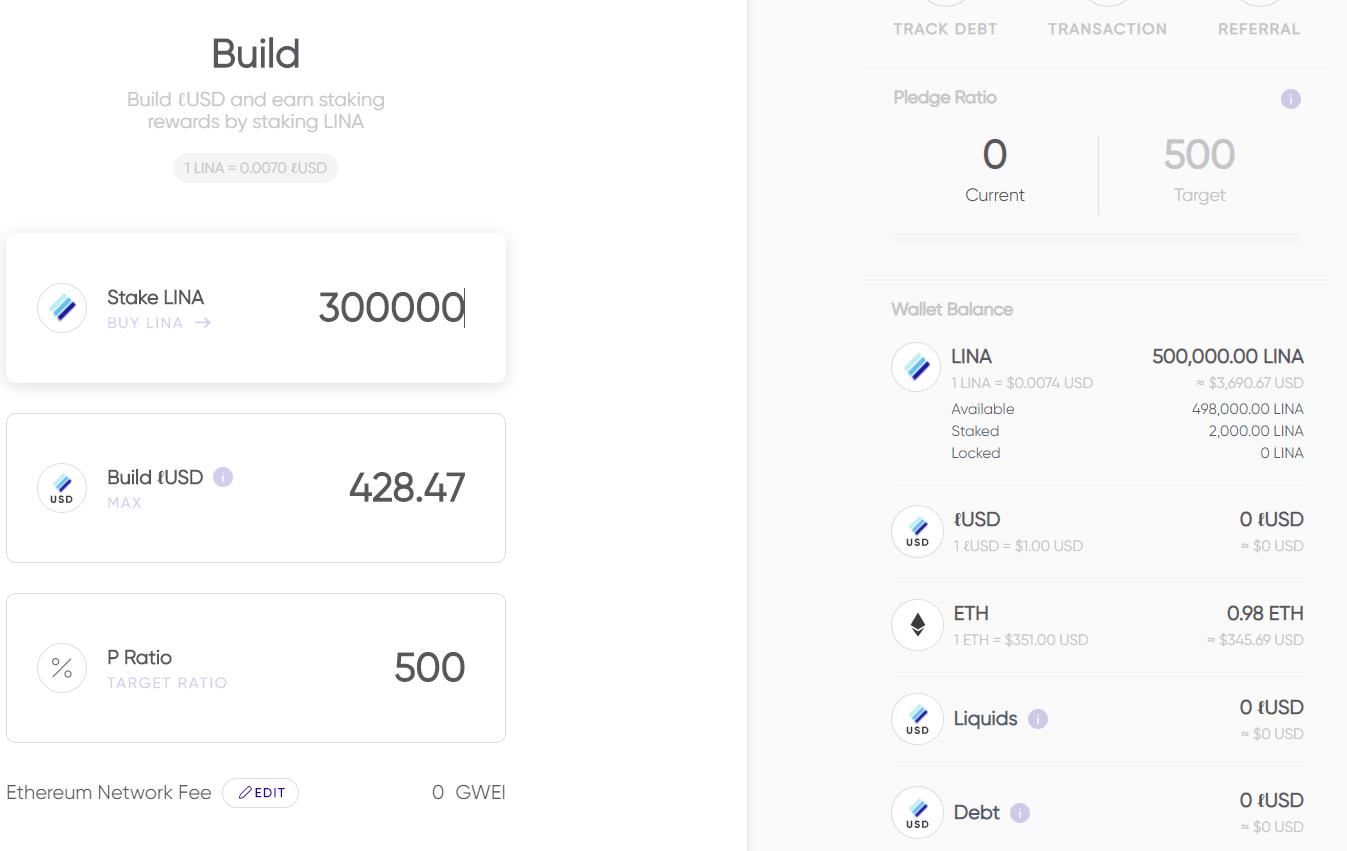 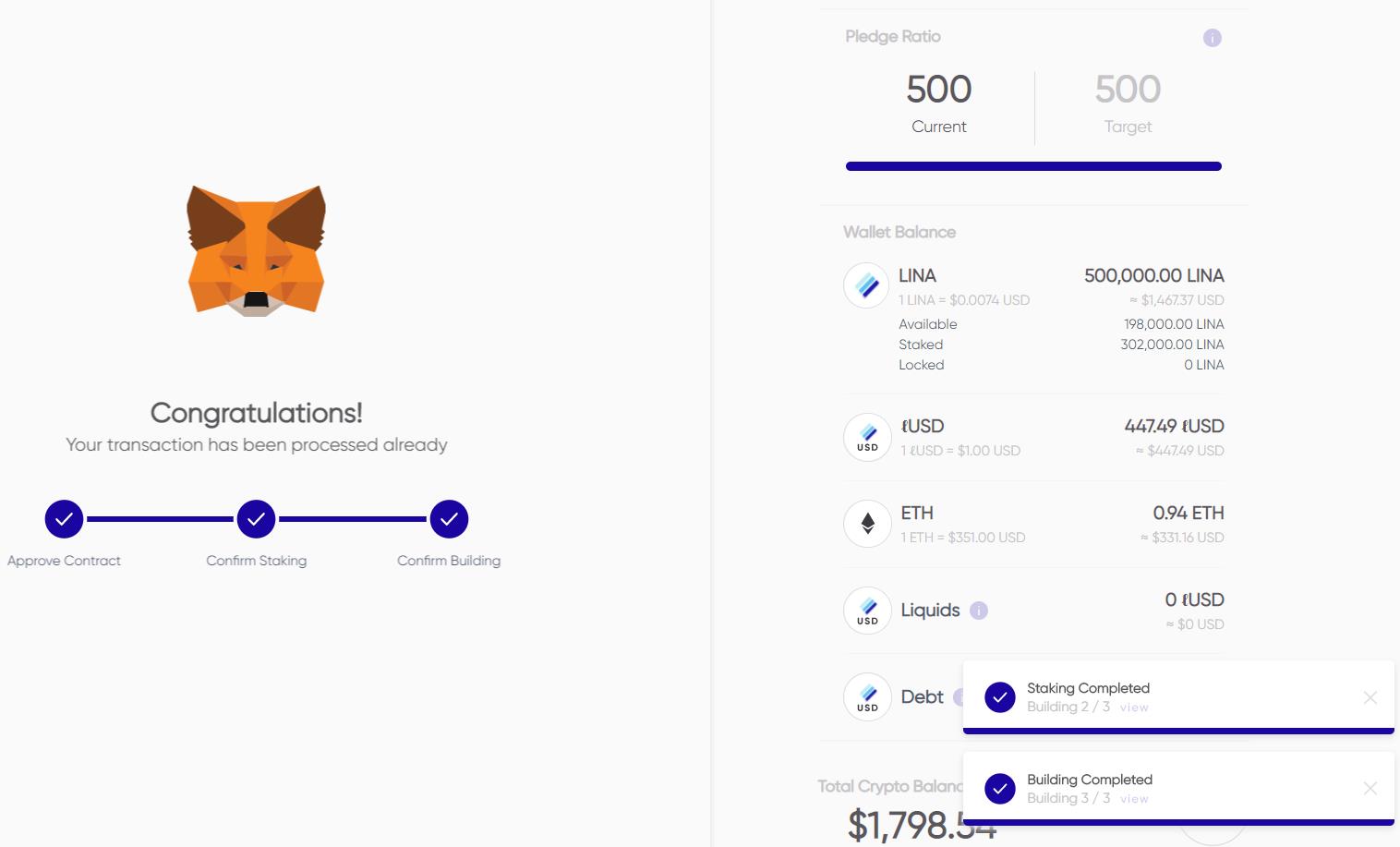 All transactions are completed successfully, and you can see and match the staked LINA amount and ℓUSD amount.

You can also view the transaction success status in etherscan. 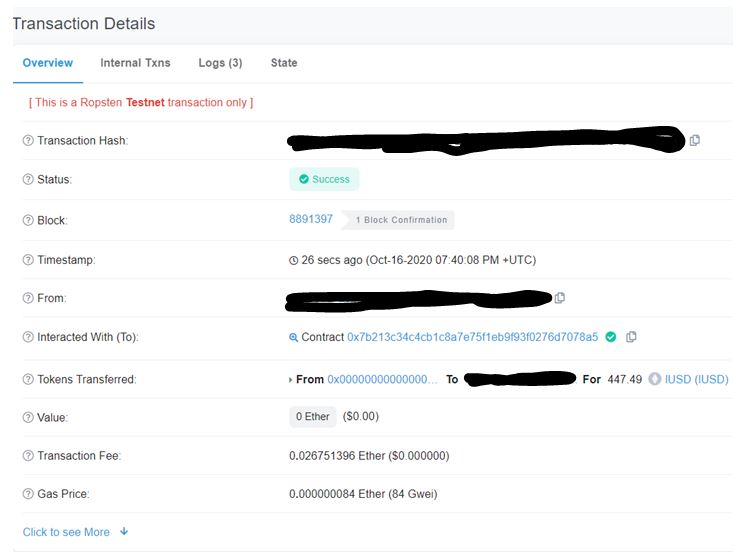 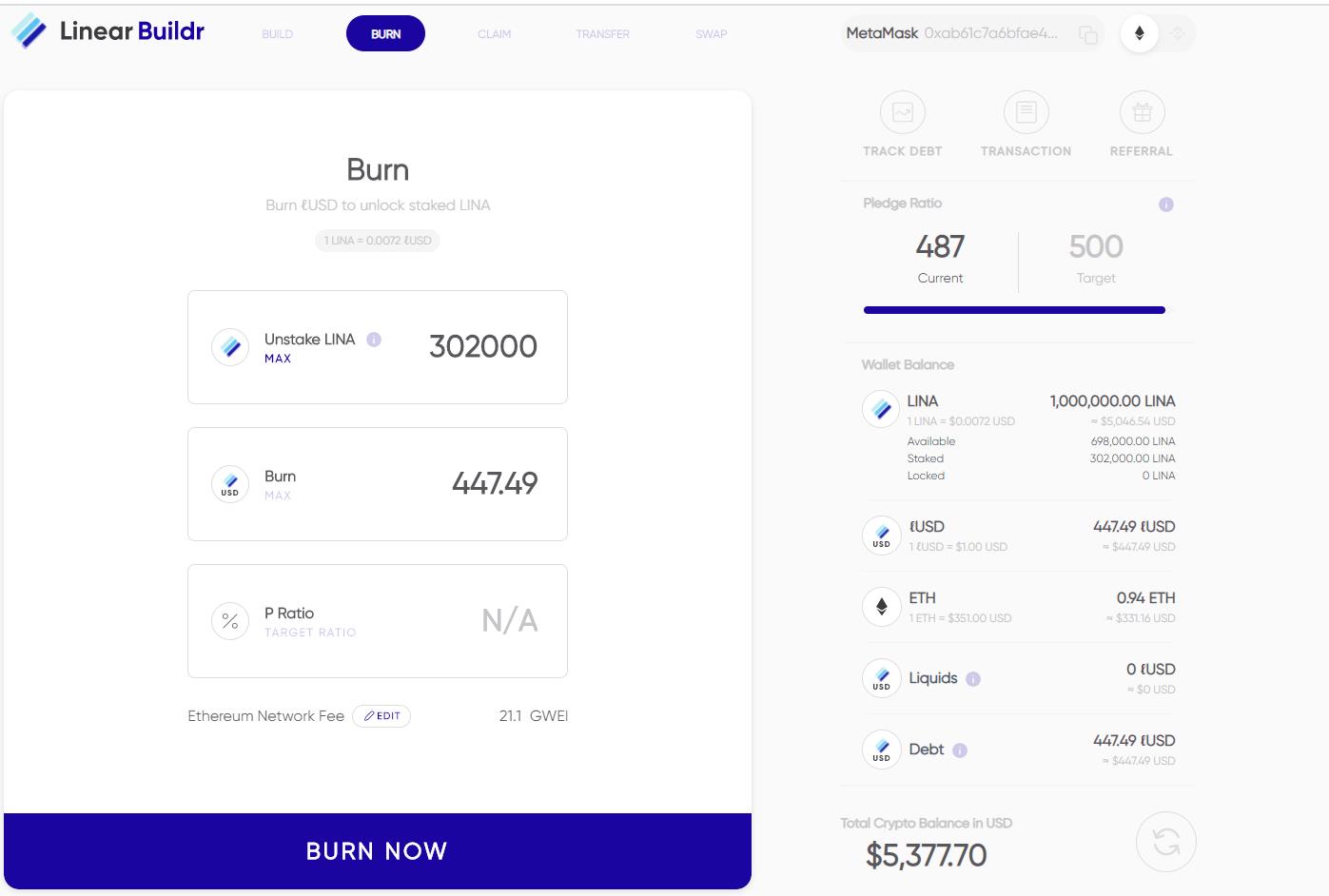 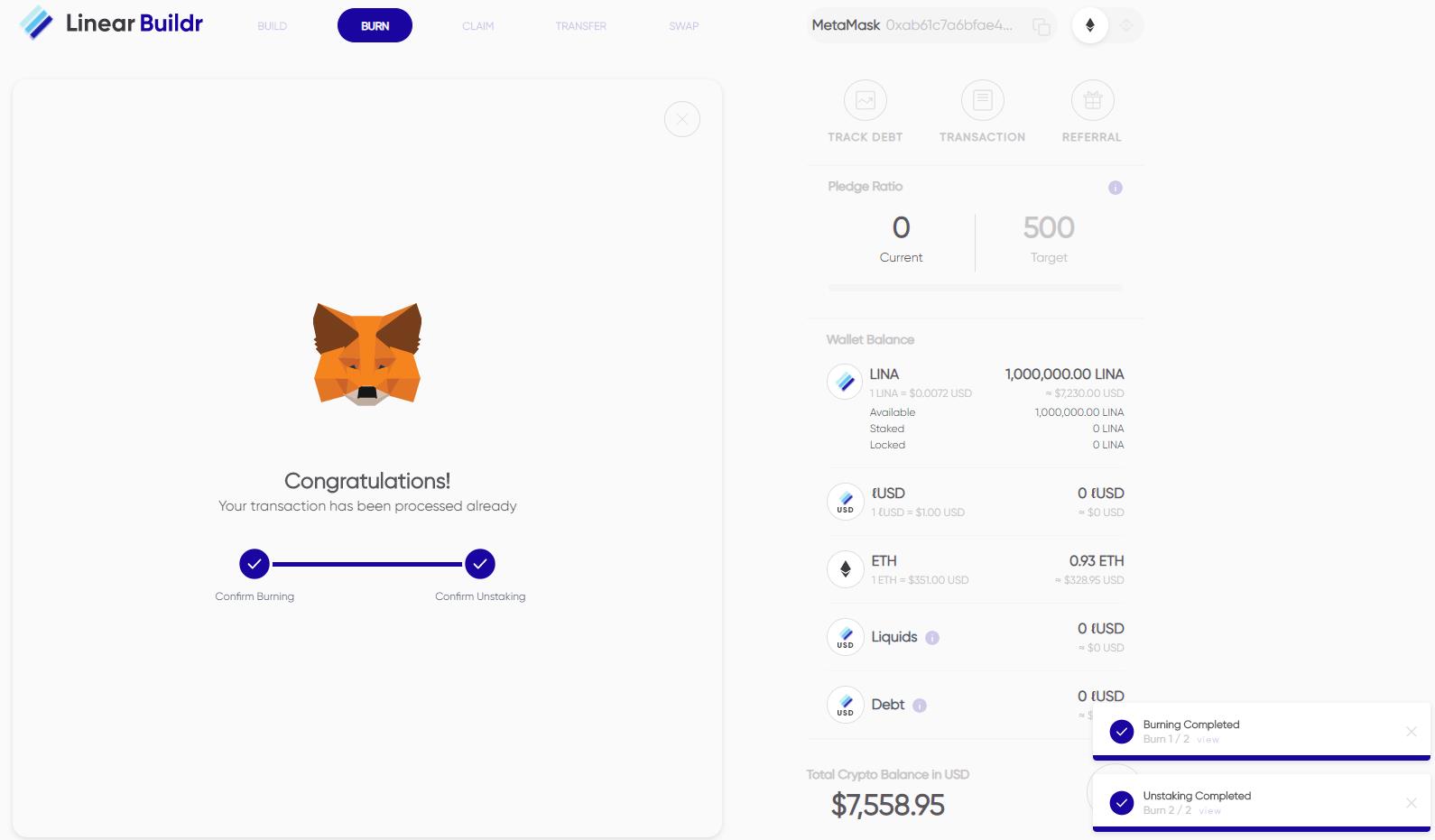 The transaction was completed successfully.

Users can claim staking rewards provided their P-Ratio is 500 or above. In case their P-Ratio falls below 500, they won’t be able to claim rewards until they burn enough ℓUSD to raise it to 500. 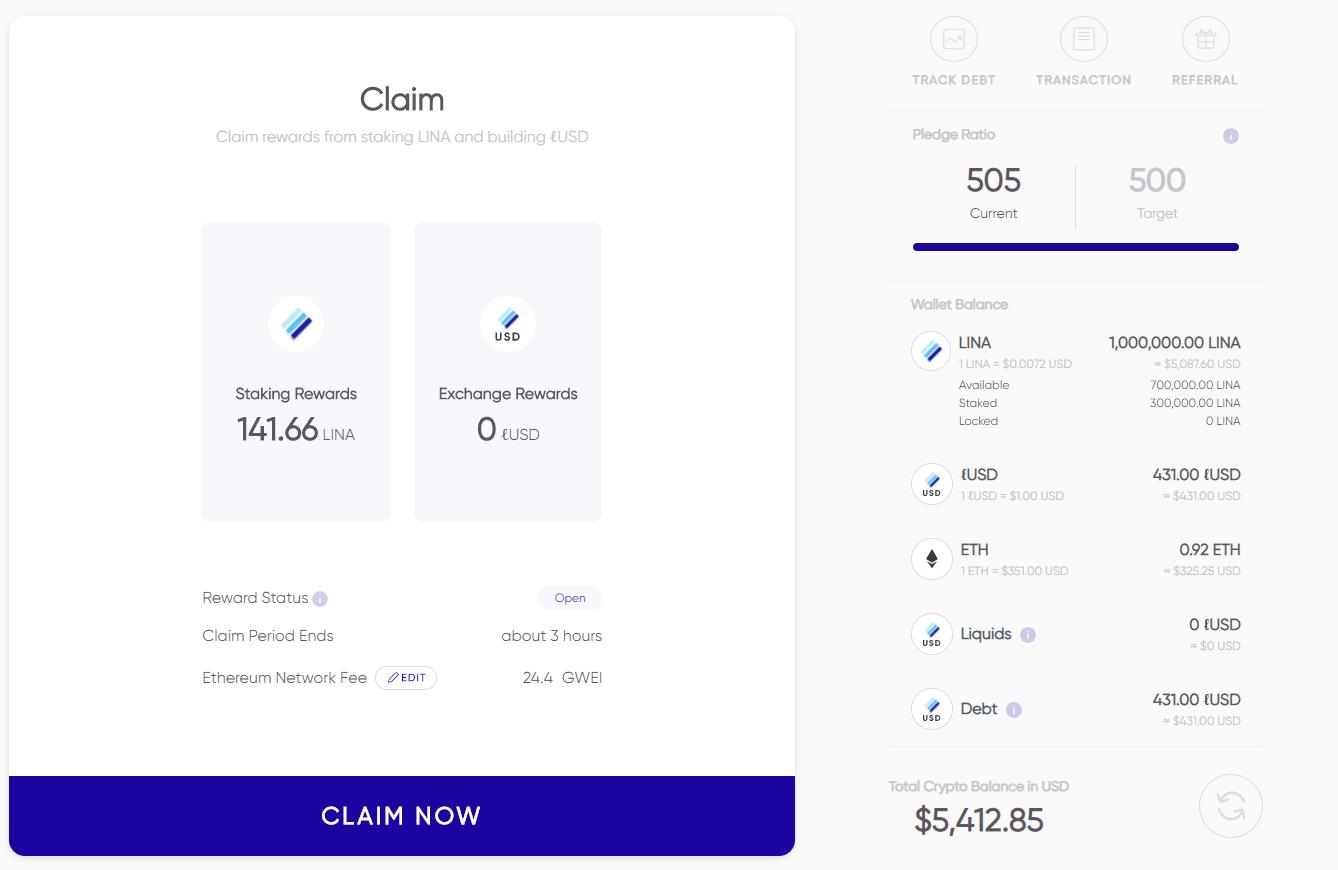 Once you click on the CLAIM NOW button, a transaction will be triggered and rewards will move to the locked balance. 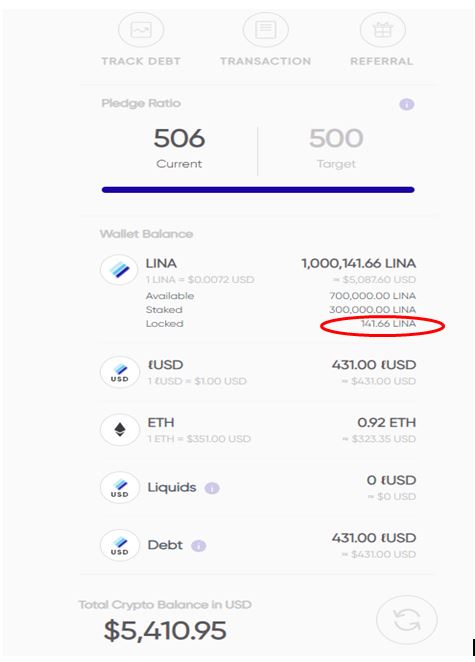 Since our P-Ratio is below 500, we are unable to claim rewards even if we earned rewards. 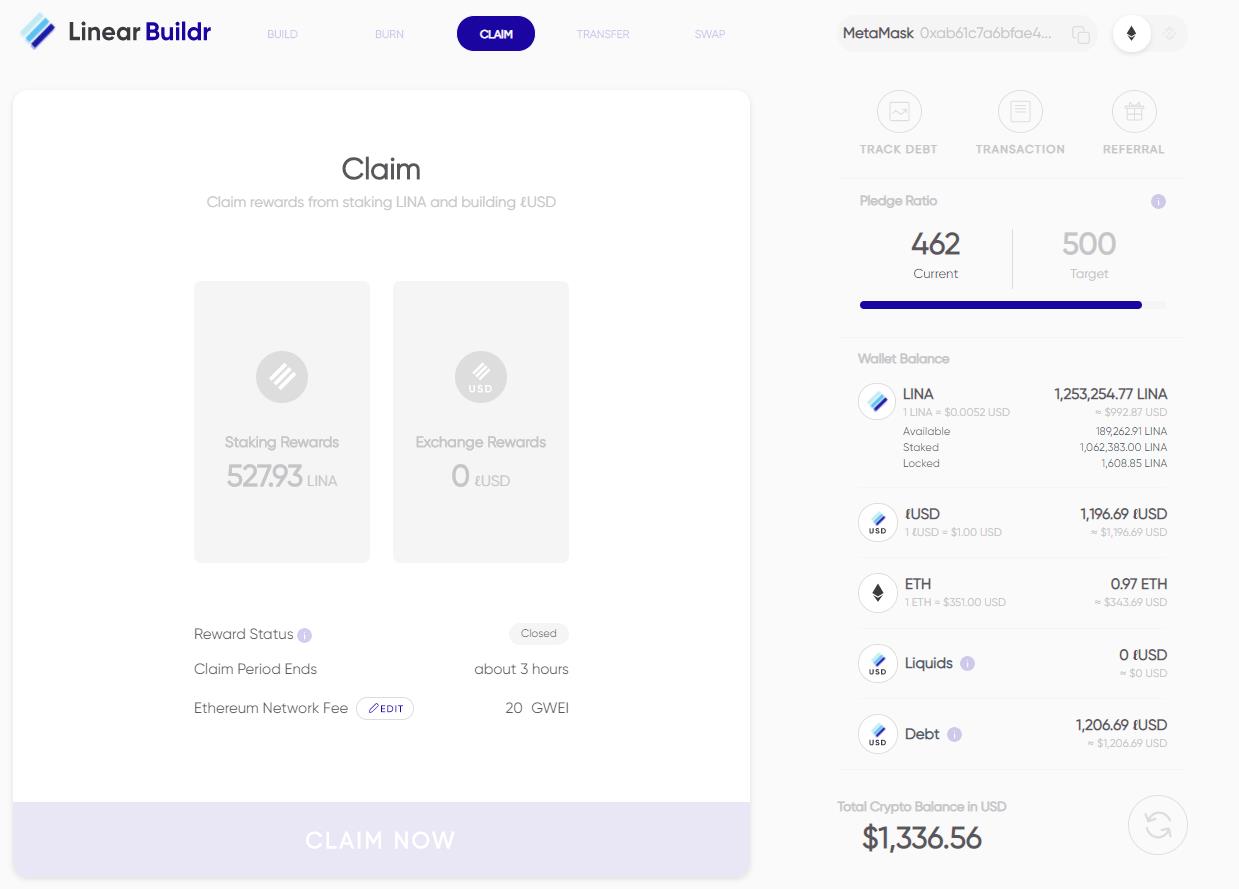 Now we have to burn ℓUSD tokens to raise the P-Ratio. 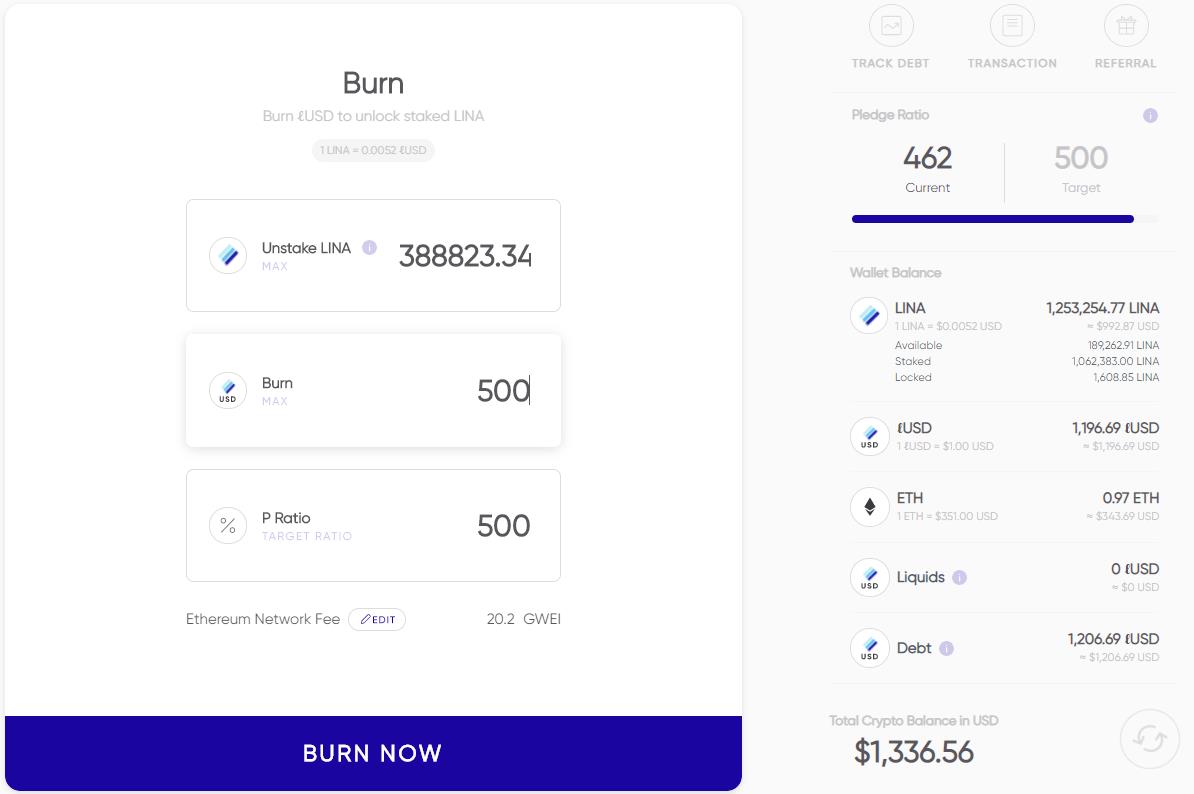 And as the P-Ratio crosses 500, the Claim Now tab becomes enabled. You can claim your staking rewards now. 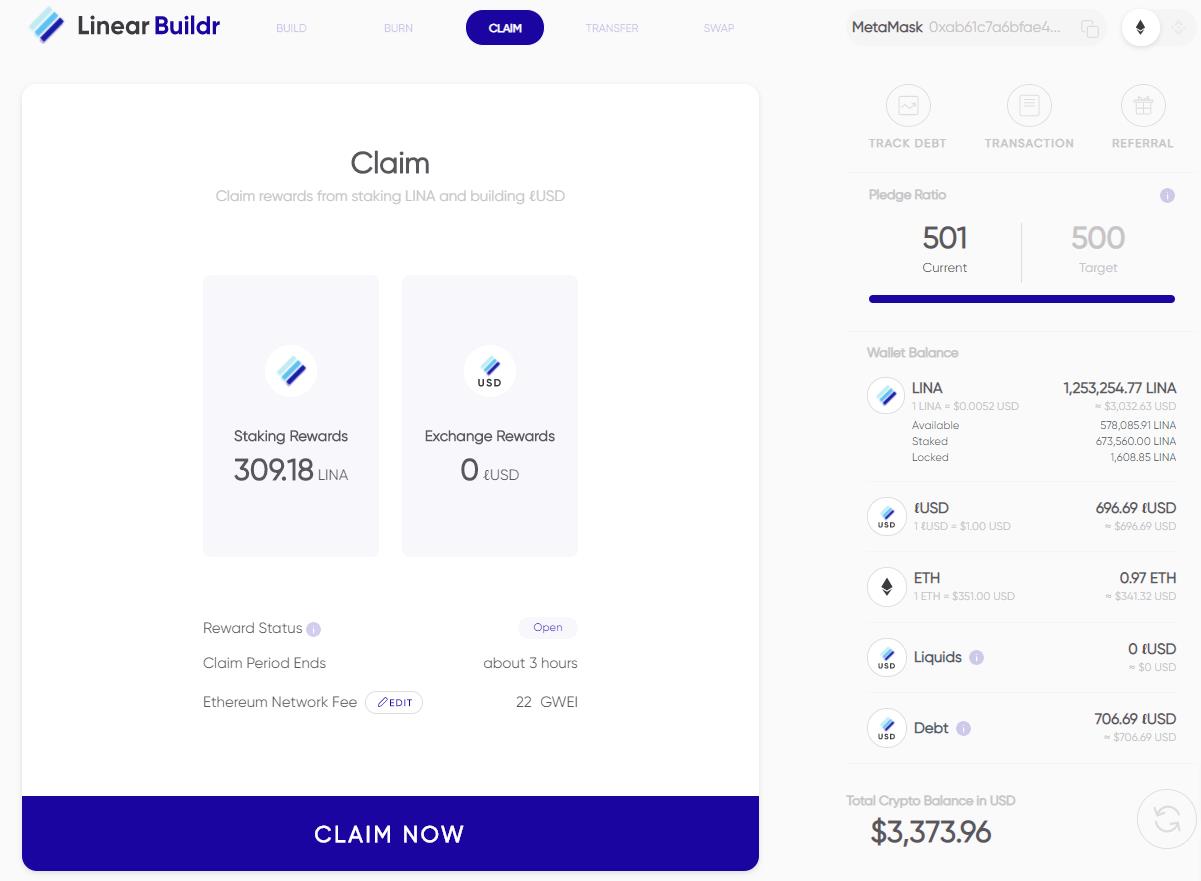 Important: Staking rewards in the Linear testnet are time-bound. Users are required to claim the rewards every 4 hours, otherwise it will be taken off by the application. However, the platform will extend the reward window in mainnet.

Users can transfer LINA tokens, ℓUSD tokens, and ETH to another user in the Ropsten Test Network.

You just need to fill in the amount of LINA tokens and recipient address. 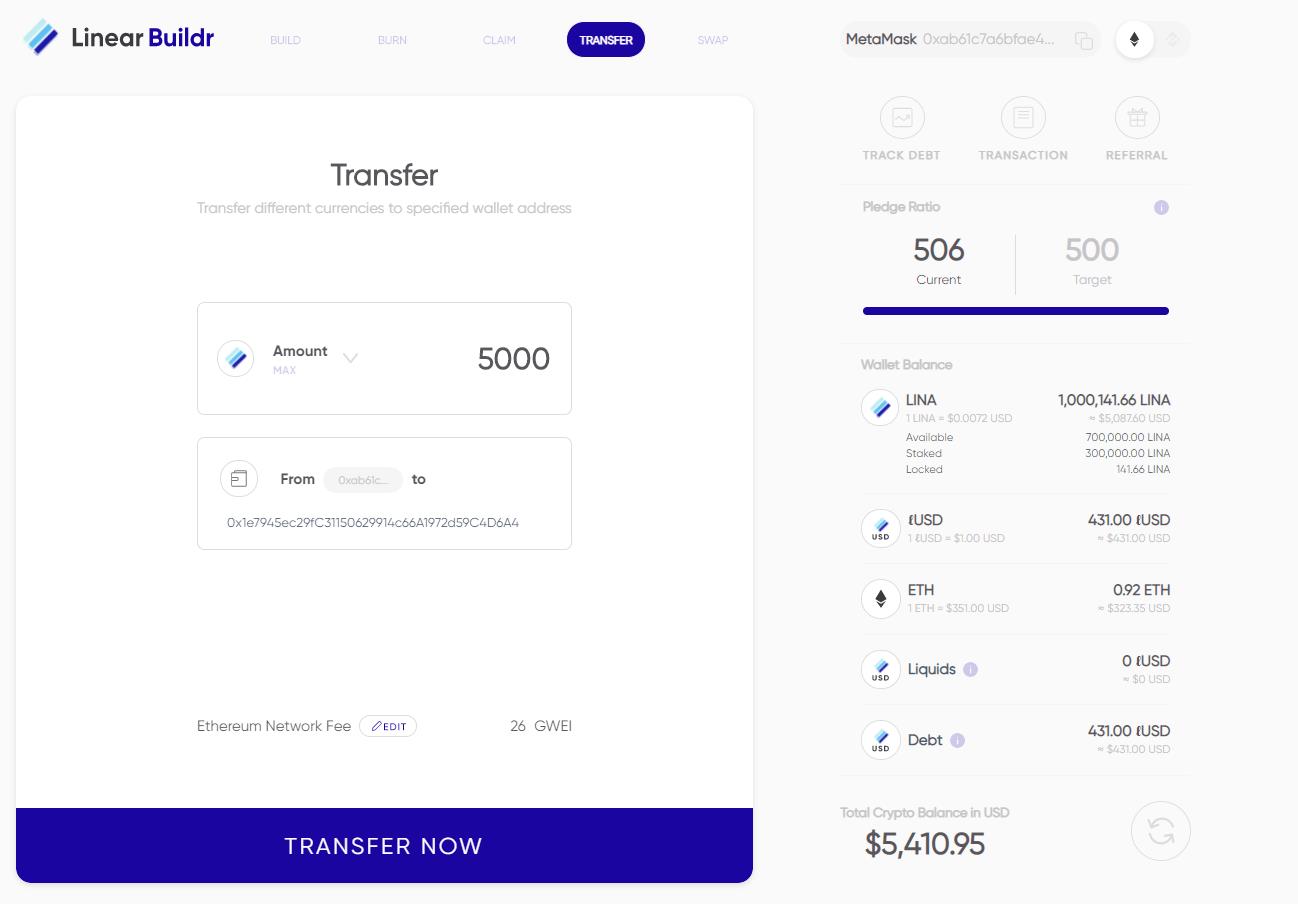 LINA transfer is done. See LINA in the MetaMask wallet. 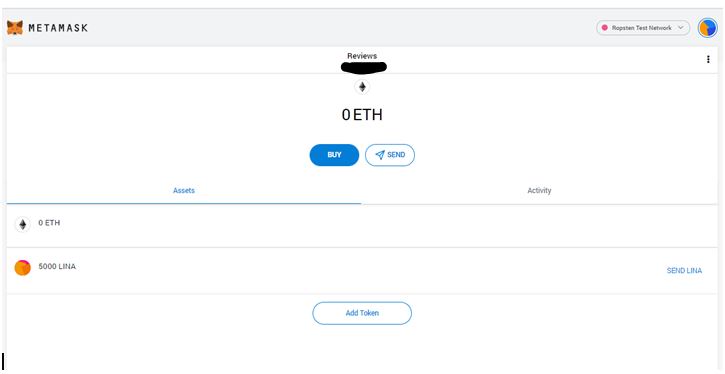 Enter the amount of ℓUSD tokens and the recipient address. 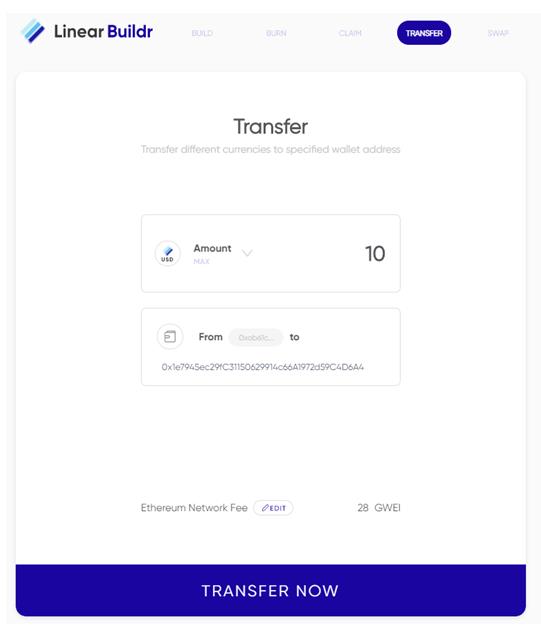 ℓUSD transfer is successful. See the results below. 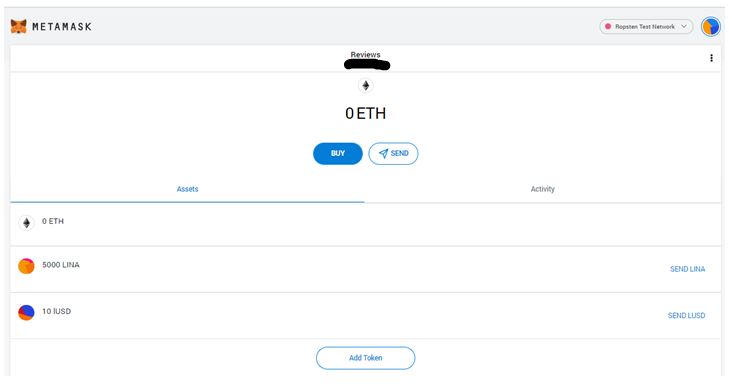 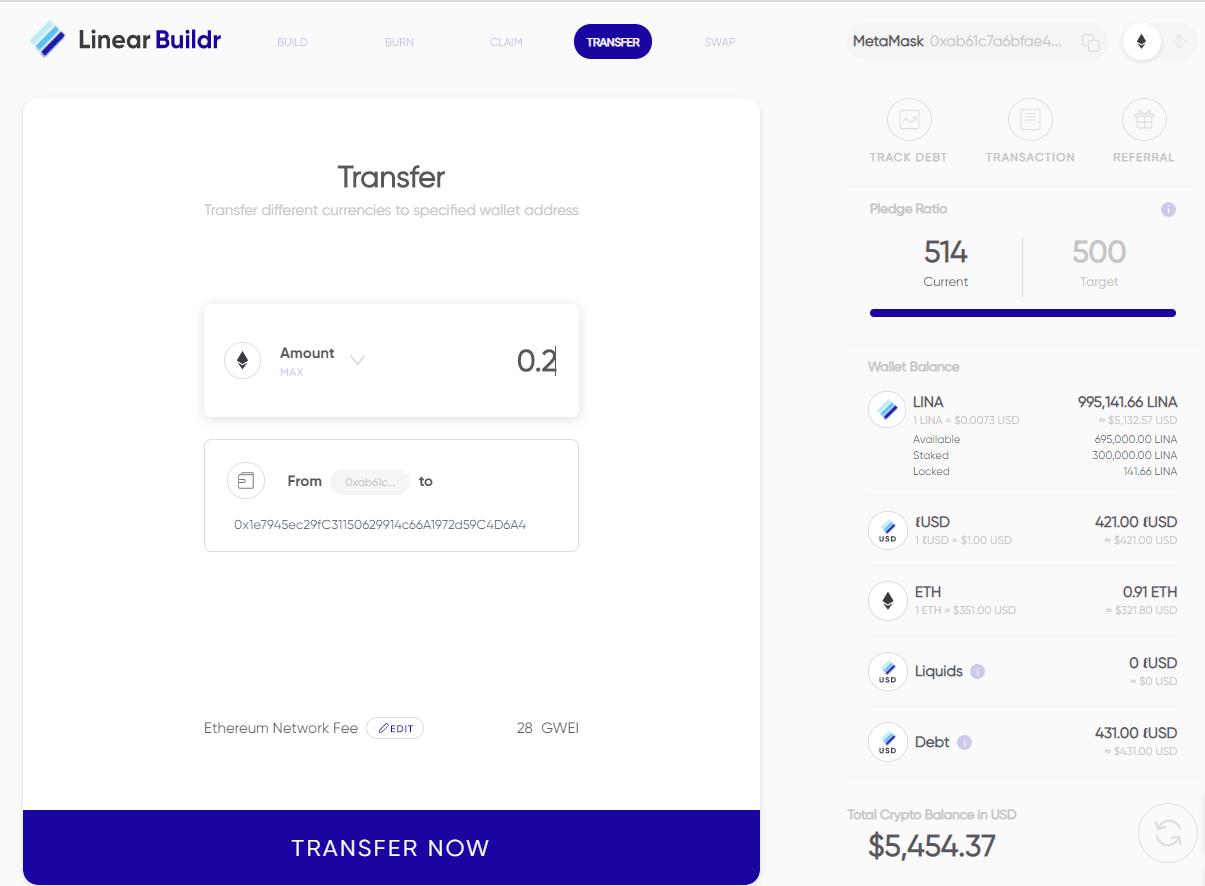 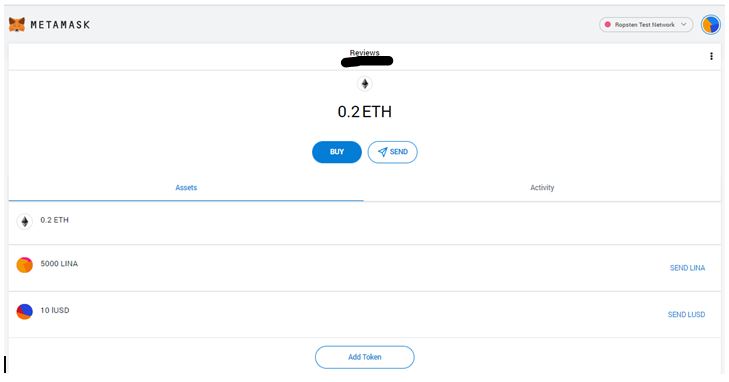 The Linear testnet for Buildr is running quite smoothly. The application is pretty fast and delivers expected results. The platform is supported by dedicated developers and researchers who are quite prompt and try to resolve the queries/issues of every tester in Discord.

Note that, since the testing is performed in the Ropsten network, the staking rewards, ℓUSD tokens or LINA tokens, will have no value in mainnet.

Read More: How to Use the Digifox Wallet 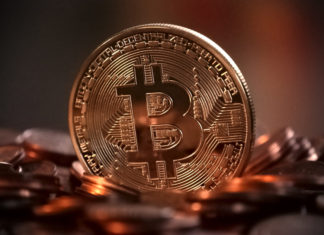 OPINION: Bitcoin IS the Brand of Cryptocurrency

Zach Barrow - November 10, 2018 0
Branding is one of the most important facets of business and has been for centuries. Who doesn’t know of Apple, Coca-Cola or McDonalds? Certainly,...