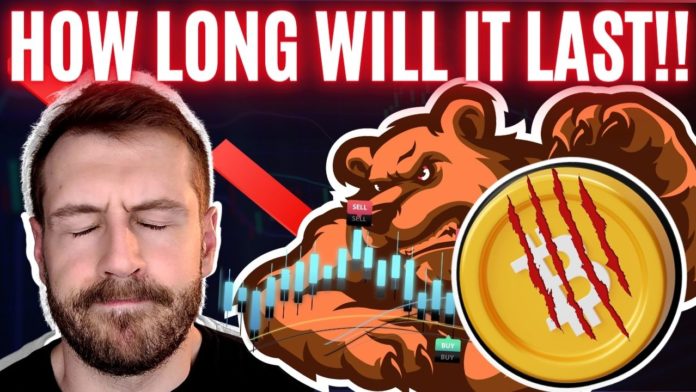 Every one of you is asking the question we are going to discuss today. How long is this bear market going to last? In 2014 the crypto bear market lasted 633 days. In 2018, it lasted 361 days. And the last one lasted even less than a year.

However, this time things seem to be different. It’s really hard when we are going through these Bear Market. We know. It’s affecting us too. So let’s see what the data tells us about when this crypto winter might end.

In the US stock market, bear markets usually last about 9 months. Now that doesn’t mean things shift automatically to a bull market. Usually markets trade sideways and get choppy for a while. For many of you watching if this is your first bear market. It can be pretty scary.

Another big number of you remember the bear market of 2020 right before COVID lockdowns started happening. And once they did in most places between February and May, the price of Bitcoin dropped like a stone. It went from $10k to $5k in less than 2 months. The low was when lockdowns first started in the US, Canada, and most of South America in mid-March.

Then others remember the implosion of ICOs in 2017-18. Or the DAO hack that almost killed Ethereum. Our point? We’ve been here before. Bear markets are devastating, but they do happen. We’ve seen them before. Some of you have too. Here is an article on some of Bitcoin’s early bear markets. We’ve recovered from them all so far.

Investments and projects that survive it end up stronger. They end up taking more market share when things turn around. It’s not just hopium. It’s true. Weak players fold and the strong, the builders, claim those customers for their own. Therefore, COVID helping create a bear market is just one example. We are going to look at 3 different perspectives and risk factors to see how much longer we think THIS bear market will last.

The writing is on the wall. These economic conditions are deteriorating all around the world:

We can’t look at crypto markets in a vacuum. They exist within these other terrible conditions. Therefore, There’s no question the global economic environment will be a drag on all ‘risks on investments like stocks, futures, foreign currencies, and crypto.

So from this perspective, could the bear market continue? Drag on for a while? Yes, it could. Also, some crypto VCs and early-stage investors think it could last 1 or 2 years from here.

As you’ve heard us say many times before, as Bitcoin goes, so goes the rest of the crypto market. So Bitcoin’s fundamentals could help us see if the bottom is in or when it might be. And we are happy to tell you that this is an area where we have good news. In many ways, Bitcoin’s fundamentals have never been better.

We know the price doesn’t reflect it but check out these on-chain indicators:

And we could show you more but these 5 indicators are a good sign of where Bitcoin’s fundamentals are. They are good and getting better. Now, that doesn’t mean we will see an immediate price rise. There are often delayed reactions to these things. But wouldn’t you rather buy into improving fundamentals instead of trying to catch a falling knife? We know we would.

Although Bitcoin leads the market, altcoins have been the big story. And you can thank LUNA/UST, Celsius, and 3AC for that. They started something that we worry still isn’t finished yet. We’ve covered most of this news here. And deservedly so. The lack of liquidity around all crypto markets not named Bitcoin is the story of this bear market.

So when one goes down, it takes another with it and it leads to forced selling of the only things liquid enough to sell into. And those 4 markets are BTC, ETH, USDC, and USDT. But, stablecoins and ETH aren’t the collateral assets of last resort that all these liquidations must sell. It’s Bitcoin.

Moreover, some liquidations involved ETH. And that helps explain some things like how Lido Staked ETH (stETH) is no longer pegged 1:1 to ETH. But over 90% of these forced sales from liquidations or defaults are sales of Bitcoin. Here are some reasons why this is happening:

This is the liquidity crunch we are seeing across the industry. Therefore, because everything requires collateralization, there’s no lender of last resort like the Federal Reserve to bail out the industry. Yet there is an asset of last resort. The last asset everyone’s holding. And that’s BTC.

In addition, this is the opposite of what we said earlier about how Bitcoin leads the market. Which it does. But here alt liquidations and liquidity pressure are driving Bitcoin lower. Also, what else is messy in the micro view of crypto?

More About Alt Point of View

Token models are more important now than ever. Think about it for a second. If you take staking and governance away, how many projects have real-world utility?

Paying fees on the network doesn’t count either. Because you could use a stablecoin or Bitcoin for that as many old projects did.  For example, Mark Cuban says it even more bluntly. He says that markets will recover when people see crypto as more useful and stablecoins are one of the clear-cut use cases for crypto. That’s why UST blowing up and the crisis of confidence we have now in stablecoins is so damaging to the entire industry.

Moreover, many believe the contagion isn’t over with. Many think there’s at least one more major liquidation ready to happen. For example, Roger Ver who put all his faith into Bitcoin Cash (BCH) just got liquidated on a $47 million account, according to the CoinFlex CEO. This liquidation came out of nowhere too.

Roger Ver owes CoinFLEX $47 Million USDC. We have a written contract with him obligating him to personally guarantee any negative equity on his CoinFLEX account and top up margin regularly. He has been in default of this agreement and we have served a notice of default.

However, of all this bad news, and it is all bad, there’s one of 2 ways to look at it:

We don’t know which but to us it feels like we are closer to the end of this than the beginning. But thanks to all the on-chain transaction transparency, we can see that the messes are dying. And the rest are cleaning things up and moving ahead.

We’ve looked at the market from 3 different angles:

And we aren’t sugarcoating things. The global macro looks neutral to the poor. Things staying the same or getting worse. Yet, Bitcoin looks healthy despite its negative price action. Fundamentals look terrific in many different on-chain indicators.

Also, crypto markets other than Bitcoin are suffering. There are existential questions around many projects. Liquidations all over the industry. It’s bad. And it could get worse, or we could be close to the end. Somehow, we think there might be one more liquidation and move down in the market to clear out the rest of the junk. Then we rebuild from there.

But we don’t know and no one else does either. We are just showing you the facts. And remember, all the previous bear markets did recover into big bull markets. We mentioned this in our on-chain video last week. Big 2x and 4x if you have the patience and hold quality.

So HODL your best positions and be patient. The best projects will only grow from here in the long term.

Is It Too Late To Invest In Cryptocurrencies?

Robert Patrinjei - March 25, 2019 0
Bitcoin has been out there for more than 10 years. The price of bitcoin has exploded over the years and people are now wondering...

The Importance of Noncustodial Wallets for Your Crypto