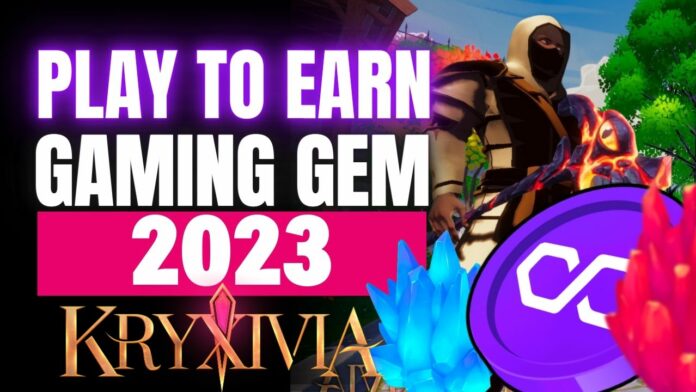 Kryxivia is a game we are really high on. And they have some new updates. This is what their updated new dungeons for PvP or PvE arena-style fights look like. Pretty cool, huh?

They were in alpha when we last looked at the game and the beta launch happens TODAY. So are you ready to see what’s new and what’s cooking at Kryxivia? Then, let’s check it out.

In case you missed our project review video we did on Kryxivia last spring. You can watch the full review after you read this article that covers all the exciting stuff coming up in their Beta release and most importantly the “Income Opportunities” of the game. I have really broken it down well for you!!

Kryxivia is an MMORPG game that takes place in medieval times. In fact, it’s the first fully launched Web3 MMORPG game. When we talked about them earlier, they were in the middle of their alpha launch. You will be able to play PvP or PvE. You use a combination of Kryxits (CRICK-ZITS), gems, spells, and weapons as your tools to help you get through challenges and quests. Any of these tools are tradeable directly with any other player.

So not all features of the final game were ready yet but enough of them were for players to test the game out. The graphics are excellent compared to many P2E games. They are a Polygon partner working with Polygon Studios too. And that’s helped bring some seamless integrations too.

The game uses NFTs and blockchain for in-game play and money-earning opportunities. A nice added benefit is that both tokens in the game, KXS and KXA, are a chance to make money. KXA is listed already on a couple of exchanges and is up 74% in the last 30 days. Even you non-gamers would like a return like that right?

Meanwhile, the in-game currency KXS is NOT listed yet. That means your gameplay is like early mining for a token that will list but hasn’t yet. It’s hard to get an earlier stage for investment than that. And we both know that often the earliest investors get rewarded the most in games and also in crypto generally. More on that coming so stay tuned. Do you have a favorite game right now? Let us know in the comments

Now the beta launch is here. If you like what you’ve seen so far, go to Kryxivia and try it out for free. So what’s new and improved from the alpha launch? The Kryxivia team had a lot to work with since so many of you tried the Alpha version. And here is what the improved beta version looks like.

The moment we've all been waiting for is here! 👀

Our beta launch for Kryxivia is set up for 8PM UTC today! ⚡️

Get ready to embark on a journey filled with magic, adventure, and endless possibilities 🪄

You can see right away that we are in one of the dungeons. For the PvE part of the game, it means you sometimes have to fight an NPC or non-player character like a monster or a demon. One of the upgrades to favor the game is more NPCs that you have to deal with. One upgrade for you is more kryxits, gems, spells, and weapons for you to use to fight them.

You see that you are a player and Arkalius is another player. For now, you are fighting the same monsters together. Here the player is trying to unlock the gem that he found in the coal so he can chip away at it and get it for himself.

At this stage, after we both jump through the fire, we have a monster to fight arena-style. We are using a combination of weapons and spells to try to defeat him. Along the bottom left and center of the screen you can see what weapons, gems, and other protections you have that you can use for the battle.

The bottom center panel is constantly adjusting figures including your health during the battle. You can see if you are hurt and need to retreat or you can keep fighting. While you are checking out the gameplay, the Kryxivia team did a lot to keep the game fast and fees low. You can import or export your NFTs on Polygon to move them fast and cheap. They integrate with Polygon on OpenSea too. Although the tokens are on Ethereum, the game itself is on Unity Multiplay and on Unity’s servers, where it’s easy to connect and play. And fast.

A couple cool things coming to the game are PvP wagers at the end of Q1 and tournaments of team play (1, 3 or 5 players) coming at the end of January. All to bring more players and more competition and fun into the game. Now that you’ve vanquished the monster, you can recover, earn points, and you gain effects that you can use later.

Kryxivia City was packed with players during our beta event! ⚔️

500 brave souls joined in to test out our fantasy game, and despite some minor glitches, it was a huge success 🔥

Thanks to all who participated and helped bring our world to life! 🤝 pic.twitter.com/tbIkCKvlEV

Having won our battle, now we exit the dungeon. The quest journal shows that we finished this quest by killing KIRIG. But we have another quest that’s ongoing. This is a good way to see what you’ve accomplished and where you can go to add more points and tokens to your character.

So where can you make money playing the game? There are 3 ways to do it:

KXS is the in-game token. So, as you complete quests and level up in the game, you are earning KXS. And there’s good news here. Kryxivia paid out its early investors and the vesting is finished on this token. So when you earn KXS, it’s like you are an early stage investor mining the token. And it’s fair. Anyone can earn by playing. When the token lists, you can sell. For now, you can only trade within the game with other players.

KXA is the blockchain token on ETH. They started on BSC and migrated over to ETH since the alpha. As the game’s value grows, the blockchain token grows. Like the difference between the Axie token and SLP. You use KXA to move your NFTs from on-chain to in-game. Both tokens have a burn mechanism when moving between on-chain and in-game or vice versa.

The NFTs in the game are the objects. The kryxits, gems, spells, and weapons. They all have value. You can buy more if you earn KXS or sell or trade your NFTs on the NFT marketplace or with other players.

Transactions are as effortless as a wave of a magic wand 🪄 pic.twitter.com/b6E9vNCqeY

So you can see the game has good tokenomics, good game play, and it looks like fun while you make money. 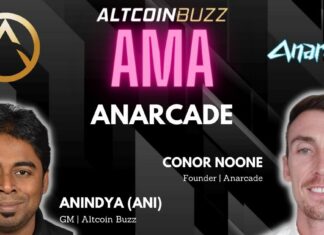 Anarcade AMA with Founder Conor Noone

Where to Park Your Money During a Bear Market?