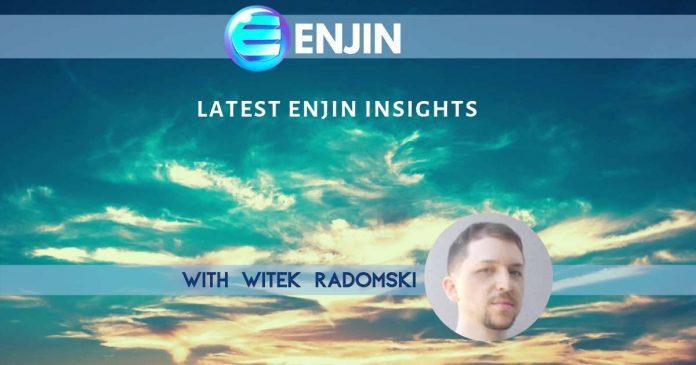 Witek has provided a well-elaborated interview with lots of updates on Enjin with Blockchain Brad.

The interview with Witek, CTO of Enjin, is more than an hour-long but you should definitely watch it if you have the time. If not, I’ve made some takeaways. Enjoy.

The recently launched Enjin marketplace has gained lots of traction. Many are using it on a daily basis. Game items are being bought and sold even before games have their beta/alpha released. The current state of the marketplace is very basic with lots of functions unavailable yet. Here are some updates which will be happening soon:

Enjin aims to build the world’s first peer to peer on-chain trading system. Users will be able to walk up to each other with their Enjin wallets and perform a secure trade directly.

1st November marks the anniversary of Enjin and the Enjin MFT will be locked to wallet addresses as well. Enjin’s new COO, Caleb Applegate, has taken the company to new heights. It will now be focusing on making their products impeccable. The next months will be all about adding new features and polishing on what has been already put out. This includes code quality of SDK, API quality of the platform, Enjin wallet and EnjinX.

Enjin Beam
The Enjin Beam system is currently only usable with the Enjin wallet. Enjin is improving this system so people will be able to claim items even without its native wallet. This allows games in the future to reach out to a larger audience and promote the product.

SDK
Enjin has released Java SDK on GitHub and also paved the way for Minecraft. It is currently working on the Godot game engine, which is one of the most popular game engines worldwide.

Enjin will be adding new interesting examples to the Unity SDK. The current ones are too simple and don’t really allow the developers to design secure games. There will also be an item management system. Hence, the developers can use the SDK for all game items.

Additionally, they will also be able to interact with game items. it doesn’t matter whether they’re on the blockchain or not. This increases SDK’s usefulness. It will also allow game developers to enter the blockchain space more easily.

Users will be able to use this web panel system for all sorts of purposes. These include: creating new items and their metadata, uploading their images, minting copies of those items, creating beam QR codes and so much more. This system allows users to just flash their item tokenomics instead of jumping into the code by using this web UI.

This will be released together or shortly after the mainnet’s launch in November.

Mainnet
All the users will easily mint and create new assets on Ethereum mainnet. There will be more documentation and more user interfaces. The developers will be able to run games on the Ethereum mainnet.

There has been a persisting issue with gas price spiking and Enjin has short-term plans for that. Enjin has created an SDK for game developers to interact with blockchain and non-blockchain items while Ethereum 2.0 is being developed.

Game developers
Recently, Enjin hasn’t included many new games. On the contrary, it even shut down its early adopter’s program. They are currently supporting the existing game developers. The plan is to work on the web panel and SDKs to allow new developers to easily come in and build games. After launching the mainnet, people can start exploring and building things on the Enjin platform. Then, the company will start reaching out to more game developers and expand forums.

Enjin was planning to do a side chain but now they are abandoning that plan. They are building something completely new and the technology can’t be fully disclosed. Their core team is currently focused on improving the wallet, marketplace, mainnet and SDKs. Efinity will resume progress once everything’s complete.

Consensus Algorithm
Enjin has found a structure that lets them synchronize blockchain (ordered and precise) and non-blockchain (a completely non-serialised system) systems. This provides a solution for infinite scalability. Enjin has solved most of the problems on paper except synchronization problems.

Witek says that there are big companies that need to tokenize different things. For this, they need a platform. Those companies have done their research and approached Enjin. These partnerships also provide the company with an additional way to earn revenue outside of gaming.

Furthermore, Enjin will be announcing a very special partnership (an organization in the crypto space) very soon.

Minecraft Plugin
Minecraft plugin is completely done and ready for release. Besides, Enjin is going to release Enjincraft’s source code, which is like a demo server created to showcase what people can do in Minecraft with Enjin’s plugin.

Briefcase
Many have been asking about this but sadly no new information has come up.

SENS Token
Witek mentions there are game developers wanting to integrate SENS tokens into their games. He gives an example: the charity tokens could be used as a health restoration utility item.

Statistics System
Enjin is working on building a full statistics system for each item/token. Enjin wallet and EnjinX will incorporate this system. This will provide a way for users to categorize their assets as well.

Conclusion
There are many things Witek couldn’t share due to legal restrictions and NDAs. However, there is one thing for sure: Enjin has many things in-store in the coming months. Marketing will also be ready to roll out once mainnet is launched. Enjin is going to pick up lots of speed when November arrives.

Check out other Blockchain Gaming Articles

Blockchain Gaming: The Beauty of Getting in Early 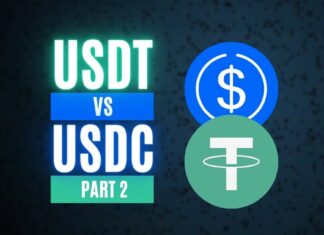 Lawrence Mike Woriji - October 31, 2022 0
Tether Limited issues the USDT stablecoin. The platform first issued a dollar-backed cryptocurrency known as Realcoin in 2014. The coin was launched on the...

The State of Cryptocurrency Funds: Part 1