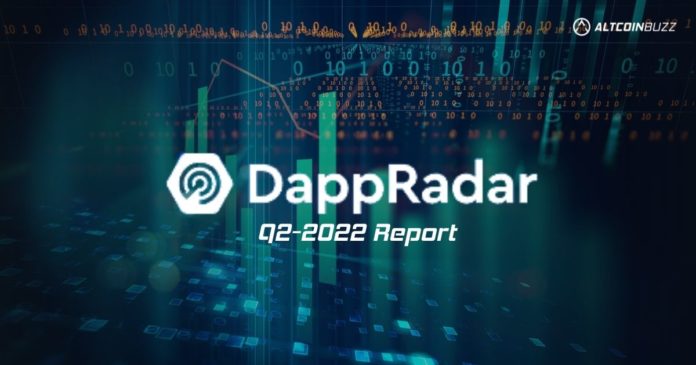 DappRadar, a data analysis company, has released its Blockchain Games Report for the second quarter of 2022. The report analyzes the state of the blockchain gaming industry and key statistics from April to June.

Dappradar, known for offering accurate insight into decentralized applications, noted that the gaming world remained strong with high activity while the rest of the crypto space struggled with the bear market.

According to the quarterly report, blockchain games and game-related NFTs have performed better than other sectors and were not negatively affected by the recent drop. This exceptional performance peaked in June when the entire industry experienced a slump. Let’s look at some key takeaways from the report. 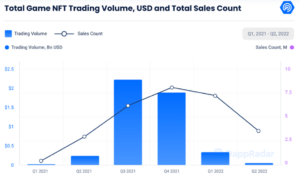 Investors in the DeFi space understandably pulled back due to the series of collapses. However, P2E games projects continued to experience a strong investor presence during Q2-2022. More than $2.5 billion in venture capital was invested in the gaming space. 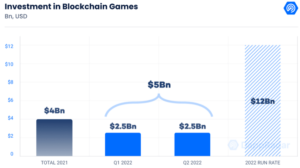 This figure equals the first three months and eclipses the $4 billion in capital raised throughout 2021. The blockchain gaming space has performed better than last year in just six months. According to DappRadar, the gaming market is on course to generate more than $12 billion by the end of the year as investment in p2e games presently exceeds that of the previous year by 33%.

Since Q1-2022, blockchain games have slightly boosted their already sizable share of blockchain activity by three percentage points. With approximately 1.1 million Unique Active Wallets (UAWs) in Q2-2022, gaming accounts for 52% of all UAWs. 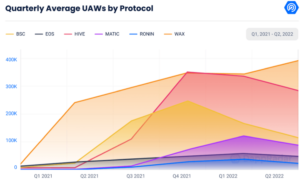 Although the overall amount of UAW for blockchain games decreased by 7% from the preceding quarter, it performed better than other areas. For example, DeFi activity dropped by 17% and NFT activity dropped by 24% during the same time period. This proves that the gaming industry is more resilient than other areas. Furthermore, compared to the 2021 second quarter, blockchain gaming activity is still up an amazing 232 %.

Wax, with 393,933 average UAWs in the second quarter, became the most well-known gaming blockchain. The platform reportedly went up 14% from the previous quarter. However, Hive, witnessed a 16% decline in active UAWs, with 283,934 average UAWs.

How Some P2E Games Fared

As per the report, Splinterlands remains the most popular blockchain game. It had 283,729 UAW at the end of Q2-2022. However, Splinterlands has changed the game’s emphasis to higher rewards for player engagement and high reliability in order to encourage longer-term growth. 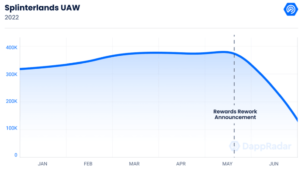 In other updates, Hive’s trading card game lost about 61% of its userbase but managed to maintain the top spot. The decline was due to a significant redesign that removed the daily login bonuses.

Another top-performing game, Alien Worlds, had a fairly good Q2-2022. Its player base stayed largely consistent, with the UAW declining just 4% in Q2-2022 compared to Q1-2022. Overall, Alien World’s UAW increased by 4% over the same time last year. The game occupied the second position, leaving Farmers World in the third slot. Farmers World had a 33% increase in users during the quarter.

Axie Infinity, meanwhile, has not fared well and is far from its best era. The game, which was once among the most well-known blockchain games, suffered an 83% decline in users since the end of the first quarter. The decline is a result of a recent attack that resulted in the theft of over $600 million worth of its native tokens. 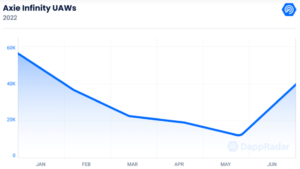 Although Axie remains a veteran of the industry, it appears that its players are moving on to greener pastures as the blockchain gaming industry develops. Newer games have emerged with equally intriguing offers and user experiences.

Finally, there are good signs that the blockchain gaming space could enjoy its best year yet. Venture capitalists such as Andreesen Horowitz are increasingly interested in blockchain gaming. According to DappRadar, the firm announced plans to invest $4.5 billion in crypto gaming. This could trigger more investors in the industry.

Speaking of the potential of the gaming industry, Pedro Herrera, Head of Research at DappRadar, said, “At this pace, over $12 billion will flow into web3 gaming projects by the end of the year to keep developing promising game projects. We are gradually seeing how Immutable-X, Gala Games, and other networks are positioning themselves to lead the rising category in years to come with impressive partnerships already in place.”

⬆️Above all, if you want to find the most undervalued gems, up-to-date research and NFT buys with Altcoin Buzz Access. Join us for $99 per month now. 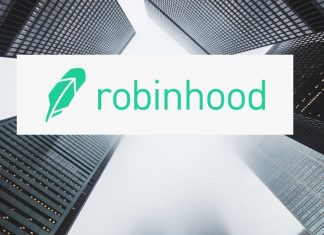