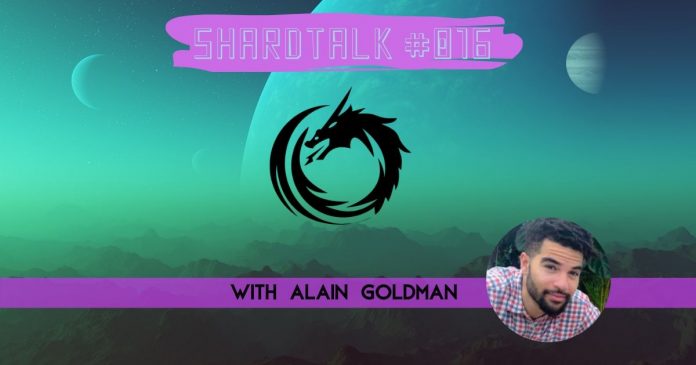 In this episode of ShardTalk, we have Alain Goldman, head developer of Tides of Magic to share with us more about his game.

Name: Tides of Magic
Genre: TCG
Quick Info: Alain was the founder and lead developer for World of Ether. In Tides of Magic, you can transform any blockchain game assets from the crypto space into cards.

Q: Would you like to share a little about your background in game development and your involvement with World of Ether?

Alain: World of Ether was a monster-breeding Ethereum game that used state channels to facilitate battling. My hands were pretty much everywhere. I did the initial presale contract, presale website, named the monsters and the monster lore. I wrote paragraphs for each monster we had.

We ended up having to chop off a good deal of text as I just had so much fun doing it. After all, you can tell I love creating stories behind characters if you just look at some of the Tides of Magic cards.

When the presale was about launch, I coded the state channel, battling between users and a number of our contracts breeding and such.

I did front- and backend as well. Bryan wrote around 70% of the rest of the launch contracts. Stanley, my brother, and Ram, the other co-founder, also took care of the frontend.

Q: Could you explain a little about your game and what made you choose to build a card game?

I spent a lot of time last summer playing what must have been the BEST CARD GAME I’ve ever played. Mind you I’ve played a lot of “YuGiOh” growing up and “Magic: The Gathering,” and “Hearthstone” as well but the best card game I’ve ever played was “Dragon Ball Super.” The ingrained comeback mechanics and the generation of resources in the game make it very fluid and fun. It inspired me greatly. In “Hearthstone” or “Magic: The Gathering” there isn’t much you can do if you’re getting steam-rolled, it isn’t quite fun. One of the best things “Hearthstone” did was adding a forfeit button. I don’t wanna sit there and watch myself get pounded for 10 minutes. That’s why we built in particular comeback mechanics, summoning minions off of habitats, and our last stand mechanic.

When I was in the middle of the development of World of Ether my mind immediately jumped into how blockchain can change that genre of card games. I didn’t quite imagine it in the same sense everyone else has. My vision was more of a super smash brothers type of game where everyone can play each other with their assets.

Q: How has the Ethereum network helped build Tides of Magic?

Alain: Ethereum allows us to quickly access funds and offset payments into a system that’s new and fresh.

More importantly, something that goes unsaid is that it forcefully limits the user base for us. There is a smaller pool of crypto-enthusiast gamers but those users are more likely to accept new technologies and interesting use-cases for Ethereum and for that I’m appreciative.

Here we can build with a small community iterate fast and learn a lot. When all the technology is ready, we can move into the consumer space and get the normies on.

Q: Would you like to share a little about gameplay? What differentiates Tides of Magic from other blockchain card games?

Alain: “Hearthstone” and other card games did something very smart in making mana auto-generate during each turn. It was great but I preferred the “Magic: the Gathering’s” system where you have to plan out mana generation. However, I wanted to increase the difficulty a bit more. Hence, I want you to have to give up something to generate mana. So I created the habitat system. There are several habitats in our game. We planned on having three per deck but we limited it to two for now. These generate mana per turn but require a minion of a spell to be placed on that habitat. If a minion of a particular type is in a certain habitat, it interacts with cool effects. For instance, it summons an extra minion. What’s also cool is that the minion isn’t lost, it can be summoned away if you pay the cost.

Alain: Well, it’s a tie between two cards. It’s either Baaam, the genesis sheep. Or Shull, the King of Slaves, the legendary horde minion. Baaam refers to the genesis kitty, and it can interact with every habitat and faction like a wildcard. It will probably be the most expensive card in the game which I am interested in. But I also like Shull because of his lore, he’s a slave-turned-king who has managed to escape and now keeps former slaves as his minions.

Q: Your idea of taking an NFT and turn into cards in your game is an interesting one. Could you give us more details?

Alain: Well, I want to be like OpenSea and include each cryptogame asset in our game. Thus, I want to integrate all of the popular crypto games into our own, period. Even if it’s just one representative. Just having one punk or one kitty would mean a lot to a person who owns that token. That’s our grand vision. It’s something that inspires us and keeps us up at night.

Alain: If any game developers that just released a new CryptoGame want us to represent their assets just join our discord and let us know, we’ll make it happen.

Besides, if anyone has thoughts on how we can make the game better or just general feedback let us know.

Is It Too Late To Invest In Cryptocurrencies?

Robert Patrinjei - March 25, 2019 0
Bitcoin has been out there for more than 10 years. The price of bitcoin has exploded over the years and people are now wondering...