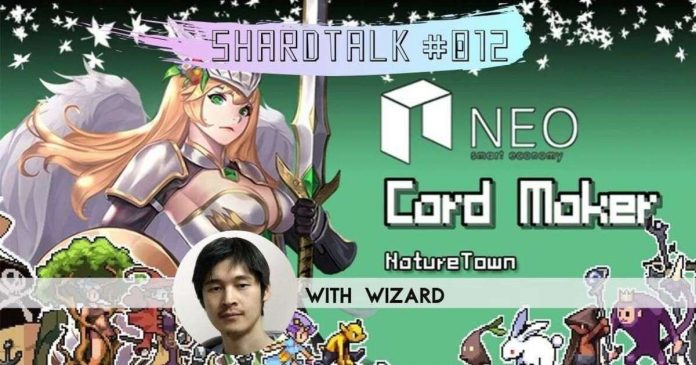 A dozen interviews have been completed and we have an exciting giveaway in this episode of ShardTalk as well. We are happy to have Wizard, founder of CardMaker to share with us all about his game. 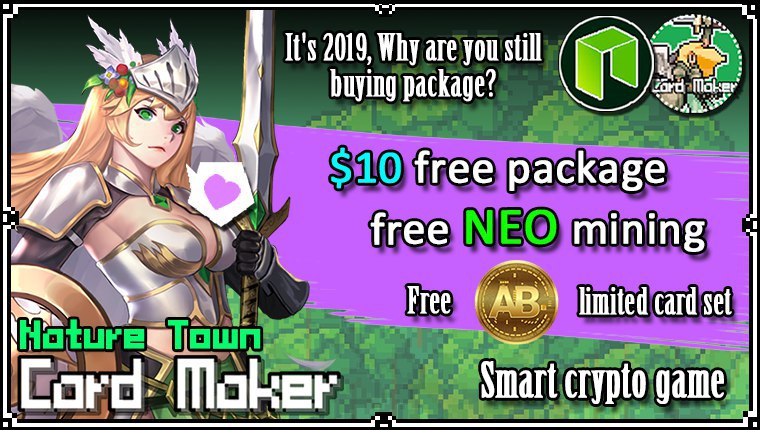 Q: How has NEO helped in the development of Cardmaker?

Wizard: NEO’s technology is quite good which is also China’s famous public blockchain. Development problems can be directly sorted with their tech person, Longfei Wang (although we almost don’t ask anything technical LOL), in terms of ecology support, after all, we took the NEO Award, so we have more favourable to help each other. 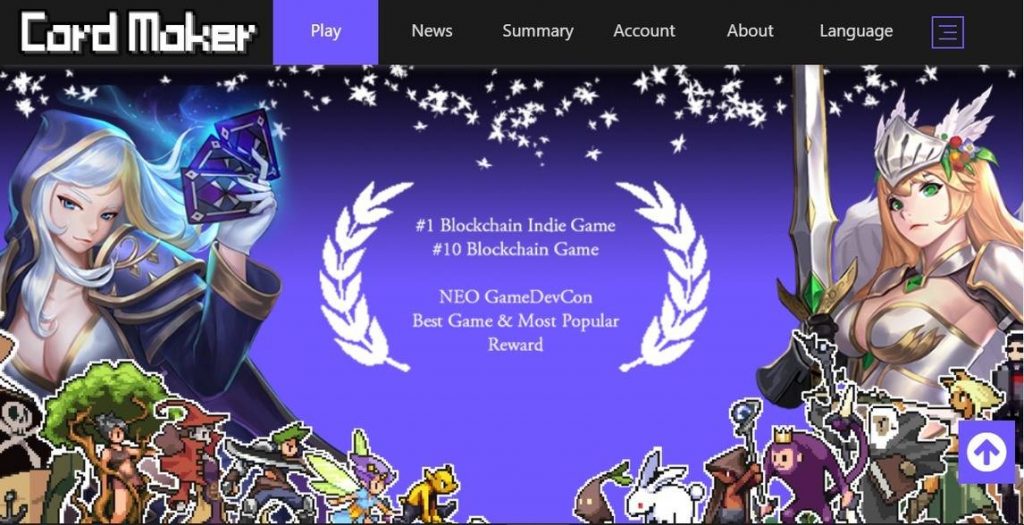 Q: Could you elaborate more about staking and how does it benefit the player and Cardmaker?

Wizard: First of all, CardMaker is the world’s first blockchain game of Staking. Thanks to the communication and discussion with some teams, these concepts are considered special. Users will think that if they consume in the game, they are being cheated. Many users, influenced by previous ICOs and some early negative games, think that crypto game is to make money from investment, which is actually wrong. But, after all, the market is there, so we just to make some adjustment. Staking itself does no harm to principal and in essence, this is a form that a conventional game transforms to a free game.

Q: Will Cardmaker be f2p forever?

Wizard: Of course, there’s no doubt about it, because given the nature of the user in cryptogames, and we think that this is the reasonable business logic.

Wizard: We never accept that users can make money from games. Do you think it is reasonable to make money by playing games? We think this is the concept that top capital use to fool the user.

But our players can actually mine NEO in-game, depending on their abilities. CardMaker is a game for the smart, and now some players have calculated the income of 2 or 3NEO per day. 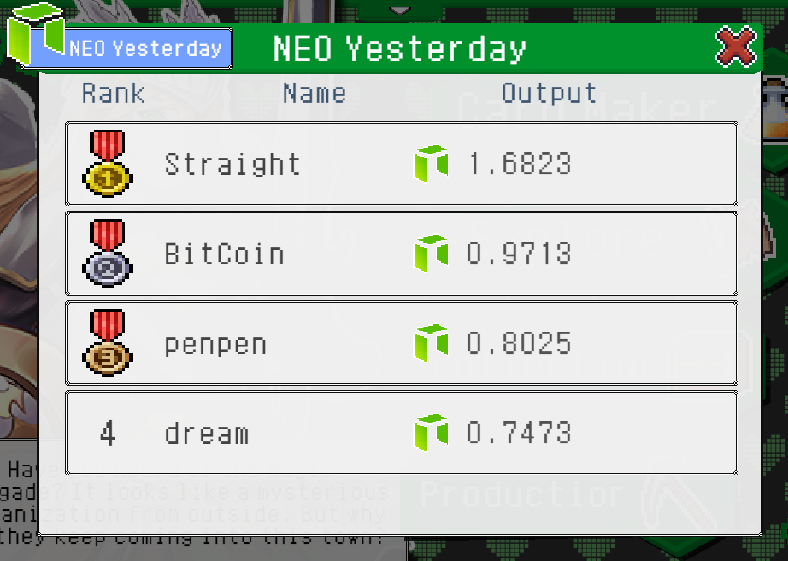 Some players may think our game is “so complicated”, which is interesting because few people can settle down to actually calculate how to “make money”. Once you’ve done your research, you’ve won over most players. It’s not like gambling, it’s a positive-sum game.

As for positive-sum games, we are also a UGC game where users can actually produce their designs and circulate them in the market, which is a natural behaviour in Internet content platforms such as youtube, TikTok and Bilibili. With CardMaker’s homemade tools perfected, users can easily create their own game stories on top of them, and then ask those who really appreciate your story to pay for it. Let’s imagine every game on Steam and the creative workshop behind it.

Q: Can you explain the importance of Cake in Cardmaker and how can you obtain it?

Wizard: CAKE is the basic token of CardMaker, there are certain output rules (for more info, please check the white paper), and it will never be re-issued. There are currently a few PGC users who create modules that get a lot of our CAKE. Of course, there are some basic ways of production in the game, and most smart users can get a lot.

At present, we have established the CAKE town of ETH and the Nature Town of NEO, and will later establish an Ice Cream Town and a Mechine Town for the public blockchains. As a cross-chain communication, CAKE will have a deflationary circulation in all towns, and each town will share the total amount of CAKE/town. We encouraged CAKE circulation and established a cross-chain trade function between the towns, with each town having its own output characteristics.

Q: Can you share with us some tips on how to play Cardmaker?

Wizard: CardMaker is an interesting Roguelike +UGC game, and we suggest playing CardMaker as an independent game instead of thinking about “making money” first. Only the users who invest in playing will get the most benefits. Calm down and you will find that our game is actually very easy to understand than many games (of course, for users who never played the game, only consider the cryptocurrencies may have some barriers, but they are not our target users,  and how many people earned real money through cryptocurrencies?).

First of all, CardMaker is a strategy card game that teaches you how to “play cards” very quickly in the first module of the game, in less than a minute.

After that, you just need to explore various modules at random. You are the one to choose the storyline of the modules, and along the way, you will get various resources. Then, you can use them to build “workshops” to produce some main tokens, such as NEO, or to produce cakes.

All NFTS in the game, such as cards and roles, come with CAKE mining effect and will be cleared at midnight per day.

OK, the above is the fast strategy, so simple.

However, if you want to have a full understanding of game, you’ll find that there’s a lot to explore in the game, which is a very sophisticated economic system, and a creative system that has all sorts of card-making, mod-making, things that you don’t see very often even in the conventional world.

More specific and detailed, you can refer to our official blog to help (https://blog.cardmaker.io/blog), but I suggest that you could first experience for an hour, then began to study the specific parameters.

Q: What are some goals you have for Cardmaker?

Wizard: Our plan is very simple, is to go into the conventional areas. Cryptogame’s environment is not yet mature, the games competition within the limited users doesn’t make sense (although we are the head traffic of it), the conventional market has huge traffic, such as Steam with 7 million active users. CardMaker will soon land on Steam as a creative game.

In the short term, we will contact more public blockchain, such as Cocos, which is a mature team in conventional industries and gathers the whole ecology traffic. So far, we have guided thousands of users for NEO.

Wizard: Let me share an interesting point about why cryptogames are worth to play, especially positive ones.

We know that most people enter the blockchain field for speculation, we can understand that it is human nature, but most people have lost a lot of money, so why will lose money? Is it simply because of some bad projects? If so, there are more dealers in the conventional, which is more mature after all, and less profitable for the speculator. This is also a point I agree that blockchain is closer to us, so everyone can participate.

So what’s causing all of us to lose money? I think it’s inflation. M0 doesn’t generate cash flow. That’s why Warren Buffett invests in real estate, stocks, like people, put money in the bank. So each of us entered the digital currency market, but if you don’t use it for investment, BTC is still M0 in your hand and does not generate cash flow (which is the main reason why Buffett is not involved in crypto).

So what if you had a program that would allow you to generate positive cash flow in the digital money market? The worst way to put M0 digital currency into a good game or project is to simply keep it and not consume it. In the way of Staking, it can resist inflation, and at the same time, it may earn some tokens.

Wizard has provided a super detailed elaboration on Cardmaker. A super enjoyable interview and an excellent addition to ShardTalk. We are also doing a giveaway where you can claim limited edition Altcoin Buzz cards in Cardmaker. Just follow the steps here and you will also be able to claim a free package and some NEO too.

ShardTalk: Interview with the Team from Koltiro Games on Spirit Clash 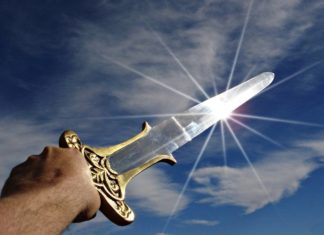 Racheal - September 10, 2021 0
The "King Crypto" - Bitcoin - and a huge part of the cryptocurrency market have been in the red zone this week. However, despite...