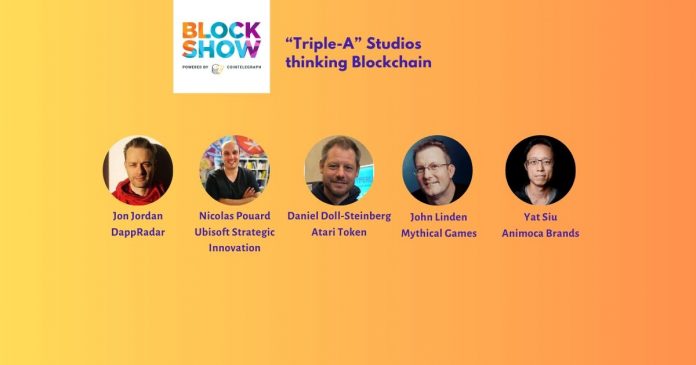 Blockshow Asia 2019 was extremely exciting. Top people from the gaming space sat down to discuss blockchain.

They had Jon Jordan, Communications Directors at DappRadar to act as a moderator for the panel. Joining him is Daniel Doll-Steinberg Director of Atari Token, John Linden, CEO of Mythical Games, Nicolas Pouard, Blockchain Initiative Director of Ubisoft Strategic Innovation and Yat Siu, Chairman at Animoca Brands.

Lots of interesting thoughts and insights were shared. Here are the juicy bits and pieces.

Q: Introduction of yourself and how you got into blockchain games

Daniel: I spent my career in disruptive technologies for over 25 years. Learned about blockchain in 2016 and became the first of the 4 founders of the Atari token project. Going into the gaming sector mainly because it has such a fast refresh cycle and I thought blockchain is something fundamental to it. I am now the director and shareholder of the Atari token project. I really look at market adoption for other technologies.

John: Former head of studio of Activition Blizzard. I ran one of the game studios there and mostly ran Call of Duty. Eventually, I left and ran another Studio called Seimic Games, which we sold last year. We see blockchain gaming as the early days of mobile gaming. We also see a platform shift. It can affect a shift in gaming of all platforms and games. This is a very exciting opportunity.

Nicolas: Joined Ubisoft 5 years ago. Exploring blockchain for 2 years now. Built a small team within Ubisoft. Working closely with Entrepreneurs Lab. And with about 10 startups.

Yat: Chairman and Co-Founder of Animoca Brands. Doubling down on blockchain and NFTs at the moment. My first job was with Atari. Been in gaming for 3 decades.

Q: Why are Triple-A game companies not getting into blockchain? Why would games and blockchain go together?

Daniel: Games take a long time to make. To build a big world there are world-building, gameplay, economy drives. After all, a lot constitutes a game. We have one of them coming out but we can’t disclose any information.

We are happy to be at a beta phase after a year and a half vs the past games we were doing which were 3 and a half years. Blockchain games need a token economy right now. The technology brings out evolution in gaming. The ability to have a blockchain-backed asset immediately creates two marketplaces. The way we view it is like a palette of tools but this palette isn’t quite ready for consumers yet. All games in the future will have an aspect of blockchain to them.

In the blockchain gaming space, there are four main player types. The whale, the hardcore who buys a lot, the casual and the free to play. The available games mainly have whales. There is no full economy yet. We have a game coming out next year that we are very excited about.  Eventually, players will not even have to think about blockchain.

Q: Ubisoft is one of those companies that openly talked about blockchain. Why do you think other companies don’t? And why is Ubisoft the only one currently taking this bold step?

Nicolas: I can’t speak for other companies. But firstly, it not a very metric type today and it is difficult for developers to use the current technology to build a product for millions of players. This is the first obstacle and also it takes time to build a Triple-A game as well. We have to learn first how blockchain can fit into current games and gain more experience first before implementing them.

Discussion about blockchain and gaming

Daniel: Just to add, what gamers can get out from blockchain in gaming is ownership. Out of the 140 billion market size of the gaming market, the average conversion rate is 1.5%. It means that everyone else is playing for free. If you have true ownership, this will increase the conversion rate.

John: One question I’ve asked is what is the win when a game comes out next year. Obviously volume and player base are very important. However, the real win will be the two emerging player types. One is the speculator trader, who buys an asset hoping its price would increase.

The other significant player type is the game entrepreneur. These players grind the game, get assets that they can sell on markets. This is the most powerful group of people who will drive the growth of a game. These people spend time to get items. They will see the value and reinvest their resources to continue to play the game. This way games have an additional way to retain their players.

John: If somebody pitches to Activision that they are going to build a token economy for Call of Duty, they will show you the door. However, if somebody was to say they are going to take blockchain technology and build a new way for eSports teams to interact with your game, bring more loyalty to your game and bring brands that influence users and have a way to profit and make money, they are going to listen.

Yat: Blockchain will add another expansion to the market. People can be passive gamers now. You couldn’t be a passive gamer before. You had to play and interact.

New gamers are around

Daniel: The demographics are changing, more gamers are emerging from the new generation. Gaming is a very fast expanding use of people’s time. Another thing I find interesting about games is that they become more and more lifelike and more engaging. Now entire ecosystems are being created which means people are going to spend more time playing games. This means new technologies like blockchain will make gaming more immersive and expand the market enormously.

John: If mobile phones just copied console, it probably wouldn’t have taken off. It has its own model, mechanics, palette of tools that created this new industry. I think the biggest thing that blockchain can do is that it is going to shift us away from the loot box economy. If you are Hello Kitty and you are going to put assets into a game, you will try to maximize the primary revenue. In blockchain, when you have a primary and secondary ability. By having time-based sales, it creates a FOMO model as well as collectors/buyers don’t know how many of the asset is going to be sold. After the sale concludes, the only way to acquire that particular asset is by buying it from another user.

Daniel: When people buy something like a car, they are going to look at the depreciation and be reluctant to spend more money on it. In terms of gaming assets by playing with the supply of an item and the ability to resell it, it gives the asset a retained value. This makes the purchase decision of the buyer much easier.

John: In Fortnite recently they had a Mashmallow event, during which people can buy skins for $15. People were selling their accounts on eBay for $400. There is an obvious increase in value and inflation game assets just because it is not available anymore. The reason that studios don’t like this is that it is very dangerous for players to do that. There will be a lot of fraud, a lot of customer service issues. But if you can address these issues through blockchain tech and the game developer gets a cut of sales as well, this can shift gaming companies towards this direction.

Q:  What will happen next year in the blockchain gaming space?

Yat: The larger titles the people are working on will all come out in 2020 and these will be the first wave of companies that will be blockchain games built by gamers. You won’t necessarily see a large quantum of users coming in. I do think people who are designing these games will have to become much more value-focused and real economists. When you do a presale, you actually think of it as how much of this is going to last, when do I need to get ready for stage 2. Economic planning and game design will be much different than before.

Nicolas: I don’t think there will be much happening in gaming. I’m looking more toward stable coins as I think it’s a way to attract more users. Because it’s all about value and if we have some kind of cryptocurrency it will help us a lot in regards to NFTs and help players to build content. You know, having a real framework to build in-game value.

John: I think we will see games that will hit a million players next year that is using blockchain. I’m not talking about a million wallets created. It will be a game in which blockchain is being utilized behind the scenes. There will be increased adoption whether players actually know they are using blockchain or not.

Daniel: I feel like it will be like Walmart looking at Amazon 15 years ago. 15 years later Walmart is tiny and Amazon is enormous and I think this is probably how we will view the blockchain gaming space.

Will having a universal payment system be viable and valuable? 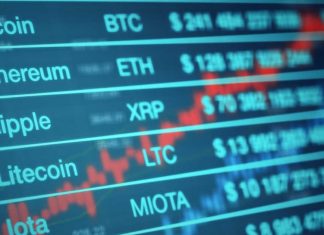 What are The 5 Best Crypto Exchanges for Altcoins?

Luc Lammers - March 28, 2019 0
A good cryptocurrency exchange is essential to start or continue investing in cryptocurrency. In this article, I will explain what I believe are five of...

Stegos Cryptocurrency May Be Battling for Life