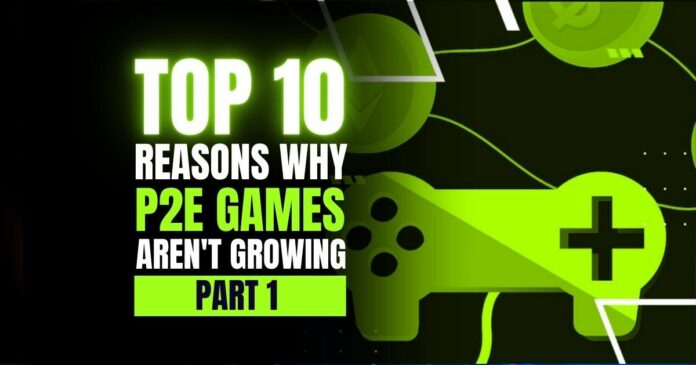 When the P2E games arrived on the scene, it looked like they were going to rule the waves. However, the sailing is not as smooth as initially expected. There are various reasons why P2E games aren’t growing.

So, let’s have a look at 5 reasons why P2E games aren’t growing. In Part 2 you can find the other 5 reasons.

1) Unfamiliarity With the Technology

The blockchain technology is still new. As a result, many gamers are not familiar with this technology. They are not comfortable with the concept, and they don’t trust it.

I’m not a fan of P2E. It’s not a scalable or sustainable solution for growing a Web3 game. I am more excited to see developers leverage blockchain technology to incentivize content creators, Esports organizations, and mod builders.

P2E needs to onboard users by making them feel that they’re not playing a blockchain game. They should not have to buy expensive NFTs before being able to start a game. There should be no crypto wallets. In other words, It can be intimidating for newcomers to set up a crypto wallet. In other words, mass adaptation is still far away with these conditions.

So, Gamer Gains is starting to integrate play-and-earn feature for consoles and PCs. Their original plan is that you don’t need crypto experience or a wallet. Currently, they are in beta testing and they build on Solana. Below is a short trailer video of one of the games they offer:

Many blockchain games build on their own unique platforms and blockchain infrastructure. This makes it difficult to integrate with existing gaming communities. However, many firms who invested in the metaverse try to achieve this. They are looking for ways that an NFT is interoperable on various blockchains.

For example, your avatar should be able to move around in various games. These games can call their home on a variety of blockchains. Venly is a company that offers the Venly NFT ring. It gives you perks and benefits in a growing list of Web3 games. For instance, in The Sandbox or Vulcan Forged. Another company working on a solution for interoperability is the DeHorizon Foundation. They are building their DeVerse game. Over time, their metaverse should cooperate with other games.

The following picture shows some cross-metaverse options for the MetaRing One by Venly:

Many blockchain transactions are expensive. The Ethereum blockchain is notorious for this.  As a result, gamers have a hard time making in-game purchases and transactions.

The well-known Axie Infinity game increased the transaction fee by 1% in March 2022. This caused a backlash from users, who were not happy about this. Add to this gas fees, and it can become expensive. In May 2022, Ethereum gas fees ranged from $9 to $50. After the Merge on Ethereum, they dropped to $3 to $5.

On the other hand, Immutable X charges no fees for minting or trading NFTs. However, they do charge a 2% protocol fee. You pay this fee for every transaction on their platform’s orderbook. They are integrating their orderbook in as many NFT marketplaces as possible. For instance, OpenSea, GameStop, or the Illuvium Market. See the picture below:

Many blockchain games still have complex game mechanics. This can lead to frustration and confusion by players. Simply because they find it difficult to understand and navigate. A much heard issue is that blockchain concentrates too much on the earning module. Instead, they should give more attention to the fun aspect.

Games must be challenging and interesting to play. However, at the same time, they must be easy to understand and offer a simple onboarding experience. For instance, Star Atlas is a long-awaited game with amazing visuals. It runs on Unreal Engine 5. You can already buy spaceships and land, choose factions, and race. But, due to its complexity, the devs launch this game in stages. See the video below to get a glimpse of the outstanding visuals in Star Atlas:

Many blockchain games still have scalability issues. These can make it difficult to handle high levels of usage and transactions. Part of this issue is that blockchain technology is new. For example, the Ethereum blockchain was not developed with gaming in mind. But, many games run on Ethereum. Games need fast and cheap transactions and Ethereum doesn’t offer this.

This is one of the reasons that we see many so-called sidechains that build on top of Ethereum. For example, Polygon or Immutable X. One of the most popular blockchain games is Axie Infinity. They faced the same problem. So, they came up with a solution, and they built the Ronin mainnet. This is also a sidechain built on top of Ethereum. With this mainnet and the Ronin bridge, they have increased their scalability. The popularity of Axie has declined quite a bit, compared to a year ago. But the picture below shows the daily active addresses on Axie. A year ago, they most certainly needed that scalability:

This is Part 1 of two articles on why P2E games aren’t growing. We discussed 5 reasons, and in Part 2, we discuss another 5 reasons. 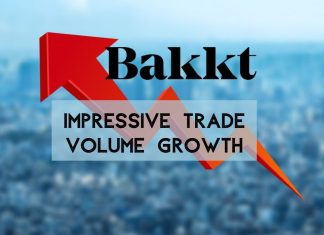 Deepika Garg - November 7, 2019 0
Bakkt failed to receive the anticipated market's response at its launch. However, after witnessing underwhelming trading volumes in September, it seems that its gaining...

How To Use The Relay Bridge