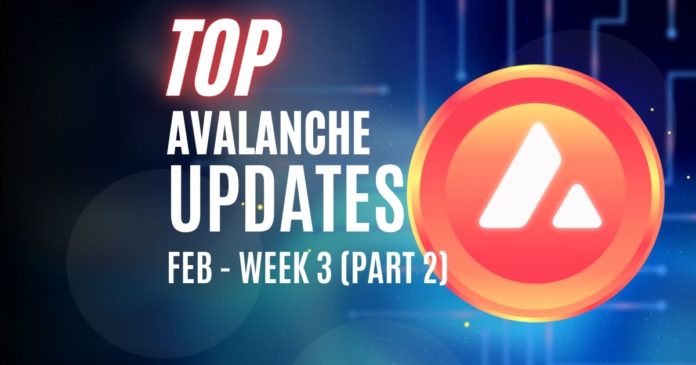 Avalanche Network is a direct competitor to Ethereum. The platform boasts incredible scalability and transaction speed. This gives it an edge over other blockchain networks. As a result, multiple projects have pitched their tent on Avalanche, bringing a series of activities to the platform every week.

February was a remarkable week for Avalanche users. Read our previous update articles to find out more. Avalanche saw multiple partnerships, integrations, and upgrades. As the month comes to an end, here are the updates from Avalanche’s fourth week of the month.

Avalanche’s community has grown almost ten times its size from last year. As of May 2021, the platform had merely crossed 70,000 followers. However, in February 2022, the network announced that it had reached 600,000 followers on Twitter. This growth is not only remarkable, but significant for assessing how popular the scalable blockchain has grown in a year.

Furthermore, on-chain metrics point to huge growth in Avalanche’s community. In addition to a recent surge in the AVAX price, Avalanche now ranks fourth in terms of TVL. Several new projects have added value to the network, bringing a new wave of users to the platform.

WOW! The community is growing almost as fast as an #Avalanche transaction, with people joining from all over the globe.

What part of the world are you from? Comment below ⬇️ https://t.co/XZ0rEtOtJZ pic.twitter.com/8CnkZLZpBI

One of the big events in Avalanche’s community was the launch of ZenLedger. The platform is a crypto tax software tool that lets users calculate their tax liability based on aggregate transactions. According to the announcement, Avalanche’s users can now integrate their public C-Chain addresses to get a full crypto tax report.

Furthermore, ZenLedger’s fame in the crypto space is growing by the day. The crypto tax platform now supports about 30 DeFi protocols and over 400 exchanges. ZenLedger also supports NFTs, a variety of wallets, and multiple blockchains.

3. Avalanche Braces Up for its Barcelona Summit.

Earlier this week, Avalanche shared more updates for its upcoming Barcelona Summit, which will be held from March 22-27 at the Poble Espanyol in Barcelona. Also, Avalanche plans to use the six-day event to bring more exposure to trending Web3 issues. In addition, the summit will host several thought leaders, academics, and developers.

A list of well-ranked speakers will take the stage in Barcelona late next month. These include Emin Gün Sirer, founder and CEO of Ava Labs; and Sergey Nazarov, founder of Chainlink. Furthermore, the CEO of Aave, Stani Kulechov, is one of the identified guest speakers.

The event will also feature government leaders and other notable individuals from several organizations. Avalanche said it would share more updates in the coming days.

The time has finally come to secure your spot at the #Avalanche Summit, taking over the Poble Espanyol in Barcelona, March 22-27, 2022!

Learn about the latest Avalanche updates and meet like-minded innovators creating the future of Web3.

The RSS3 protocol and nodes now fully support the Avalanche C-Chain network for content and data indexing. The platform began researching and adapting the Avalanche C-chain early this year, following a huge amount of feedback from its community. Following the collaboration, both projects would work hand-in-hand to bring data and information flows to Avalanche apps via RSS3. Furthermore, Avalanche’s community would provide cheap and fast alternatives to RSS3 applications.

RSS3 aims to be the feed of Web3, which intends to create a decentralized environment for content and gaming apps.

We are excited to announce that as of today the RSS3 protocol and nodes are fully supporting the @avalancheavax network for content and data indexing. https://t.co/wzThM4bE3A pic.twitter.com/JORWREXPBf

Avalanche’s network attracts a lot of attention for its projects. As a result, Avalanche recently surveyed the most socially engaged projects. According to a tweet by the platform, Trader Joe, with a market cap of $186M, stood in first place with about 1.87M engagements. The platform is one of the biggest DEXs on Avalanche.

In second place was Avalanche Avax, with a 1.41M engagement. Frax Finance emerged third, with a market cap of $2.6B and a social engagement of 1.01M. Social media engagement data gives a glimpse of people’s interest in Avalanche projects. So far, it appears that Trader Joe has more people interacting with it across its social media platforms. 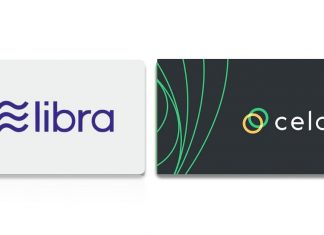 David Abel - March 14, 2020 0
Some members of the Libra Association, the entity behind the Libra Project, switched sides recently. They are now supporting a rival project named Celo...

Will ETC Maintain Its Rally Ahead Of The Ethereum Merge?