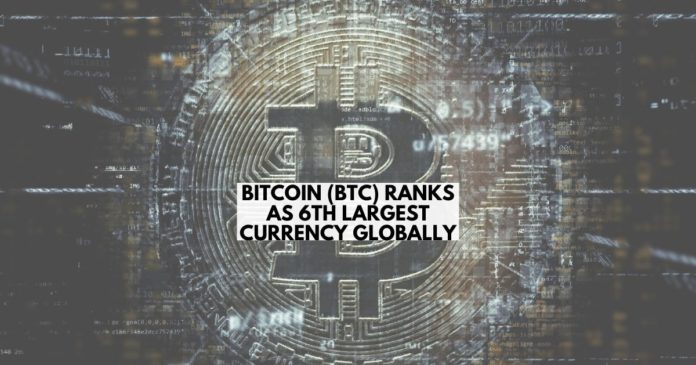 Bitcoin (BTC), the apex digital currency in circulation, has been declared the sixth-largest global currency.

Bitcoin (BTC) surpassed the Russian ruble (RUB) to take its place and become the sixth-largest currency in the world. Notably, this feat was achieved just after a decade of Bitcoin (BTC) being established by an anonymous person or group by the name Satoshi Nakamoto.

The top digital currency since it’s creation, BTC has enjoyed remarkable growth over the last decade. The last six years has been tremendous as Bitcoin has increased from roughly $200 in value to $10,958 today.

The report by FVP Trade notes that there are differences in how the circulating price is computed for cryptocurrencies and fiat currencies. However, the report does compare the total market cap of Bitcoin against the M0 money supply of the various national fiat currencies.

Notably, M0 refers to the most liquid form of money – cash. This includes central banknotes and coins.

While Bitcoin (BTC) has surpassed the Russian ruble, there are five fiat currencies that have a greater market capitalization.

The number one fiat currency in the world is the U.S. dollar (USD). The U.S. Federal Reserve has disclosed that there is currently a total circulating supply of coins and Federal Reserve notes worth $1.95 trillion.

Holding down second place in the world’s top five fiat currencies is the Euro (EUR). This fiat was established in 2002 by the European Union and its supply has grown significantly since then. Official data from the EU suggests that there are 1.38 trillion euros in circulation, which equates to a market cap of $1.54 trillion.

The Chinese Yuan (CNY) comes in at third place in our current world currency rankings. TradingEconomics’ data reveals that there are about 8 trillion Chinese Yuan in circulation. This amount is worth $1.15 trillion.

Lastly, the fifth largest currency in the world by market cap is the Indian rupee (INR). There are more than 31 trillion INR in circulation, worth roughly $425 billion.

Countries leading in the adoption of cryptocurrency 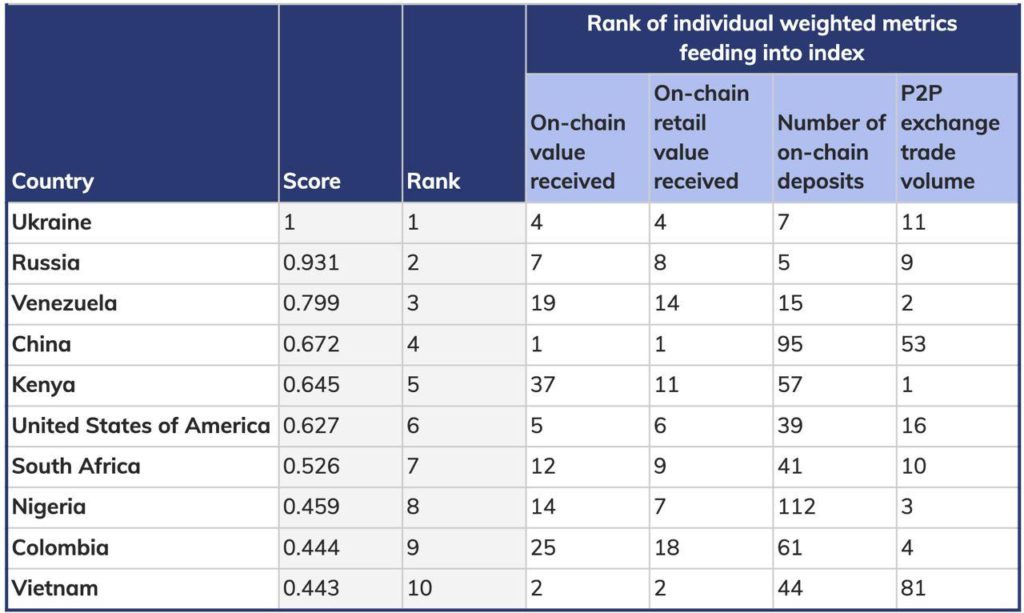 Chainalysis examined 154 countries for its study. It is interesting that the study found that only 12 countries were given the lowest rank of zero, meaning that interest in cryptocurrency is global in nature.

To summarize the chart above, the top 10 countries for crypto adoption are: Ukraine, Russia, Venezuela, China, Kenya, the United States, South Africa, Nigeria, Colombia, and Vietnam.