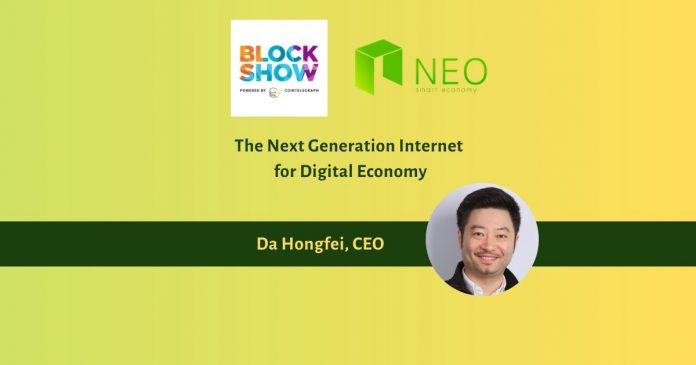 At the BlockShow Asia 2019, NEO founder Da Hongfei gave a speech on the current state of the decentralized web and the next generation internet for a digital economy.

CEO of NEO, Da Hongfei pointed out the obvious, that’s how the internet stands as an exceptional invention. It also almost looks perfect. But, Da Hongfei questioned the validity of that perception.

Furthermore, he pointed out that horizontal isolation created silos that prevented cross-platform interactions. Thus, this isolation problem leads to monopoly, centralization, abuse and single point of failures. He also cited the Cambridge Analytica scandal where 87,000,000 users got exposed. As well as, the Equifax hack, where 147,700,000 Americans’ personal information got stolen from Equifax servers.

Besides, concerning vertical friction, Da Hongfei said it hinders the fusion of digital, physical and biological realms. Also, citing other challenges with the present decentralized web such as the immaturity of enabling technologies (such as IoT, 5G, brain-computer interface). As well as, the lack of internationally accepted digitization standards, digital identity, and regulations.

Da Hongfei emphasized that these challenges with the present decentralized web places a constraint on the fusion of the physical, as well as, the biological world (called the industrial revolution 4.0).

However, the NEO CEO proffered some solutions. He believes increased competition helps, users, should also get data ownership. As well as, other ways like open-source, permissionless, interoperable, decentralized, data rights protection, and privacy-preserving.

Conclusively, Da Hongfei cited Gartner, stating that the blockchain industry carries the capacity to generate $3.1 trillion of value by 2030. That’s an equivalent value to the entire market cap of FAANG. Thus, raising the question concerning the future of the internet.

Quoting him: “In the future, I believe today’s applications can become legacy applications. Also, new blockchain applications go from marginal to alternative, and eventually to the mainstream.”