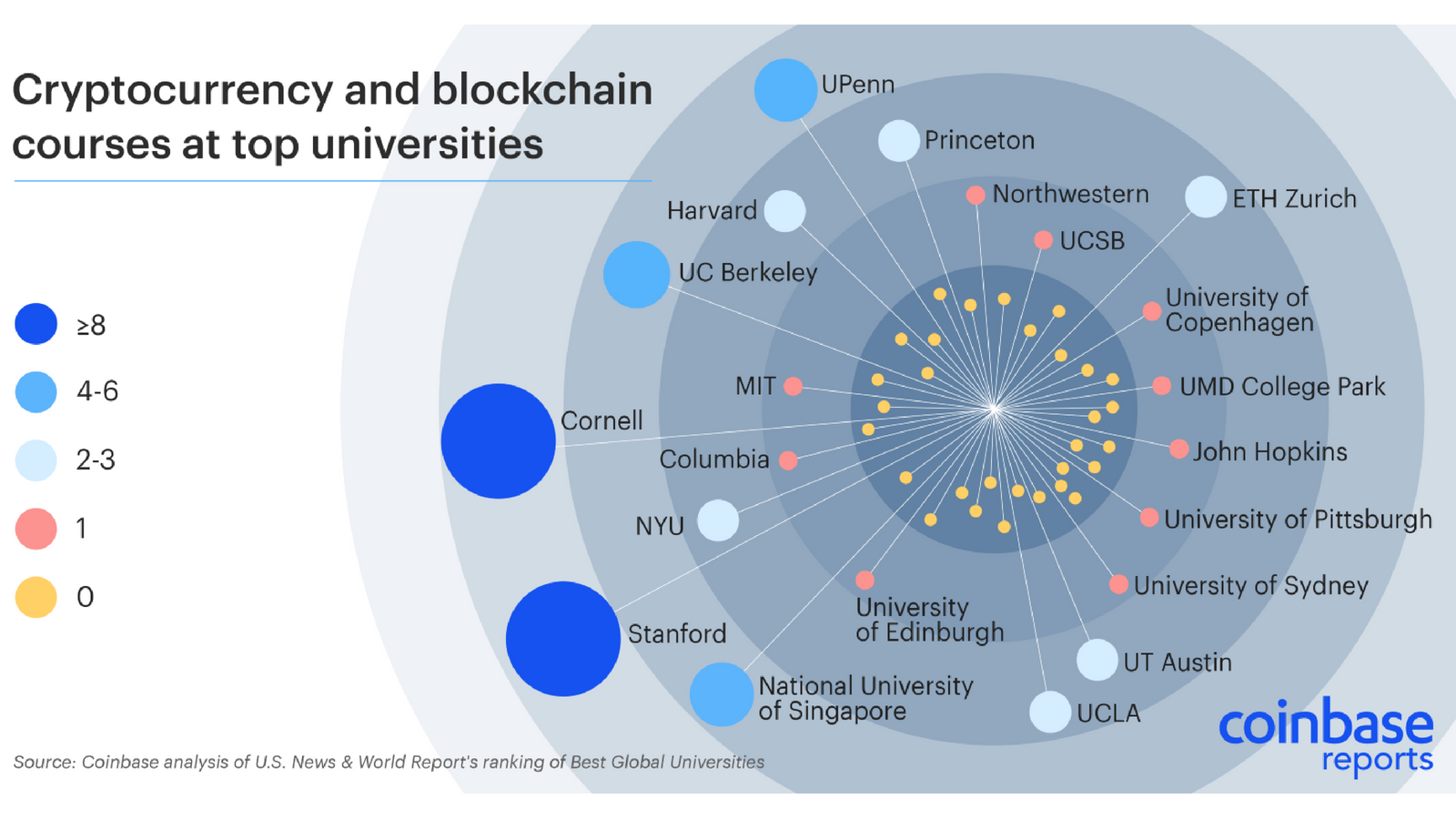 Interest in cryptocurrency is rising in schools, many top universities worldwide are now offering classes on blockchain and/or cryptocurrency. At New York University Stern School of Business, they started offering a class on blockchain in 2014, 35 students signed up. Fast forward to 2018 and there are now about 230 students signing up for the same class. The class size is now so big that it is being offered both in the spring and fall semesters.

“A process is well underway that will lead to the migration of most financial data to blockchain-based organizations. Students will benefit greatly by studying this area.” -David Yermack, Finance Department Chair at New York University Stern School of Business and creator of the university’s first blockchain course

The schools with the most classes offered are in the U.S. though, with Stanford University, Cornell University, and the University of Pennsylvania all offering at least six classes. The Coinbase survey found that there’s high demand for crypto and blockchain courses across a diverse spectrum of students, which shows that the interest in alternative economics nowadays has grown. Many of these universities are creating research centers and adding crypto-related courses across a variety of different departments like finance, anthropology, law, political science, engineering, and mathematics, these aren’t just computer science classes anymore. 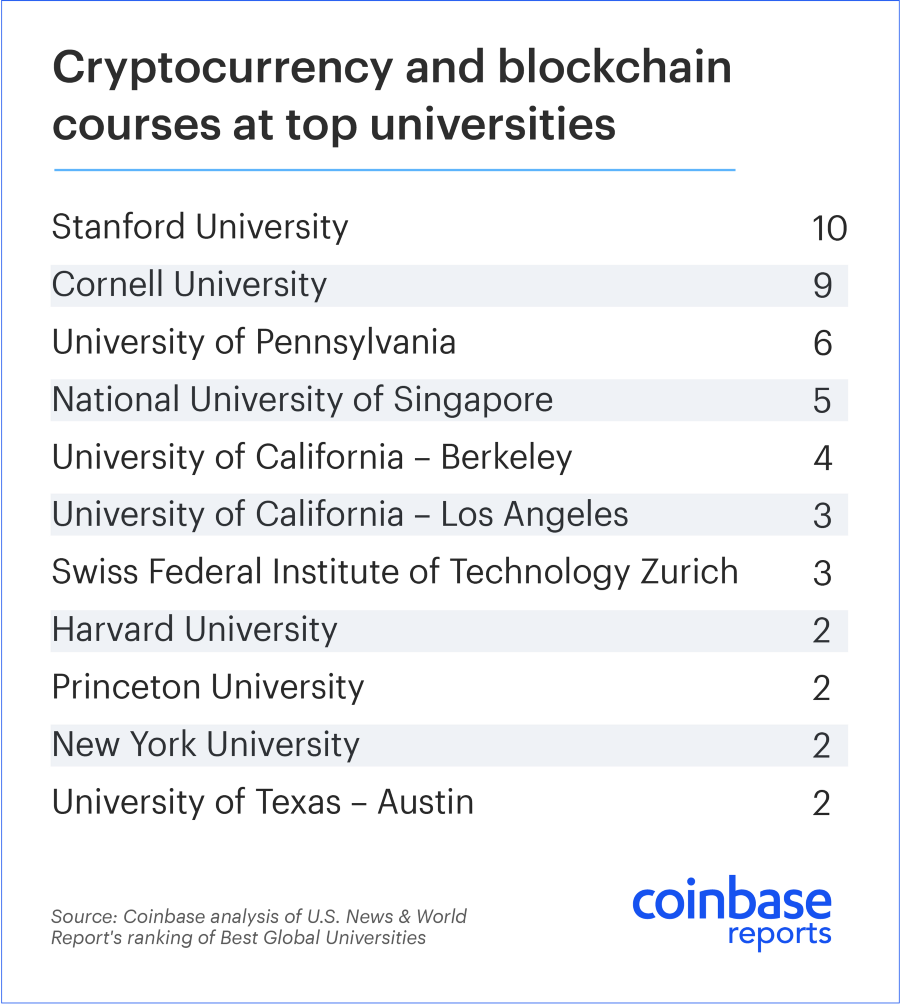 Bill Maurer, the dean of the School of Social Sciences at the University of California Irvine, said:

“Students today are really thinking deeply about economic issues and alternative economic futures. Teaching about this kind of stuff now can be really powerful for students that are trying to find their own way and envision what kind of possible alternatives there might be to the prevailing economic system.”

“Learning about financial systems prepares students in all programs for the job market today. There’s a huge demand out there, especially in the design space, for people that have the skills that we train anthropologists with, understanding the human side of technology.”

In their study, over 25% of polled students from all majors sais that they want to take a cryptocurrency course, while 18% actually own some cryptocurrency themselves. This is great news for the future of this space since academics are joining the space to properly educate students on the potential of this technology. Many students are already having results. Benedikt Bünz, a doctoral student at Stanford focusing on cryptocurrencies said, “if you’re an expert in cryptocurrencies and cryptography you’ll have a difficult time not finding a job.” Harvey, a professor at Duke said, “You need to prepare your students for the future…blockchain is not going away.”

Case in point, Coinbase is ramping up its efforts to recruit college students and recent graduates throughout this academic year.

“It’s exciting to see widespread interest in cryptocurrency and blockchain technology taking off in the global academic community, including students attending the top universities in the world,” Nat McGrath, vice president of people at Coinbase, told CoinDesk. “That’s one of the reasons we’re focused on building partnerships with underrepresented student groups across college campuses, and we look forward to expanding these efforts in the spring.” 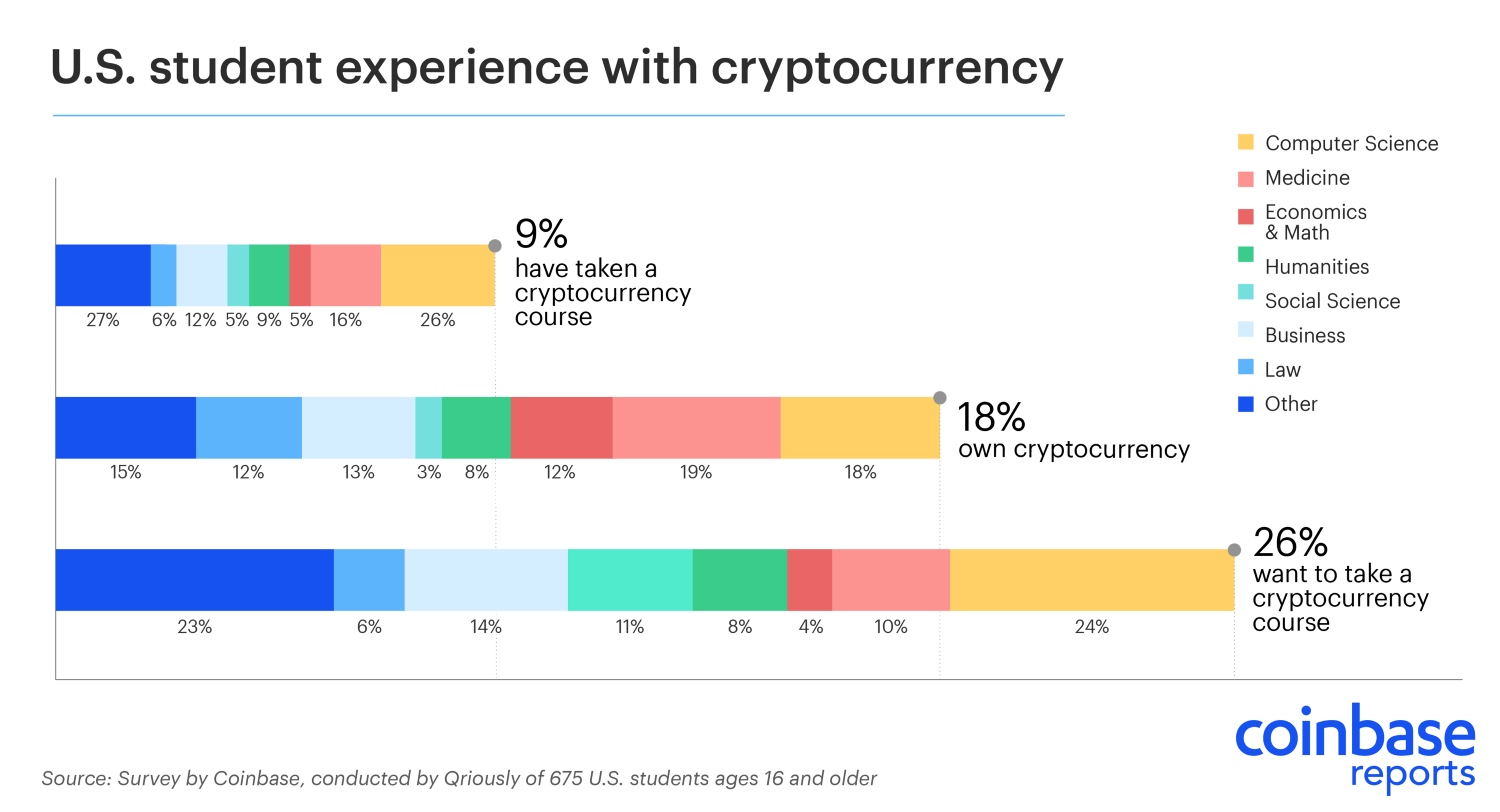 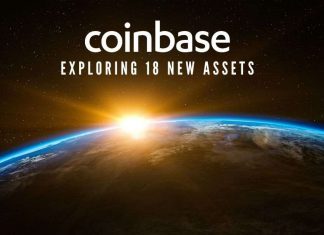 Deepika Garg - June 19, 2020 0
Every time Coinbase announces a new slate of digital assets under review, it makes the news. According to an announcement on June 12, Coinbase...