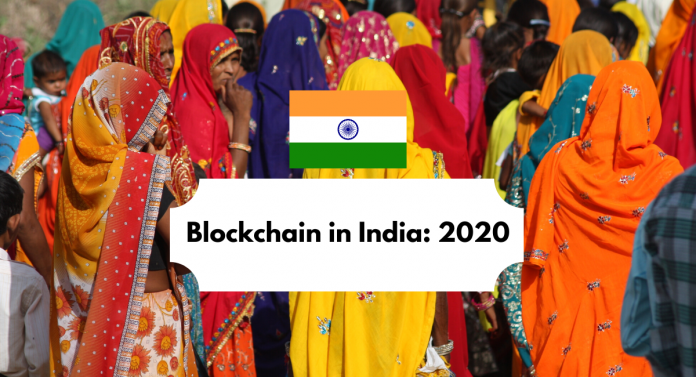 Blockchain technology has come a long way. Starting from mere promises, it now powers a handful of significant projects. Thus, a number of public bodies, enterprises, and organizations around the world are adopting it at a steady pace. In India, the story is no different.

In 2018, India’s Reserve Bank banned cryptocurrency-related transactions through banks. Though the ban is still there, the blockchain working space seems to be expanding. Let’s take a closer look.

Many state governments have initiated different blockchain projects that will help address different social needs. Currently, most of these projects are in the pilot stage. Yet, state governments are showing a progressive approach in welcoming start-ups and providing them with a suitable environment to participate in these initiatives.

That said, the private enterprises across all key industries in India are also identifying different applications of blockchain. The Banking, Financial Services and Insurance (BFSI) sector is the leading adopter of the new technology. However, other industries, including healthcare, retail, and logistics are not lagging behind.

NITI Aayog, the Indian government’s subsidiary, hosted the International Blockchain Congress in 2018 along with the state governments of Telangana and Goa. The idea was to promote blockchain adoption in the country and to outline the present scenario.

In 2018, the Reserve Bank of India set up a group of blockchain app development researchers. Their goal is to create a cashless and decentralized banking system.

India ranks 6th in the world for blockchain patent approvals. The footprint is therefore strong.

According to a report by Dappros, a London-based consulting firm, India has the second-largest number of blockchain developers — 19,627 —  in the world, following the United States.

In February 2019, the Finance Minister, Arun Jaitley, stated that the government was exploring the use of the blockchain for promoting the digital economy.

At the same time, the NITI Aayog is considering using blockchain technology for the fertilizer and drug industries.

Many Indian states, including Karnataka, Telangana, Kerala, and Maharashtra, are willing to use blockchain for the voting procedure. Ultimately, making it transparent and secure.

As technology continues to reshape industries, the future of blockchain looks bright. However, there are also certain challenges ahead:

Lack of regulation regarding cryptocurrencies has resulted in ubiquitous uncertainty. As a result, blockchain start-ups aren’t fully sure how to operate.

The decision by the Reserve Bank of India to prohibit banks from carrying out crypto transactions has created confusion. Many thought that this meant that crypto is completely banned in India. Consequently, regular Indian investors hesitated to invest in blockchain startups.

New technologies require specific skills. Most of India’s IT Companies are currently offering blockchain services and hence there is a huge demand for individuals with know-how.

Yet, there are simply not enough people. Besides, at universities, the courses are limited. As a result, blockchain companies are trying to fill the gap by giving cross-domain training to the existing employees.

For public-based blockchain apps, the cost of network maintenance and validation of transactions is high.

Since blockchain technology is still in the research phase, many people are not aware of it.

The investments in the Indian blockchain system are comparatively low. Accordingly, they stand at less than 0.2% of all the global investments. In total, blockchain companies have managed to secure a total of $8.5 million through VC firms and ICOs.

Due to the regulatory and legal risk around blockchain in India, global investors are finding it difficult to invest in Indian start-ups, even though they develop innovative solutions. Some of the crypto exchanges such as Unocoin and Zebpay were forced to pack up.

Consequently, several India-based investors are raising funds through VCs and ICOs in other jurisdictions such as Malta, Singapore, UK, Switzerland, etc. that have a favorable regulatory environment.

The government is playing an important role not only as a regulator but also as a consumer of blockchain solutions in India. Currently, 40+ Blockchain initiatives are being executed by the public sector in India, with ~92% in the pilot/POC phase and ~8% projects in the production phase.

Areas where blockchain research and innovation are under development

Below is a detailed report from NASSCOM. It shows the industries chosen by different states. 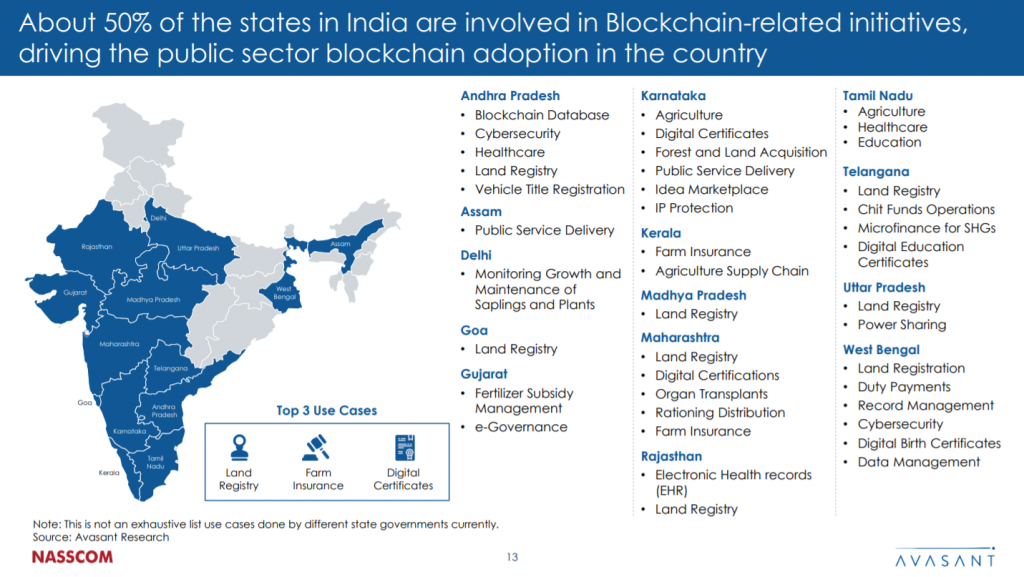 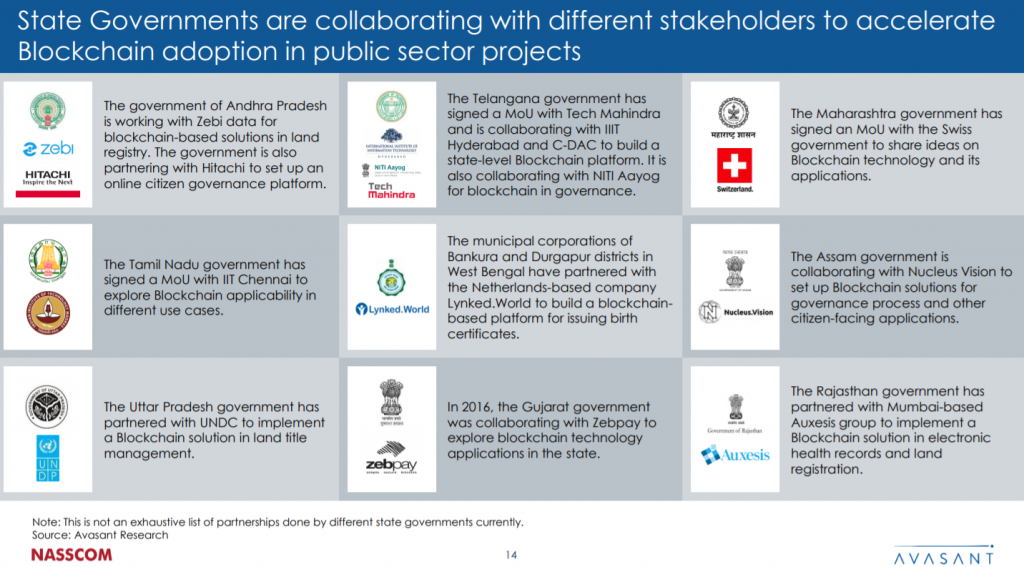 In India, the BFSI is adopting blockchain at the fastest pace. Healthcare, retail, and manufacturing sectors are also in the game. 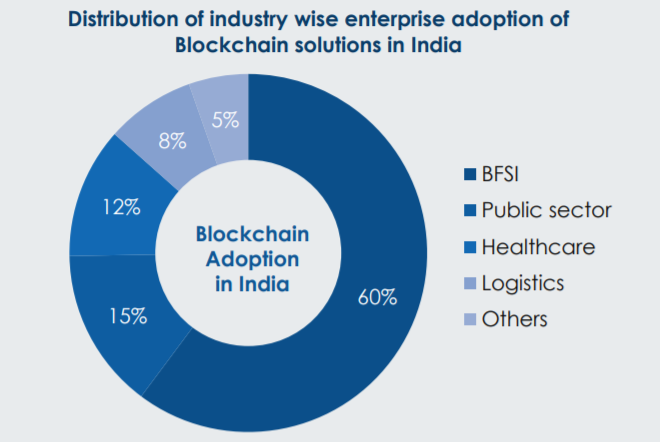 There is no doubt that blockchain has caught the world’s attention. To that end, India is also trying to streamline its fast-growing economy to fully explore blockchain’s potential.

Currently, there are decent Indian projects like Matic and Zebi. It’s worth remembering that the Indian market is big, and the recent Wazirx acquisition by Binance proves it.

All in all, India needs to step up its blockchain game. And give the new technology a chance to shine. 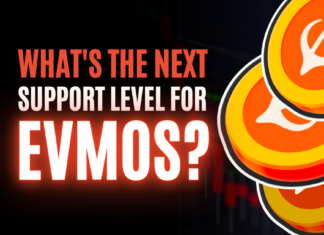 What’s The Next Support Level For EVMOS?

Anurag - July 13, 2022 0
Built on the Cosmos blockchain, Evmos is a proof-of-stake (PoS) technology. In essence, it's also a significant interoperability move for the Cosmos network. It...

Why Is Meta Creating Physical Stores?