MyMonero CEO, Fluffy Pony, co-founded Tari which brings a second layer solution to Monero. Tari will help with scalability, node syncing, and research on atomic swaps and Lightning Network on the Monero platform.

Last week, it was announced that Monero (XMR) will be getting a merged side-chain, Tari, which was founded by three people, Riccardo Spagni (Fluffy Pony), Naveen Jain, and Dan Teree. Y. The chosen language for this protocol software is Rust. The main reason it was chosen, was to prevent a brain drain from existing Monero developers.

This layer 2 solution will allow experimentation without impacting Monero’s decentralization. Tari will allow developers/researchers to learn how to better scale Monero on-chain and speed up the initial syncing of nodes. Tari will have the same security as Monero and will allow atomic swaps between the currencies and potentially other currencies. Most importantly, the developers will be working on implementing Lightning Network routers to support both Bitcoin and Monero. This could open the flood gates for ICO’s to be built on the Monero Platform.

Even though it is open sourced, at the start it will be more centralized. The Tari organization and Tari Labs will be leading the project to start but over time will be adding more developers who will work with community developers. The most notable person on this project is Riccardo Spagni (Fluffy Pony) who has stepped down as the CEO of MyMonero, GloBee, and over the past year has reduced his responsibilities on Monero developments. 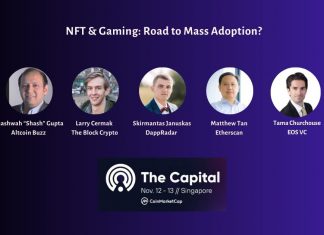 Ezekiel Ng - November 17, 2019 0
It was a wild week. The Capital by CoinMarketCap took place in Singapore. And one of the panels was about NFT & Gaming. Altcoin Buzz Co-founder...