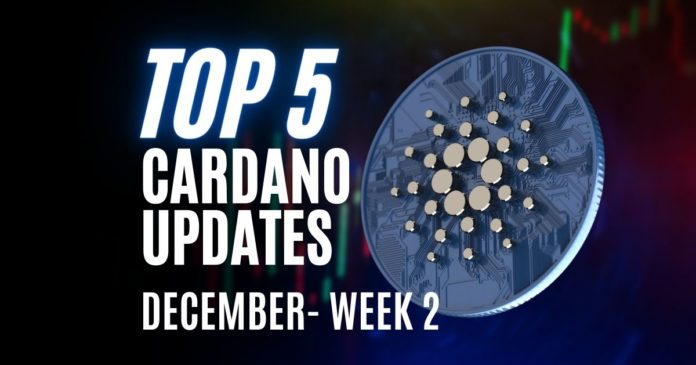 There are some updates in the Cardano ecosystem recently. Therefore, Altcoin Buzz takes a look at the latest updates from the second week of December to keep readers informed.

Last week, Cardano’s AdaSwap launches its token on an IDO Launchpad. In addition, we will also see the top-performing Cardano projects. Let’s look at these Cardano updates in detail.

1 – Cardano’s AdaSwap Is Launching its Token

AdaSwap, a Cardano-based decentralized exchange (DEX) is commencing its token sale on Cardstarter. The DEX company is carrying out this initiative with the aim of ensuring the growth and development of the platform.

Notably, AdaSwap will be selling 80 million $ASW tokens at the of $0.005 per token. Thus, generating the sum of $400,000.
It’s important to note that this is the first phase of the token sale. There will also be a 50% token sale at TGE, and then a 50% token sale a month afterward.

Besides, AdaSwap will bring the following features to the Cardano ecosystem:

AdaSwap CEO, Itay Levy is “excited” to work with Cardstarter. Also, stating that this initiative will act as a good foundation for the company to build on.

Here’s the rating of Cardano-based projects is in accordance with their price performance with a seven-day timeframe.

Based on the report of CoinMarketCap:

In the last 7 days, @adax_pro has gained the most with nearly 30%, followed by @IagonOfficial. #Cardano #ADA $ADA pic.twitter.com/a3yRCnyIup

Data from on-chain analysis system, Coin Metrics shows that the highest $ADA token owners ($ADA whales) command about 94% of $ADA circulating supply. Looking at specific figures, this is about 31B $ADA of the 33B $ADA in circulating supply.

Furthermore, the amount of $ADA tokens in their possession consistently increased since the start of the year. It’s increased by more than 1B (about 3%) in this year alone.

Notably, this shows that irrespective of the downward trend in $ADA prices there’s still a lot of potentials in the project and $ADA whales are still counting on it. There has also been a number of key developments on the platform.