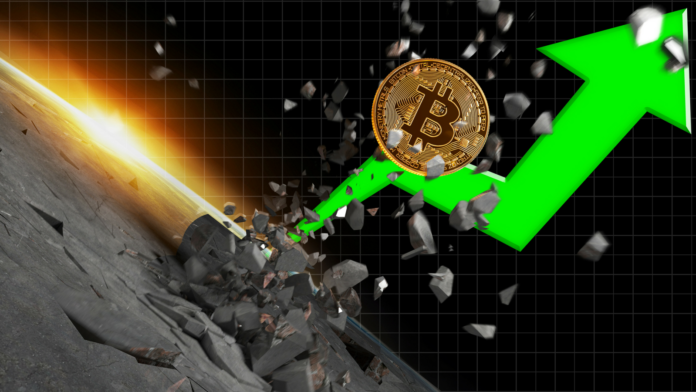 Today, October 15, Bitcoin rallied from $6300 to $6800 within 1 hour. Bitcoin surpassed the major resistance level at $6800, briefly reaching $6900 before it lost some steam. A one-month high for Bitcoin, despite all the predictions that Bitcoin was going to fall back to the $5000 region. With that, after weeks of downturn, a bullish sentiment is now dominating the market. A green light for a next bull run?

Today, Bitcoin reached $6800 after a rally of only 1 hour. The dominant cryptocurrency has fallen a bit since then but is at the time of writing moving in the $6700 region. Bitcoin even reached $6900 for a very short period. After Bitcoin fell from $6500 to the $6200 region last week, analysts predicted that another fall to the 5k region was inevitable. It now seems that the market, and Bitcoin, in particular, has found its way back up again. For now, at least.

Despite the sudden drop of Bitcoin last week, a bullish sentiment and positive headlines have been dominating the space over the last month. Although over the past week, some headlines covered 5k predictions from well-known analysts, the news that big players like TD Ameritrade and Yale were entering the space, already created a bullish feeling in the market.

Where is Bitcoin going next? If the bullish sentiment can be held, Bitcoin is going to shoot back to $6800 and then face some resistance. Breaking above the $6800 mark could lead the price of Bitcoin to enter the $7,000 region in the short-term and then even $7500 is in sight.

As the daily trading volume of major digital assets improves and exchanges see a demand in volume, it may be possible for more institutional investors to potentially eye an entrance into the crypto market in the upcoming months.

Binance is Giving Away up to $500 BNB Through MyBinance Contest

Luc Lammers - April 7, 2019 0
Binance, the leading cryptocurrency exchange, has started a contest that rewards participators for their creativity. You can win up to $500 BNB just by...