Today, July 24, Bitcoin rallied from $7700 to $8300 within 12 hours. Bitcoin surpassed the major resistance level at $8,000, reaching $8,300 rather easily. A two-month high for Bitcoin, despite all the predictions that Bitcoin was going to fall back to the $5000 region. With that, after weeks of downturn, a bullish sentiment is now dominating the market. A green light for a next bull run?

Today, Bitcoin reached $8,363 after a rally of only 9 hours. The dominant cryptocurrency has fallen a bit since then, but is at the time of writing steadily moving in the $6200 region. The total market cap has even reached the level of $300 billion. The last time the total market cap reached $300 billion was already 6 weeks ago, on June 12. With that, it is fair to say that the market, and Bitcoin in particular, has found its way back up again.

Because of the sudden bullish sentiment, positive headlines and news items are now dominating the space. Where, over the past weeks, most headlines got dominated by 5k predictions from well-known analysts, these predictions are now nowhere to be found (yet). Brian Kelly, the CEO at BKCM and a long-time contributor to CNBC’s Fast Money, already said yesterday:

“Institutions are starting to get serious about bitcoin. I can tell you from the calls I’ve been getting, people that looked out in december didn’t like the price, are coming back now and saying ‘this thing is not going away, we need to understand what it is, where does this asset class fit into our portfolio.’”

To pump up the bullish feeling amongst crypto traders, Changpeng Zhao, the billionaire CEO of Binance, the world’s largest cryptocurrency exchange by daily trading volume, tweeted:

With that tweet, CZ sparked the enthusiasm of twitter followers, who massively started posting GIFs and memes of party busses, rockets and lambos.

Where is Bitcoin going next? If the bullish sentiment can be held, Bitcoin is going to face major resistance levels at $8,300 and after that $8,500. Breaking above the $8,300 mark could lead the price of bitcoin to enter the $9,000 region in the short-term.

As the daily trading volume of major digital assets improve and exchanges see a demand in volume, it may be possible for institutional investors to potentially eye an entrance into the crypto market in the upcoming months. 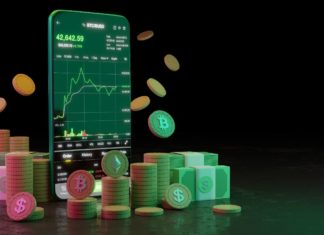 Crypto and Jingle Bells? Here’s How to Travel Using Bitcoin this...