On Friday, Bloomberg released a piece concerning American businessman Henry Kravis and his journey into cryptocurrency. The co-founder of global investment firm KKR & Co. is believed to have invested in a cryptocurrency fund offered by ParaFi Capital.

The news was released through ParaFi founder and CIO Ben Forman. Forman was a former KKR employee who left to start up the San Francisco-based digital asset company. According to Bloomberg, a spokeswoman for Kravis has refused to comment about the investment.

When asked about the company, Forman described ParaFi Capital as an investment firm focused on the blockchain ecosystem. The firm is also supported by Bain Capital Ventures, Dragonfly Capital Partners and other companies.

Forman who worked with MassINC, led KKR’s research project on blockchain and crypto before leaving the firm in 2018, Bloomberg reported.

When asked about leaving KKR, Forman was quoted saying: “While I toyed with the idea of pursuing blockchain investing within KKR, it was clear to me that the firm did not provide the optimal format to do so. Instead of pursuing crypto at KKR, I wanted to build the KKR of crypto.”

Based on Forbes rankings, Kravis has an estimated net worth of $5.8 billion. He is also ranked him as the 365th richest person in the world. 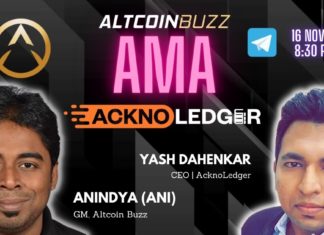 David Abel - November 18, 2021 0
AcknoLedger is working towards becoming an integral part of WEB 3.0 digital assets. They plan to do this by monetizing, mapping, and sharing Web...

Tether Is Only 74% Backed By USD

How To Provide Liquidity on RAMP DEFI Vaults and Earn RAMP...