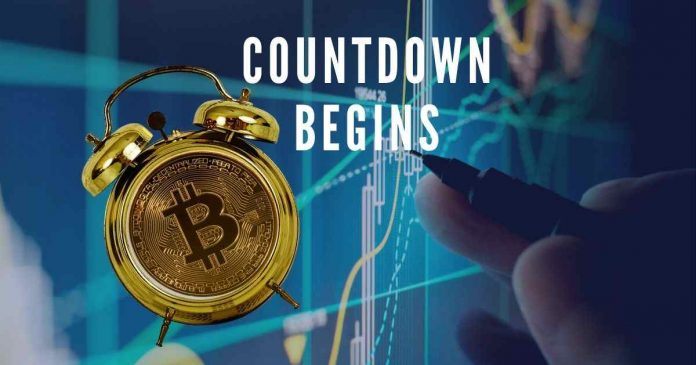 Finally, the quadrennial Bitcoin event is just nine days away! Yes, it’s the Bitcoin halving, what else it could be. Undoubtedly, there has been prodigious noise around halving in the last 365 days. And now for the next nine days, both BTC proponents and opponents will be sitting on the edge of the chair.

Have you boarded the Bitcoin halving hype train loaded with lofty predictions? Well, we did and we were left confused with so many predictions hovering around. After a lot of digging, we have uncovered the good, the bad, and the ugly of the most celebrated event of 2020.

Whom shall we trust the prime school economists or the elite market makers?

If we believe the economists, this is a good time to wash our hands off as each Bitcoin is currently priced at $8,789.70 (at the time of publishing). In case we believe the above-mentioned market makers then we must HODL. For once let us reason out things.

Why could this halving be bigger than the 1st and 2nd halving?

The COVID-19 inflicted economic collapse engulfed Bitcoin too and weak hands started believing that 3rd halving might fall flat. The fears started to take hold and the market crashed by 11.49% in March. Then something unusual happened, it recovered by 37.43% in the month of April. We must admit, Bitcoin resurfaced in a phenomenal way.

While this was pretty unique, it was equally scary as the traditional economies continue to collapse under the influence of COVID-19. According to the recent data shared by Skew, the Q2 of 2020 looks like it’s ready for halving bulls as it mirrors the 2016 halving pattern.

20/. 🟢Seasonality looks strong once again for Q2 as we approach the much discussed Bitcoin halving in a couple of days. pic.twitter.com/AilqW7tRPn

Sometime back we shared a Bitcoin and traditional market correlation chart in our weekly newsletter.

While in March 2020, the S&P and Bitcoin were showing strong correlation, Bitcoin has now decoupled. 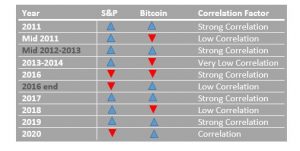 And we believe optimism around halving acted as the decoupling force. But there are more reasons that were not present at the time of 1st and 2nd halving. And they buttress the massive expected post-halving BTC pump.

Notice anything different in the last month?

Has #Bitcoin decoupled from the stock market?

The world’s strongest economy just witnessed record money printing. While this was important to stimulate the collapsing US economy, the accompanying debt injected by the $6.5 trillion dollar printing cannot be ignored. 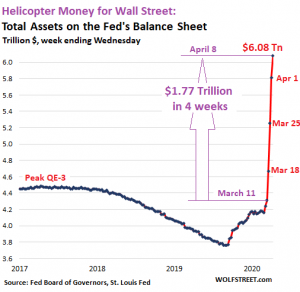 As soon as the dust settles, inflation, and pressure on dollar value will engulf the market. These unpredictable cycles of deflation and hyperinflation of the US dollar have shaken people’s trust in traditional economic models.

Henry Ford once said, “It is fortunate that the people of the nation do not understand our banking and monetary system, because if they understood it, I believe that there would be a revolution before tomorrow morning.”

We believe Ford and I think this revolution could mean more people wanting to own decentralized digital money like Bitcoin.

Bitcoin Halving interest higher than ever

The search volumes of “Bitcoin Halving” as of April 16th are 16% higher than the ones witnessed in 2016. And this continues to grow every passing day.

With an ROI of 23% in 2020, Bitcoin has by far the best performing asset compared to Gold and Equities. This is a potential Bitcoin awareness driving force. 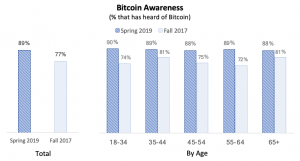 There is more that indicates that the Bitcoin interest is high. According to a graph shared by Jonny Lyu, the HODL culture has been growing for the last 2 years. The data by Glassnode reflects around 42.83% of the BTC in circulation has not been moved in the last two years. And this could possibly be because HOLDER’s are aware of a potential Bitcoin price boom.

Are you a HODLer or active trader?

Data shows that 42.83％ #BTC in circulation have not been moved in the last two years.

Do you think the strong HODL culture will bring a Slingshot Effect that leads BTC to a new peak?#BitcoinHalving pic.twitter.com/kMCeOy9V2u

It is quite possible that the retail buyers are just searching for “Bitcoin Halving” but are sitting on the fence and not buying.  But that’s not the case. According to two graphs prepared by Glassnode, the number of bitcoin addresses holding at least 1 BTC and at least 0.1 BTC is growing. And this is proof that the retailers are in accumulation mode. 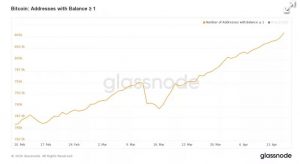 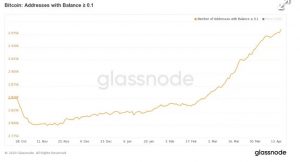 Meanwhile, the number of unique addresses holding at least 0.1 BTC also soared. And these touched a record high of 2,984,777.

The chart by CryptoQuant reveals that since January 2020, miners have been holding Bitcoin. And that is because they strongly believe that Bitcoin’s price is up for a massive post-halving pump. 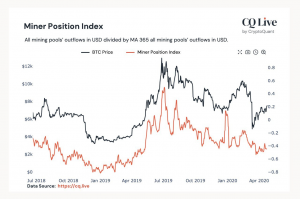 In the past, the miner’s profit when they create alternate influx and when the market is bullish. The miners create elevated promoting strain leading to a price pump. Here is the graph about the current scenario of miners holding or promoting Bitcoin.

It is evident from the buying selling volumes data shared by CryptoCompare that in 2020 the instances are 10 times higher than in 2018. In 2016, the complete everyday Bitcoin volumes on spot exchanges hardly exceeded $1 billion. But in March 2020, the top-ranking exchanges recorded some highest everyday spot quantity up to $21.6 billion. 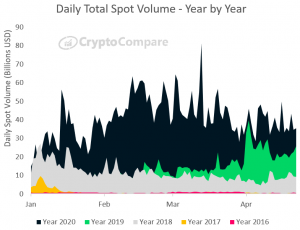 The Bad and the Ugly

Being optimistic about Bitcoin halving rally is pretty natural at this point in time. But we must not turn a blind eye towards the issues it could bring.

Before you go through the video. We have the listed the digestible information in the blog below

Bitcoin Halving 2020: worst congestion event ever on the horizon. PREPARE NOW. from CryptoCurrency

According to team BCH, with the block reward halving to 6.25, the network hash rate might witness a 50% decline. And that is because the outdated S9 Antminers that are majorly supporting the network will be forced to shut down as the mining difficulty grows post halving. For the miners to continue to operate at minimum profits, Bitcoin must double on 12th May. As this is quite a far-stretched possibility, we might be heading towards massive network congestion. 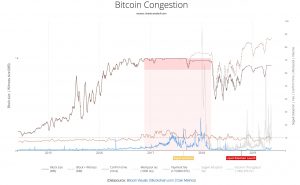 We have witnessed the same during 2016 Bitcoin halving too. See the pink zone in the graph below, this is the 2nd halving period when the blocks were 85% full.

It has been Satoshi’s words in a BitcoinTalk forum that as the Bitcoin mining rewards get smaller, the only way miners would earn is the transaction fees. In other words with 3rd mining, the fee bidding war will rage harder. The miners might prefer to process transactions where the transaction fees are higher and the low fee transactions might have to wait in queue for days, weeks, or who knows months.

Are we heading towards a network doom post halving?

Crypto analyst Willy Woo in 2018 took a closer look at the scalability of the Bitcoin Network. And his analysis awed the community. While the post-2016 halving Bitcoin network was congested at 85% full blocks, in 2018, the network was performing well in spite of 95% full blocks. Effectively, the fees and confirmation times remained normal. 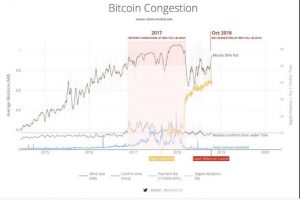 After so much of market analysis, we are optimistic about some gigantic price jumps in Bitcoin price. However, that might not happen with the snap of a finger on 12th May. It might take a couple of months for the network to cross the hurdles of network congestion. And once it overcomes the challenge as it did in the past, we are off to the moon.

Previously, we covered the Crypto.com halving special event that brings Crypto.com users bitcoin at 50% off on the 12th of May. 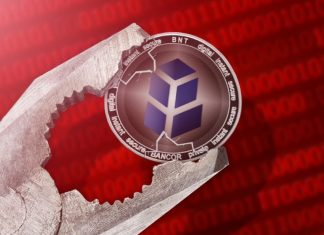 Ifeanyi - June 19, 2019 0
According to a post on Bancor's blog yesterday, Decentralized exchange Bancor, cited increased regulatory uncertainty as the cause of its decision to restrict US...