Chinese billionaire and experienced crypto trader, Zhao Dong, has stated that now is a good time to buy Bitcoin. According to Dong, it is best to buy the digital asset when “nobody cares”.

Bitcoin billionaire Zhao Dong said during an interview on WeChat, a Chinese multi-purpose messaging, social media and mobile payment app, that now is the time to buy bitcoin (BTC).

Zhao Dong shared his opinion in the WeChat group called ‘The Public Chain Alliance Crossing The Bulls And Bears Elite Team’. Dong’s statements feel encouraging and spread a message of hope amongst the Bitcoin community.

“For most people, if they don’t pay attention to Bitcoin now, they won’t pay much attention to most of the time, so for them, only how many tens of thousands of bitcoins will break them will be noticed again. If you and I believe in the future of Bitcoin, so it is best to hold as much as possible when nobody cares.”

Dong furthermore explained his rationale for investing, and he encourages to buy in a bear market:

“In the bull market, I don’t persuade people to buy Bitcoin, because it seems easy to make quick money but in fact it is not. Now [in the bear market], I start to talk people into buying Bitcoin.”

Dong also said that people should not be too optimistic nor too pessimistic. Companies and projects will always die, but at the same time a new wave of projects will arrive. According to Zhao Dong, 2019 is the time to invest because prices are currently low. The only thing you need is patience. 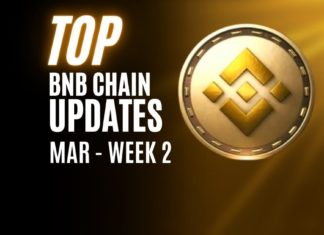 David Abel - March 14, 2022 0
Every week, there are updates and developments from the BNB Chain ecosystem. To keep readers informed, Altcoin Buzz covers some important updates from the second week...

Huobi US Shuts Down. Endured the Market for a Couple of...