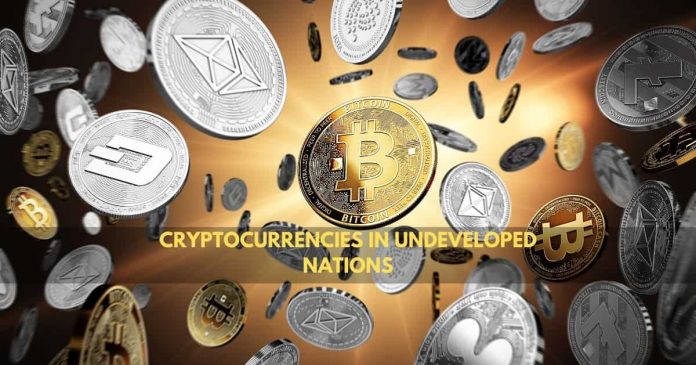 Blockchain project Onfo carried out research on the spread of cryptocurrencies in both undeveloped and developed regions of the world.

During the research held in April 2020, Onfo made use of four test areas namely The US, Germany, Russia, and Indonesia. With the US and Germany representing developed countries of the world and Russia and Indonesia as the developing countries as test subjects.

To carry out the research, Onfo sent out free cryptocurrency to 100 different people in each of the selected countries. Each individual got at least 10 cryptos each. They were then promised to get more crypto assets if they invited more users to try out the crypto. The result of the research showed that 100 people in the United States attracted 1,112 people. In Germany, 100 people attracted 763, Russia’s 100 brought in 2,304 new users. And lastly, Indonesia’s 100 brought in 4,350 new users. The findings, in essence, showed that cryptocurrencies spread about four times faster in Indonesia and Russia then it did in the United States and Germany.

Speaking on its findings, Onfo revealed that the spread index in Indonesia “turned out to be almost 4 times higher than in the US”. Seeing as both countries are quite identical in terms of population sizes. 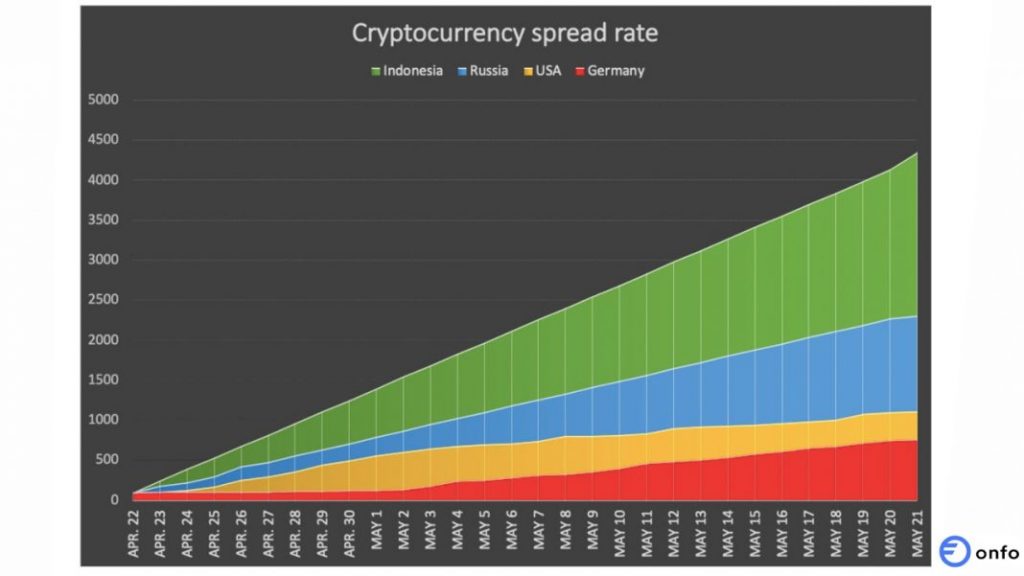 The graph above shows the Crypto spread rate in the four countries.

J.R. Forsyth, founder of Onfo pointed out that crypto spread in these countries might be due to the level of importance placed on small amounts of money in these countries. Further adding that Indonesia, in particular, showed great prospects for exponential growth in crypto usage and adoption. Forsyth also noted that this growth was facilitated by several important factors. Among which was the “absence of a national credit lending system”. Alongside important factors like increased smartphone usage, the current coronavirus epidemic. Indonesia is also the fourth most populous country in the world with about 80% of its entire population with no access to banking and other financial services. All these factors make Indonesia quite receptive to cryptocurrencies.

Crypto revolution is brewing in Southeast Asia and South Africa

According to Onfo findings, the US and Indonesia have similar population sizes. The research also disclosed that about 14% and 11% of crypto users exist in the United States and Indonesia respectively. However, the analysis further revealed that while crypto usage in Indonesia started about 1 – 2 years ago, Americans have been using cryptocurrencies as far back as 2008. The results, therefore, demonstrated “a rapidly expanding adoption level in Indonesia, meaning that the country can soon face its crypto renaissance”.

Indonesia isn’t the only region currently gearing up for a crypto revolution. Research has shown that Southeast Asia and South Africa are experiencing the same happenings. South Africa, according to reports from Luno and Arcane Research is already on the brink of a “crypto renaissance” period. The country has the highest number of crypto users in Africa at 13%. Closely followed by Nigeria at 11%.

Many schools of thought see cryptocurrency as the next big thing for Africa. Jack Dorsey, CEO of Twitter once described Africa as the future of Bitcoin. It would be a huge mistake to underrate worldwide crypto adoption especially in undeveloped regions of the world. First, billions of people live in underdeveloped regions of the world with a huge percentage of them unbanked and with no access to financial services. This alone is a strong point to adopt cryptocurrencies for most of them. In Mexico, for example, many families have resorted to making use of cryptocurrencies for cross-border transactions as they are easier, faster and cheaper.

Many crypto projects like Electroneum, Dash, Akoin are reaching out to underdeveloped regions of the world. With statistics showing a high amount of receptiveness to this fast-growing technology. Though the focus today is on underdeveloped nations, developed countries are however not left out of crypto adoption. According to research, many Chinese students see a future in the crypto space as inevitable, while other research disclosed that most US citizens are “crypto polygamous”. Simply put, they own more than one type of cryptocurrency. 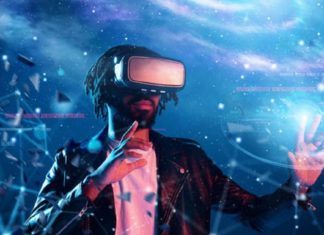 What Is a Metaverse – Part II

Ruma - October 31, 2021 2
In the previous part of this series, we discussed a few opportunities in the metaverse. In this part, we will continue with the remaining...