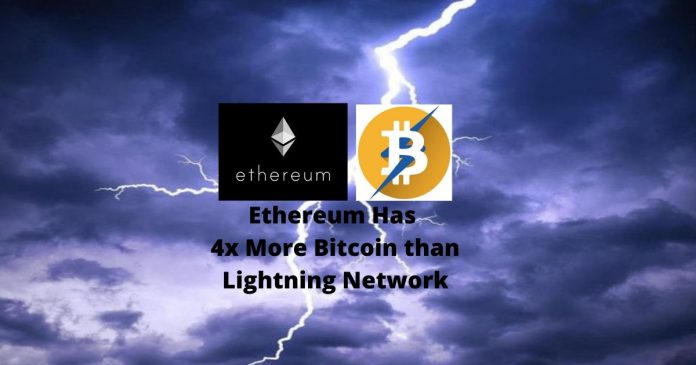 The total amount of Bitcoin currently in circulation on the Ethereum blockchain is four times higher than Bitcoin in the Lightning Network, a recent data revealed.

According to the report, tokenized Bitcoin (BTC) amount had multiplied by fourfold, from about 1,000 BTC to near 4,000. So, now the Ethereum (ETH) blockchain has significantly more BTC than the Lightning Network. Incidentally, Lightning Network, with its promotion as Bitcoin’s solution to scalability for years, only stores about 900 BTC.

To remind, Ethereum previously made a revolutionary move bringing BTC to the blockchain network in the form of ‘wrapped Bitcoin’ (wBTC). And after a short period, even the amount of wBTC on Ethereum has exceeded that of Bitcoin’s own Lightning Network. Recent reports suggest the value of wBTC on Ethereum stood at about $22 million compared to Lightning Network’s about $9 million.

Notably, wBTC is an ERC-20 token. It enables users to access popular ETH-based DeFi (decentralized finance) protocols using the value represented by their Bitcoin holdings. Undoubtedly, DeFi has been one of the biggest trends in the crypto industry.

While BitGo holds BTC of the clients, a group of ‘initial merchants’ act as middlemen between the users and the custodian. These initial merchants include Dharma, Kyber, Set Protocol, AirSwap, and Prycto, amongst others. Also, a decentralized autonomous organization comprising projects like Compound and MakerDAO operates the wBTC protocol.

Challenges of both Lightning Network and WBTC

While both platforms are doing their best to promote the use of digital currency, they have their own set of problems.

Notably, the biggest problem for Lightning Network is that for it the double-spending problem is still a stumbling block. As a result, it depends on intermediaries such as trusted ‘watchtowers’ or ‘liquidity providers.’ Moreover, there are some potential systemic issues. It is possible if all users tried to close their channels simultaneously that would create problems. This would arise if the Bitcoin network fails to handle the spike in demand.

On the other hand, wBTC faces possible challenges of potential hacks from external or internal rogue operators. Also, in theory, there is the possibility of a fractional reserve problem so far as WBTC is concerned.

Conclusively, it is important to note that both network provide ETH and BTC to clients. Invariably providing bitcoin for them as easy as having a bank in your pocket.

Previously, we did an article explaining the concept of Lightning Network and reported Lightning Labs receiving a major funding boost. Also, renBTC, the latest Bitcoin implementation on the Ethereum blockchain was finally launched last week. 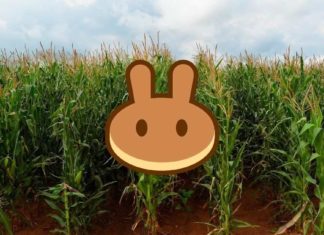 Is This 14% Deal the Best Liquidity Pool on PancakeSwap?