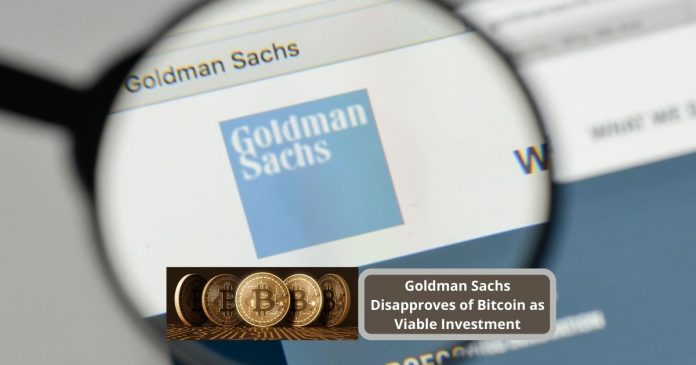 Goldman Sachs, a leading investment bank has said that they do not approve of Bitcoin as a viable investment.

Analysts from Goldman Sachs believe that cryptocurrency is not a durable investment for their clients. They presented their case during a client-facing call on May 27 and concluded that Bitcoin was not recommendable.

“We do not recommend Bitcoin”- Goldman Sachs

The Investment Strategy Group of Goldman Sachs represents the division in charge of wealth management for the investment firm. Their duty also involves managing and advising high net worth clients concerning the allocation of their assets.

It was during this event that the analysts expressed their disapproval concerning cryptocurrency. They took the stance that Bitcoin was not a durable investment, especially under the present economic development.

According to the bank analysis revealed in the slides of the event, “cryptocurrencies including Bitcoin are not appropriate as an asset class.” The deck also elaborated on the reasons for their claim, highlighting two key factors.

According to the deck, cryptocurrencies exhibited unstable correlations with other asset classes. Additionally, there was a lack of evidence that Bitcoin could indeed serve as an inflation hedge for investors.

The deck also stressed on the security issues that cryptocurrencies regularly face. It quoted, “we believe that security whose appreciation is primarily dependent on whether someone else is willing to pay a higher price for it is not a suitable investment for our clients.”

Disapproval of the intrusion of hedge fund into crypto

The Goldman Sachs analysts pointed out that some hedge fund investors were delving into the world of crypto. According to them, this would open crypto trading to other institutional investors.

During the call, the chief investment officer for wealth management at Goldman Sachs, Sharmin Mossavar-Rahman noted: “We also believe that while hedge funds may find trading cryptocurrencies appealing because of their high volatility, that allure does not constitute a viable investment rationale.”

It is pertinent to note that hedge fund heavyweight Paul Tudor Jones’s recently made a public investment in Bitcoin. However, the wealth management team of Goldman Sachs seems to disagree with this line of investment. The deck categorically states that: “We do not recommend Bitcoin on a strategic or tactical basis for clients’ investment portfolios even though its volatility might lend itself to momentum-oriented traders.”

Though Goldman Sachs may believe they are offering the best advice to their clients, Bitcoiners may not be happy with this development. Interestingly, David Solomon, CEO of Goldman Sachs had last year hinted at the possibility of launching its own cryptocurrency. 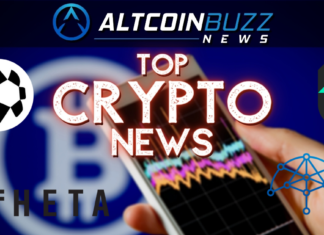 Piyush Tripathi - July 2, 2021 0
After making a daily high of $35,219, Bitcoin underwent a correction and is trading at $33,146. Meanwhile, the second-largest cryptocurrency, Ethereum, is looking strong...