Joseph Lubin, the co-founder of Ethereum, has made an interesting claim in regards to the future of Ethereum. According to Lubin, “Ethereum will expand by 1,000x in the next 2 years.”

While being a keynote speaker at South by SouthWest conference in Austin (Texas), Joseph Lubin made a significant statement about the growth of Ethereum. According to Lubin, who is also the founder of blockchain company Consensys, Ethereum 2.0 is coming and will let ETH expand a 1000 times.

“Ethereum 2.0 is coming…We have 8 teams building it and we are currently in Phase 0 of the four phases of the roadmap. We continue to build the base layer of the Layer 2 expansion solution, which will be in the next 18- At least 1000 times in 24 months. After that, Ethereum will continue to expand.”

Furthermore, Lubin also spoke about the early days of the Ethereum development and his view on the bear market:

“Since the start of the ecosystem and since 2009, we’ve seen many incredible rises in the price of these tokens followed by very significant corrections. So the most significant correction took us back one year, which was 5,000-times more valuable than when ETH was initially launched. In that context, it’s not so horrifying.”

The value of Ethereum has suffered quite a bit during the current crypto winter. At the time of writing, ETH is hovering around the $140,- mark, down from the all-time high of $1389,- in January last year.

Despite the huge decline in price, Lubin believes blockchain will have a big role to play in the global economy: 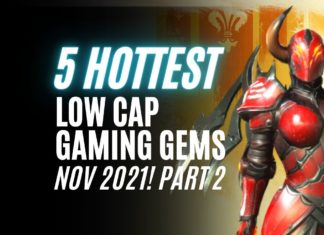 Victor - November 24, 2021 0
According to DapRaddar, Axie Infinity, DeFi Kingdoms, and Cryptomines have over USD 8 billion locked into smart contracts on their platforms. That is a...