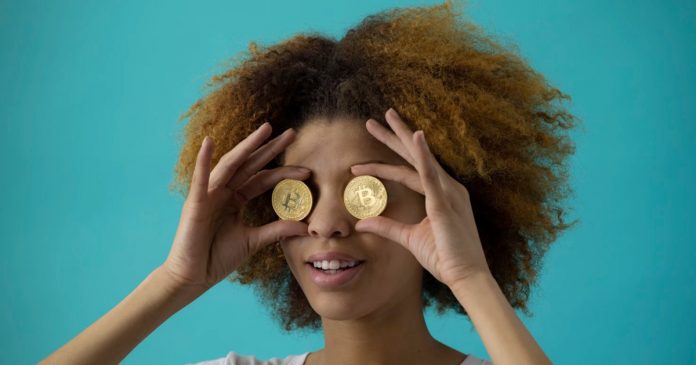 Good news for Bitcoin and other digital assets: Kroger, a major US retailer, has banned Visa credit cards at its chain of Smith’s food and drug stores because of excessive fees.

Bad news for Visa on Friday, as US retail giant Kroger announced that Visa credit cards will no longer be accepted at its chain of Smith’s food and drug stores. Smith’s chain currently operates 134 food and drug stores across 7 US states, employing 20,000 staff in total.

JUST IN: @kroger stores, including #Smiths will no longer accept VISA credit cards. The company says the change is due to "excessive transaction fees." #2NewsAM
MORE INFORMATION: https://t.co/JxJiv22BNQ pic.twitter.com/sHrO76mZv6

Mike Schlotman, Chief Financial Officer at Smith’s, commented on the news that the company is no longer accepting Visa credit cards:

“Visa has been misusing its position and charging retailers excessive fees for a long time. Card fees charged by Visa are higher at Smith’s than any other credit card brand!”

According to the announcement, consumers at those stores will no longer be able to use their Visa credit cards beginning April 3. For now, Customers using their Kroger Visa debit cards will not be impacted by the move.

As soon as the Kroger news came out, Anthony Pompliano tweeted that he wanted to get in touch with them to plan a meeting and talk about bitcoin and the Lightning Network.

Pompliano is well known in the cryptocurrency space. He is the Founder & Partner of Morgan Creek Digital Assets, and one of the world’s foremost bitcoin and open blockchain experts.

Grocery store @kroger is stopping acceptance of @Visa in over 250 stores because of network fees.

Who knows someone on the leadership team there?

The Morgan Creek Digital team will fly to meet them and get them hooked up with the Lightning Network nationwide. 🔥🙏🏽

A couple of hours later a product manager from Kroger Digital tweeted a response and set up a conversation: 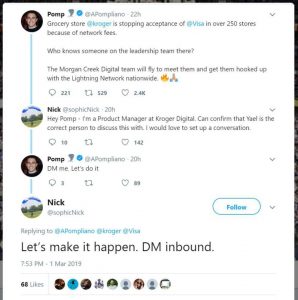 It will be interesting to hear if Pompliano and the executives from Kroger will actually have a meeting and what the outcome will be. If Kroger starts accepting Bitcoin then this will be a huge deal for the cryptocurrency space. 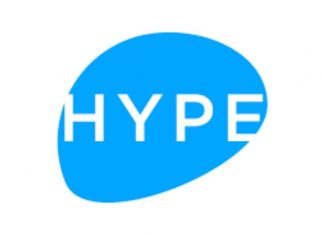 Mt.Gox’s Strategy to Reward Those Affected By Its Bankruptcy