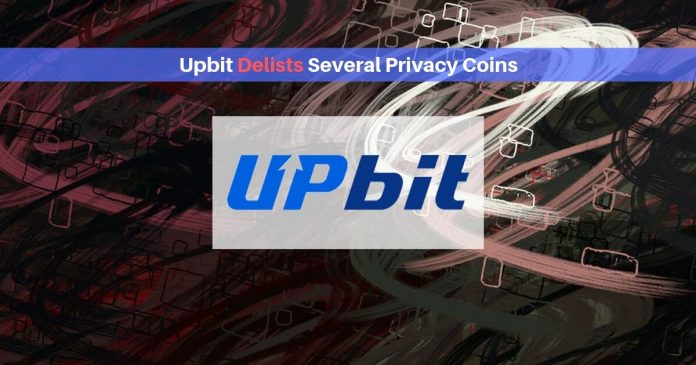 The cryptocurrency exchange Upbit has recently announced that it would be delisting six different cryptocurrencies including some privacy coins.

The exchange made this announcement in a notice on its website on September 20, 2019.  It revealed that the exchange will cease trading and receiving deposits of these coins from September 30. The cryptocurrencies that have to go include  Monero (XMR), DASH, ZCash (ZEC), Haven (XHV), BitTube (TUBE) and PIVX.

It seems like the exchange isn’t exactly entertaining the concept of privacy. What’s even more peculiar is that it has delisted DASH right after Coinbase has announced its addition.

Money laundering is on the agenda

Crypto exchange Upbit is definitely proactive when it comes to preventing money laundering. The exchange specified that this was the primary reason for the delisting.It is also trying to prevent vulnerabilities coming in from external networks. The exchange in the notice stated that:

“There are also crypto-assets that can selectively utilize anonymity features among projects that are subject to end of transaction support. […]Nevertheless, the decision to end trading support for the crypto-asset was also made to block the possibility of money laundering and inflow from external networks…” It further added that Upbit will continue to view digital assets that stand for “anonymity functions as candidates for designation of investment warning crypto-asset.”

Upbit isn’t the only exchange that is working to ensure maximum security on its platform. A few days ago, OKEx Korea, the South Korean arm of OKEx, delisted five altcoin due to international regulations. OKEx Korea announced it would no longer support Monero, Dash, Zcash, Horizen (ZEN) and Super Bitcoin (SBTC) as from October 10. The exchange gave the reason for this decision: the failure of these coins to meet up with FATF regulatory requirements.

The Financial Action Task Force (FATF) is an organization founded in 1989 by the G7 to create anti money laundering policies. Any country that does not adhere to FATF regulations will likely end up on a financial blacklist.

Over 200 countries are planning to implement these rules by June 2020. It is, however, a major concern that many decentralized blockchain may not be able to stick to these rules.

Find out more about the FATF here.

Luc Lammers - March 23, 2019 0
Changpeng Zhao, CEO of leading crypto exchange Binance, tweeted that banks will not be needed in the future to move funds. The tweet is...

The Ultimate Review of Top 4 Crypto Exchanges in 2022