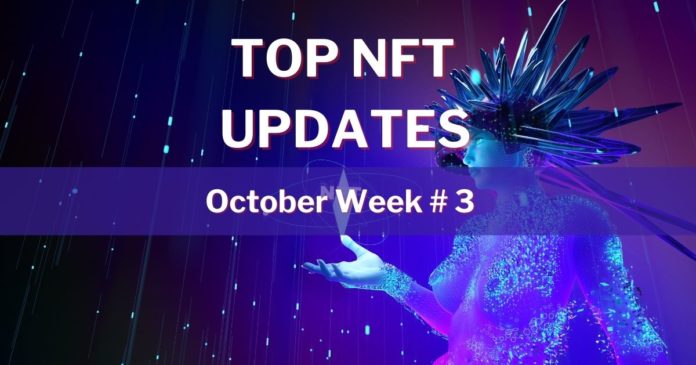 There are weekly NFT updates that you can’t afford to miss. Therefore, Altcoin Buzz has compiled the top NFT updates from the third week of October.

The non-fungible tokens (NFTs) space was exciting the previous week with a series of NFT updates. For example, last week, McDonald’s China revealed plans to reward employees and customers with NFTs. Also, a leading chess player was given an NFT trophy after winning a competition.

Let’s take a look at the other NFT updates from the third week of October:

1 – McDonald’s China to Give Away NFTs On 31st Anniversary

Last week, Chinese crypto lovers had a special giveaway alert as Mcdonald’s promised to giveaway 188 NFTs. The NFTs’ freebie is an exciting part of its upcoming 31st Anniversary.

This NFT collection is designed to suit the new three-way-structured headquarter of the company’s China branch. Also, the headquarter was opened along with the NFTs launching. Therefore, collectibles will be distributed to McDonald’s China lucky workers, as well as their customers.

Based on reports, reigning Chess grandmaster Magnus Carlsen was awarded an NFT trophy. Likewise, Carlsen has already won several international chess tournaments. However, the Meltwater Champions Chess Tour (MCCT) has made him earn an NFT award for the first time.

Wow! Check out the auction for the #TourFinals2021 #NFT trophy… LAST DAY. Get in there #nftcollectors .. the bidding war has begun #chesschamps https://t.co/eOipE9k2k7

On the other hand, in May 2021, MCCT’s allied with the FTX crypto exchange. As a result, the FTX Crypto Cup was launch. This partnership paved the way for him and other chess players to contend for a 2.1 Bitcoin prize fund.

Moreover, Carlson’s briefing mentioned the importance of NFTs: “NFTs help the chess community celebrate great moments and possibly also reward those that have already invested so much time in growing the game.”

The news made rounds about the famous crypto exchange, FTX’s massive latest involvement in the NFT world.

The US-regulated cryptocurrency exchange has expanded its business operation with the launch of FTX NFTs (the Marketplace).

The FTX controlled Marketplace will enable its US-based users to mint NFTs to hold and authenticate. Also, It will allow them to transfer or trade existing NFTs to the new platform. Therefore, the new NFT marketplace will give project creators full power over the NFT’s lifecycle. As a result, the NFT platform will guarantee creators the lowest fees of existing NFT marketplaces.

Besides, the FTX marketplace is built to support NFTs on the Solana blockchain in its early stage. But as time goes, the platform will make efforts to incorporate Ethereum NFTs. For instance, the new NFT marketplace will be available to only FTX US-based users.

According to reports, about 1.1 million people have already signed up for the Coinbase non-fungible token (NFT) ecosystem waitlist.

This comes after the Tuesday event, which saw the waitlist for Coinbase NFTs going live. Afterward, the result has led to over 1 million sign-ups. Notably, the Tuesday waitlist opening was effected through a blog post announcing its upcoming NFT platform, earmarked for launching later in the year.

In reaction to the massive figures on the waitlist, the company’s vice president Sanchan Saxena termed the numbers “insane.” He revealed the traffic generated during the sign-up for the waitlist temporarily broke the site.

Thanks for your patience everybody – for the last few hours, we have ramped up and scaled things for you to be able to sign up for the NFT marketplace.

ShapeShifts, a non-custodial cryptocurrency exchange, aims to produce the rarest collectibles in existence and some of the earliest NFTs in existence.

On the other hand, the ShapeShifts team destroyed several themed collectibles cards from the Spells of Genesis mobile game. However, they plan to give their decentralized autonomous organization (DAO) complete control of the cards left. Thus, making them available over two years.

Also, reports revealed that only 183 editions of the asset (also called SHAPESHIFTCD) are available in circulation. There are plans to transfer 32 NFTs to Ethereum via the Emblem Vault bridge. The team intends to maintain the 16 cards from the blockchain-based game to sell before 2022, remaining with its DAO.

The auction will last for one week. Watch the action starting tomorrow via the official ShapeShift OpenSea account: https://t.co/UqPVxKjuxe pic.twitter.com/XYt717iEeM 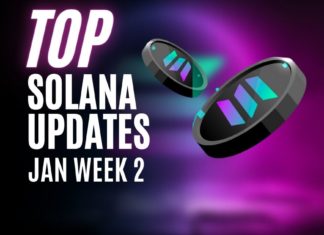 Daniel Abel - January 9, 2022 0
It was a bearish week for the crypto space as traders gave into the selling pressure, and tokens dropped significantly. Therefore, the $SOL price...

Price Levels To Keep An Eye On For These NFT Tokens:...