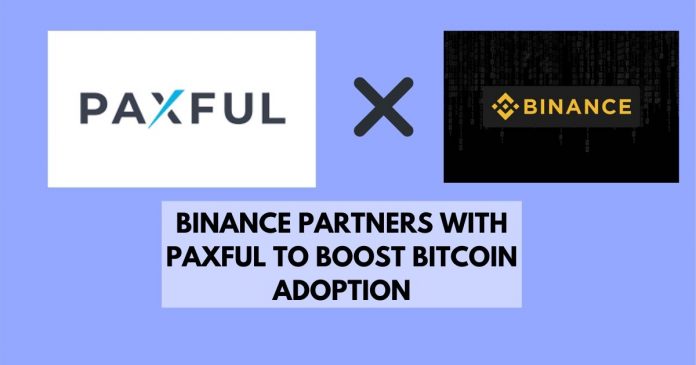 According to a press release, the partnership is expected to boost bitcoin adoption, bringing the cryptocurrency to the masses. Binance users via Paxful platform will be able to buy bitcoin with about 10 different fiat currency. Currencies like the Russian Ruble (RUB), the Vietnamese Dong (VND), the Indonesian Rupiah (IDR), the Nigerian Naira (NGN), etc

Alongside its recent inclusion of Paxful, Binance already has several other fiat gateway partners. They include Simplex, Paxos, TrustToken, Flutterwave, and AdvCash. These partners support bitcoin purchases with fiat on Binance. Binance’s partnership with Paxful stands out because the P2P platform already supports hundreds of payment methods.

COO of Paxful, Artur Schaback, pointed out that the partnership will provide financial services especially for the unbanked. Also adding that: “Unlike other payment gateways, Paxful supports more than 300 payment methods including local currency bank transfers, gift cards, and online wallets. […]This gives an opportunity for the unbanked and underbanked to be part of a new ecosystem.”

Using Nigeria as a case study, Schaback pointed out several restrictive rules guiding the Nigerian banking sector. With Paxful, Nigerians will be able to purchase bitcoin with gift cards to fund their Binance wallet.

Paxful claims to currently have 167 fiat currencies on its platform. While the partnership provides only 10 fiat currencies options, the two companies promise to add support for more fiat “in the near future”.

CEO of Binance, Changpeng Zhao (CZ), described the partnership as a  “significant” one. This is because it will open up cryptocurrency to a new set of users. Including “local currency bank transfers and some of the world’s most popular digital wallets.”

Paxful, however only supports bitcoin. This is because the platform believes that “there should only be one cryptocurrency to make the financial revolution happen.”

CEO of Paxful, Ray Youssef told reporters that, “Paxful is proud to be partnering with Binance”. Also adding that, “They share our passion and vision for the global crypto economy and we’re excited to see how this union will spur more financial access, for people everywhere.”

Looking out for the unbanked

According to reports, we currently have approximately 2 billion people with no access to banking services. A huge portion of these persons resides in developing countries. The new partnership with Paxful aims to bring cheap and accessible banking services to unbanked all over the world. Ultimately, it will bring Bitcoin to people in about 167 countries. And in the long-run improve the mass adoption of cryptocurrencies worldwide.

That said, just last month, Paxful recorded about $30 million in P2P bitcoin trades while over the last one year, the platform also added more than 800,000 wallets.

Luc Lammers - October 11, 2018 0
Blockvest was touted as a new decentralized exchange for crypto assets as well as a cryptocurrency index fund... but not anymore! Today, the news...

eToro adds Zcash to Its List of Tradeable Assets