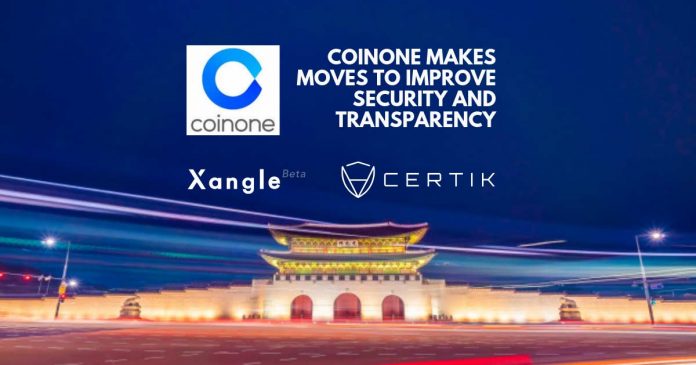 CoinOne, the number three South Korean crypto exchange, released an announcement that it will be working with Xangle and CertiK to improve security and enhance disclosure.

With the FTAF (Financial Action Task Force) guidelines beginning to impact and the concerns over money laundering raising, financial institutions are refining their KYC (Know Your Customer) rules, this move comes at the right time.

Korea’s Fair Trade Commission (FTC) in June called for a change of Terms and Conditions regarding the use of crypto exchanges after hacking and theft has been on the rise. The exchanges would require to accept the liability for any losses from the theft, according to the new T&C.

Xangle would be handling investor protection and project transparency for CoinOne while CertiK would deal with the security of the code, technology verification, and project information security. The announcement says that the purpose of signing the contract with CertiK is to prevent accidents such as exploitations of cryptocurrencies caused by a code security vulnerability, verify project technology at the code level and to specialize the screening process.

CertiK is a New York-based company which is active in South Korea. The company says that what they do is much more than a simple audit. It specializes in verifying blockchains and smart contracts where programs are mathematically tested and proven.

Xangle, on the other hand, is a Seoul-based cryptocurrency disclosure platform. It provides a ‘tear-sheet’ style summary of a token’s fundamental structure in both English and Korean languages. The summary includes the formal name, registered address, key people, pricing and major milestones.