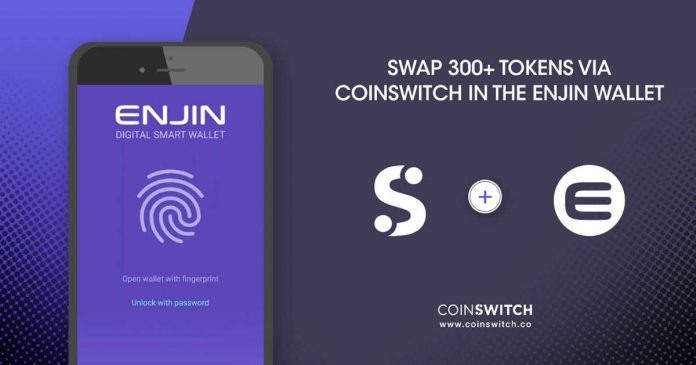 In the past three months, Enjin, the Singapore-based company focused on online gaming and the cryptocurrency sector, has struck multiple partnerships. The new one with CoinSwitch is no less promising.

In an exclusive press-release for Altcoinbuzz, the company revealed that it has partnered with CoinSwitch.co, a Sequoia Capital-backed cryptocurrency exchange. The two companies are planning to collaborate in three key areas. The first one concerns the integration of the CoinSwitch exchange platform into the Enjin Wallet.

They are also preparing for the launch of a custom-branded blockchain explorer for CoinSwitch platform users. Moreover, they are aiming to create an in-game payment gateway for Unity game engine.

Users will enjoy the partnership’s multiple advantages. For instance, they will be able to swap between more than 300 cryptocurrencies from 45,000+ possible trading pairs. For this, they will not need to log out of the secure interface.

Besides, the two companies have also launched a blockchain explorer. Powered by EnjinX, it allows using the CoinSwitch trading platform in real time seamlessly.

CoinSwitch also has great news for Unity gamers, as it wants to build an in-game cryptocurrency payment gateway. The latter will make it possible for Unity’s 4.5 million game developers to accept more than 300 cryptocurrencies from various platforms. These include big names like Xbox, PlayStation, Android, iOS, Windows, and Oculus Rift.

“At CoinSwitch, we believe that the gaming industry will play a crucial role in crypto mass adoption. Our partnership with Enjin, the leading player in this space, is an effective step that we are taking towards this,” said Sharan Nair, Senior Vice President at CoinSwitch.

CoinSwitch will automatically convert those cryptocurrencies into Enjin Coin (ENJ). The users will get the chance to create decentralized assets with the Enjin Platform and Blockchain SDK for Unity. For example, in-game currency, characters, weapons, and accessories.

“CoinSwitch is an extremely innovative company that has successfully created one of the industry’s most robust cryptocurrency trading platforms,” said Maxim Blagov, Enjin CEO. “We are working together to provide increased utility for all of the cryptocurrencies they support, meanwhile further streamlining the adoption process for the increasing numbers of developers jumping onto the Enjin Platform.”

To celebrate the partnership, the two companies are offering a two month grace period in which all trading fees will be waived on purchases of ENJ made via the CoinSwitch platform.

Previously, Enjin, which ranks 9th in terms of true volume, created a charity foundation with the SENS Research Foundation. Besides, the rumor has it that Google wants to integrate Enjin on their gaming platform.

Chris Perrotta - July 22, 2018 0
In “This was the NEWS” we take a look at the most important news of last week. What has happened in the crypto space...