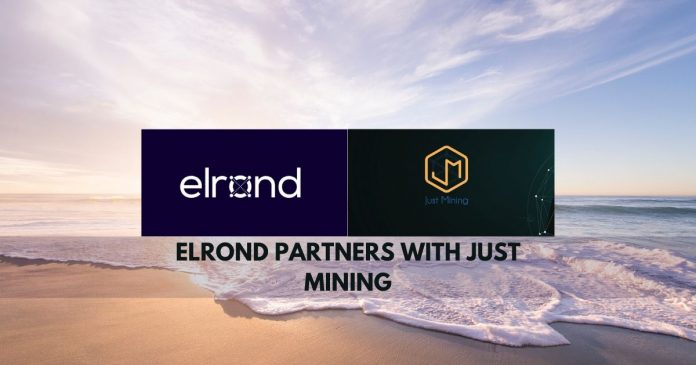 The french-based platform Just Mining will help run Elrond nodes while also assisting in its Genesis launch. Elrond disclosed that its entire team was excited by the strategic partnership. Adding that this partnership would open them to French communities around the globe.

Well-known for its history of working with decentralized technology platforms, Just Mining will provide Elrond with its rich and well-rounded expertise. While providing feedback, advice, and much-needed support during the POS platform Genesis launch.

Speaking on the initiative, CEO of Elrond, Beniamin Mincu disclosed his pleasure in the partnership. Adding that Just Mining will bring “experience in blockchain operations, excellence in services, and exposure for our protocol to a large existing customer base, at the same time.”

Founded in 2017 by popular french-speaking crypto activist Owen “Hasheur” Simonin, Just Mining has grown to be the foremost infrastructure operator in France. Since its inception, it has allegedly sold 3,500 mining machines globally. And has configured over 5,000 masternodes for its users, with claims to have maid turnovers of over €3 million.

Simonin in a statement pointed out that the company as a whole is passionate about the new internet. Hence its devotion to exploring “latest technologies emerging from the rapidly evolving blockchain space”. Adding that we would continue to support upcoming technologies aimed at making the most impact. Simonin further added that “we have found that Elrond has developed important technological innovations and is driven by an ethos we share. We are extremely excited about the opportunity to support it right from the start”.

Providing the blockchain platform with a fast, reliable, and secure consensus mechanism. The platform also alleges being able to process over 10,000 transactions in just one second.

Previously, we covered Elrond and ANKR strategic partnership. As well as a partnership with Binance to launch BUSD.

Ezekiel Ng - August 3, 2019 0
The blockchain gaming industry is rapidly growing, and with billions of dollars waiting to be grabbed each year. The interest generated in game development,...