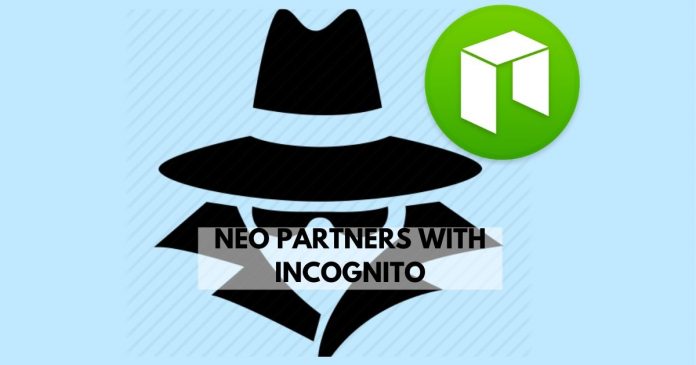 The partnership’s goal is to create private features for the NEO community. This is according to an official blog post by Incognito. With this partnership, Neo will provide its over 2 million users with much-needed privacy and non-traceability. It will be a “trustless privacy bridge.” Concurrently, it will enable senders to hide their balances, quantities, timestamps, recipients of transactions, etc

As adoption and awareness of blockchain technology grows, privacy has become a salient issue. More so, since governments and regulatory agencies are trying their best to eliminate the privacy feature of crypto and blockchain altogether.

Speaking on the partnership, Duy Huynh, project lead of Incognito, pointed out that: “We [Neo and Incognito] both agree that the biggest threat facing our increasingly tokenized world is a troubling lack of privacy—and we’re excited to tackle it together.”

NEO and Incognito are well-known names in the blockchain sector. Using their influence, they intend to build a Neo-Incognito bridge. One that will promote total privacy for both NEO and NEP5 transactions.

Speaking on the partnership, the Founder of NEO, Da Hongfei, noted: “Privacy and user security are crucial for the next-gen Internet, […] I am confident that this partnership will open up new and exciting possibilities for all.”

He added that working with incognito will provide the foundation for the next-generation Internet and “the smart economy of the future.”

According to Incognito’s whitepaper, the firm has created a POW network that functions with a sharded technique. A single beacon chain supervises huge numbers of shard chains. When combined, it produces parallel blocks. The platform uses the pBFT protocol for forming consensus on new blocks.

Incognito provides privacy and anonymity, using a data layer with “zero-knowledge proofs, ring signatures, stealth addresses, and confidential transactions.” Incognito also makes use of CryptoNote and Bulletproofs. Providing non-traceability with truncated proofs. It also requires no prior set up.

A read-only key can, however, provide audit access when necessary. Anyone with it will be able to view balances. This will enable regulatory compliance depending on users’ jurisdiction. Users will also be able to submit their balance to relevant authorities for taxation and regulatory purposes.

Neo recently partnered with Tomochain to build the neo ecosystem. In November, it also partnered with LEDGER to create Next Generation Internet (NGI).

Ruma - February 16, 2021 0
RAMP DEFI is an innovative project that aims to provide attractive benefits to its non-Ethereum users. User can deposit their tokens into the RAMP...