The recent bloodbath triggered by Elon Musk and an old China FUD drained billions of dollars from the crypto market, causing a huge price crash of all digital assets. Polkadot also suffered miserably and plummeted to $18.

However, the strong fundamentals of the network pushed its price close to the $30 mark. Moreover, Polkadot continues to bring new developments and upgrades to the platform to bulletproof itself against the volatility of the crypto space. The last week was full of such new updates, which we will cover in this blog post. Let’s see what is going on with the ‘blockchain of blockchains’ network.

Long-Awaited Parachains To Launch on Kusama

Parachains are individual Layer 1 blockchain that runs in parallel within the Kusama ecosystem. However, not any chain can join Kusama. A team must win a slot in the “parachain auction” to connect with the Kusama network.

Gavin Wood, the brains behind Polkadot and Kusama, shared in a Medium blog post that Polkadot has entered into a final – 5th – launch stage. Per the post, two important steps are to be taken before launching the parachains. First, the projects will undergo an external audit; the process has already started. At the same time, Kusama will commence the live test of parachains to experiment with its features. This “live-fire” test will involve one functional parachain and a successful auction of crowdloans.

Gavin also shared that Kusama is likely to go live in the coming days. Once everything goes as per plan for Kusama, the team will shortly roll out Polkadot.

Along With Parachains, Polkadot Will Introduce Crowdloans

Crowdloan provides users a new way to support and fund the parachain slots on Polkadot and its canary network, Kusama.

Anyone can create a decentralized crowdloan campaign to raise funds to bid for a parachain slot of their project. Users can participate in this campaign by depositing a preferred number of KSM or DOT tokens. KSM for raising funds for the parachain auction on Kusama and DOT for Polkadot.

In the same Medium post, Gavin Wood also shared that Kusama will soon be able to offer crowdloan functionality to users looking to participate in the parachain bidding auction. The aim is to test the viability of all Kusama’s features thoroughly before deploying them on the Polkadot network. Once the network is audited and tested, users will be able to deposit KSM to raise capital for the projects bidding for a parachain slot on the Kusama chain.

Users can reclaim their tokens if the campaign is not successful. If the fund-raising operation is successful, users can withdraw their tokens after the lease period ends.

Kusama is a Substrate-based blockchain, meaning it doesn’t support smart-contract functionality. Since we can not write logic into the Kusama network, we cannot create Non-Fungible Tokens (NFTs), polls, or develop decentralized on-chain applications. However, developers can put graffiti on the blocks of a chain, and design tools that can interpret graffiti.

RMRK is one such tool that dictates a set of rules on how to interpret blockchain graffiti in a way that users can simulate logic on a chain without using smart-contracts. Shortly, we will see new rules for interpreting digital artwork on Substrate-based networks like Kusama or Polkadot.

On May 12, the Kusama network shared with the network that the upgrade v0.9.1 passed the vote from the council, and is now a public referendum. In this upgrade, the Kusama team has included the code for parachains, slot auctions, and crowdloans.

This new update reduces the minimum vested transfer by 100x in addition to reducing fees or deposits by 50x. The goal is to transform the current Blockchain and decentralized finance (DeFi) landscape. Besides, this update could spur further explosive price growth for both KSM and DOT.

Kusama to Shortly Deploy the First Parachain After Approval

Following the v0.9.1 upgrade, Kusama will be able to allow for parachain deployment in Kusama. The network will deploy a Shell parachain, which connects to the Relay Chain and is responsible for producing blocks. This Shell parachain will serve no other purpose than being upgradable depending on the instructions from the central chain of Kusama.

Once this chain runs satisfactorily, the Kusama team will again vote to upgrade it to a “Statement Parachain,” which will allow the network to store fungible and non-fungible tokens. Additionally, users will be able to keep and transfer KSM and DOT tokens.

Polkadot is right on the track to bring a massive change to the blockchain industry with its sturdy solutions and constant updates. All these upgrades are proof that the platform is taking the necessary steps to grow its ecosystem. However, the success of Polkadot depends largely on the functioning capability of its canary network. In the coming week, we will see more news regarding the ongoing testing phase of the Kusama network. 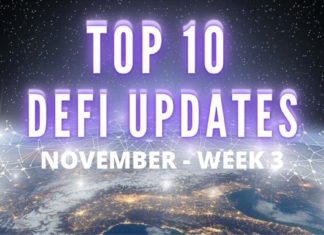 Racheal - November 23, 2021 0
The DeFi space has continued to grow exponentially with an increasing number of use cases daily. At Altcoin Buzz, we provide our readers with important...