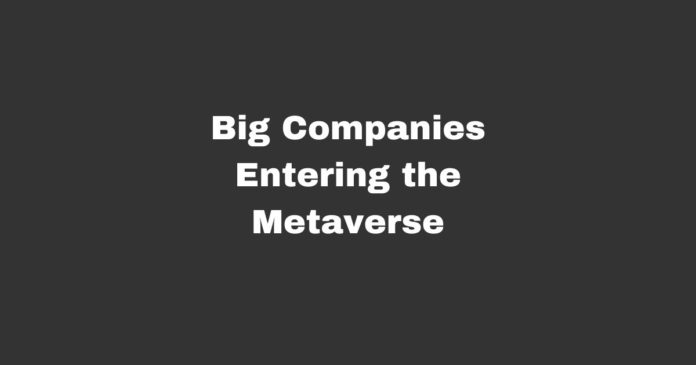 When Facebook changed its name to Meta, the industry was ready to realign its investments and support anybody who would create the future. In this article, you will find out which big companies are building Metaverse.

In October Facebook rebranded itself. It articulated a vision of the internet in which people may digitally communicate through virtual-reality avatars. The corporation is hiring engineers and buying numerous virtual reality game companies to develop its own metaverse. It will be a wide futuristic concept of shared virtual spaces that can be accessed via many devices. Zuckerberg believes that it will be the successor to the mobile internet.
In addition to Meta, other large companies are entering the world of Metaverse. Most of them are big technology companies. Apart from them, Metaverse is also attractive to retail, sports, and music companies.

The Sandbox, a leading decentralized gaming virtual world, has collaborated with Warner Music Group (WMG). Together, they will build the first music-themed environment in The Sandbox gaming metaverse. In fact, these immersive experiences will enable Warner Music artists to interact with their fans. Also, they will have access to Sandbox’s global community and will be able to create new revenue streams and forms of virtual entertainment.

Next, the Brooklyn Nets are the first professional sports club to provide a new and unique watching experience to their fans. Basketball fans can include a Live Stats display that is updated instantly when watching the game via the app. The Watch Party function is another tool designed to increase participation. Users may now invite their friends to connect using the app, and they can even communicate over video as if they were watching the game in the same room.

With digitization experiencing a parabolic rise, the selling of virtual products has seen dramatic growth. Retailers certainly intend to capitalize on the potential boom of the metaverse. As a result, lots of new retail titans were jumping on the metaverse train. For example,

Nike introduced metaverse ideas into their retail operations with the purchase of RTFKT. It is a fashion-focused virtual shoe startup. And now, Nike will be able to manufacture samples without spending the cost of producing physical samples of the sneaker. The virtual samples will allow the corporation to widely share the sneaker’s appearance. In fact, it will reduce the income statement’s selling costs.

Nike is heading to the metaverse.

On October 27th the company filed new trademark applications for NIKE, JUST DO IT and the swoosh logo.

The filings indicate an intent to make and sell NIKE-branded VIRTUAL shoes and clothing.#Nike #Metaverse pic.twitter.com/nisKVm2CTq

Puma has submitted trademarks indicating its plan to join the metaverse. For example, the mega-retailer intends to include virtual items in its catalog and will target both domestic and foreign clients.

Puma is the next company headed to the metaverse.

Per trademark filings made on January 11th, @PUMA indicates that it will start selling virtual goods such as clothing, footwear and sporting equipment.#metaverse #web3 #puma #OnlySeeGreat pic.twitter.com/bgtQuaHYOJ

With their new user-generated NFT initiative, Prada and Adidas are going deeper into the Metaverse. Above all, this initiative invites participants to make artwork inspired by their most recent collection, the Re-Nylon. Zach Lieberman will turn around 3,000 digital images into individual NFTs and combine them into a massive artwork.

Walmart looks to jump into the metaverse, with plans to launch its cryptocurrency and collection of non-fungible tokens or NFTs. Interestingly, the big-box retailer filed numerous new trademarks indicating its intention to produce and sell virtual items.

This is how Walmart envisions Shopping in the #Metaverse.

Also, Walmart has also registered trademarks for the terms “Verse to Home,” “Verse to Curb,” and “Verse to Store,”. In fact, that indicates that the company is working on a virtual shopping experience.

Samsung Electronics announced the “My House” world map service. It was launched in partnership with Naver’s 3D avatar platform Zepeto. Also, My House allows users to interact with Samsung home appliances and furniture in a customized virtual “house” that they may decorate to their taste. In fact, the metaverse platform was launched on January 5, 2022, during the annual technology expo CES 2022.

Thanks to Samsung's partnership with Asia’s biggest metaverse platform #ZEPETO, Samsung devices will be available for users to decorate their own 'home' in the metaverse. Read on to learn more about how users can experience Samsung products in new wayshttps://t.co/KI2HhQjpKY

Sony has partially unveiled the PlayStation VR2, the next version of its virtual reality headset. And the goal is to improve the user experience and show the company’s ambitions in the metaverse. The PlayStation VR2 will have a number of features. Above all, these features include:

Next, Apple has won a patent for an AR/VR headset that displays a virtual space where users may make dramatic entrances. Also, Apple’s patent document also includes hand-held mobile devices. It indicates that their concept of a Metaverse may include participants other than AR and VR.  In fact, it appears like the company is spending a significant amount of work to create a compelling solution.

Nvidia has announced that it would provide free licenses to creatives and artists for its Omniverse software. It is an open platform designed for collaborating virtually and working on physically realistic real-time simulations. Also, by opening up its platform and tools to individual producers, Nvidia can push innovation inside the metaverse. 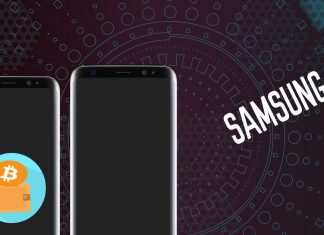 Robert Patrinjei - May 14, 2019 0
Samsung, the giant mobile manufacturer from South Korea, has announced crypto support to its budget phones. Not so long ago, the tech giant opened its...