Last month, CEO of Binance, Changpeng Zhao, announced that the firm was testing its own stablecoin.

“$BGBP which we are currently testing and will launch in the future is an effort to diversify the stablecoin assets offered in the ecosystem. In line with Binance’s mission, we would like to provide users with more freedom of choice.”

Zhou in an official statement on Friday, July, 19, stated that:

“There has been an overwhelming demand in the market and Binance community for more stablecoin diversification, including a GBP-pegged stablecoin and listing BGBP is in response to it.”

Zhou added that the increase in stablecoin usage was a major contributor to the firm’s decision to list the stablecoin. Binance isn’t stopping at listing only BGBP, it is putting plans in place to list other fiat-backed stablecoins in the nearest future. Binance coin (BNB) usage also increased as much as triple its volume since the beginning of the year. This rapid increase can be attributed to the advancement of Binance Chain.

Binance Jersey looking to issue its own asset

Binance Jersey was launched in January this year, its main focus is providing crypto-fiat trading services to traders in Europe. The platform currently lists nine digital currencies, namely Bitcoin, Bitcoin Cash, Litecoin, Ethereum, Binance Coin as well as others. All the digital assets on the platform are listed against the British pound and the Euro. Binance isn’t the only crypto exchange looking to launch its stablecoin, other exchanges like OKEx and Huobi also acknowledge the proliferating issuance of fiat-backed stablecoins.

This week also, Quantstamp, a blockchain security company, released the result of Binance GBP audit. The firm wrote that:

“The Quantstamp team is thorough and efficient when it comes to ensuring the security of ERC20 tokens, and we are appreciative of their audit of our first stablecoin, BGBP. As a dual issue token, BGBP is created on both Ethereum as an ERC20 token and on Binance Chain as a BEP2 token. We will eventually enable the two versions of BGBP to be converted freely and traded on Binance Jersey and Binance DEX.” 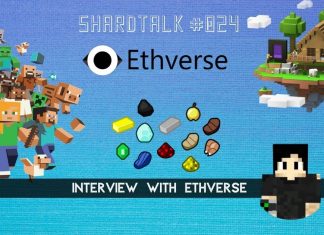 Ezekiel Ng - August 9, 2020 0
In this episode of ShardTalk, the team from Ethverse shared more insights on their game.  ShardTalk is the gaming interview segment that connects our readers...

Top 5 Crypto Gems On the Radar