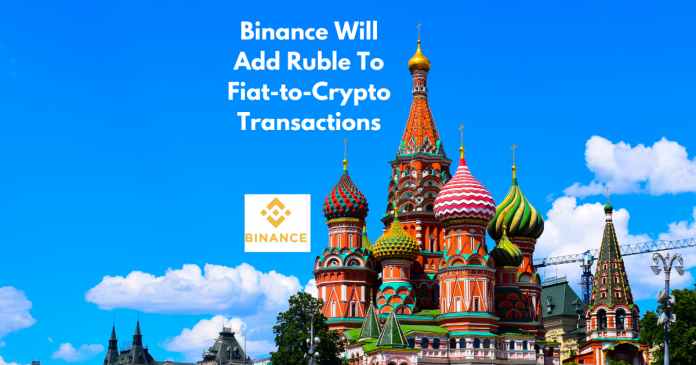 Binance is adding Russian currency to a fiat-to-crypto service through a third party.

Binance CEO Changpeng Zhao has announced that the platform is adding Ruble support. He made the statement at the Open Innovation Forum in Moscow.

The news provoked a mixed reaction. Some tweeters immediately disapproved of the plan, stating that there are currencies that deserve it “more.” Others are very enthusiastic, saying Russia has a huge potential.

Curiously, the media somewhat misinterpreted Changpeng Zhao’s words. Right after his speech, certain media outlets started to publish titles like “Putin is the most influential person in the Russian blockchain space.” However, Changpeng Zhao immediately refuted this information.

“A couple of bi-polar errors with this article. I said: “if you are engaged in crime, DON’T sign up with Binance.” The title line is a casual humor half-joke too. Maybe it was my bad pronunciation or speech, but journalists should have a good understanding before publishing,” CZ wrote.

A couple bi-polar errors with this article. I said: "if you are engaged in crime, DON'T sign up with Binance.”

The title line is a casual humor half-joke too.

Maybe it was my bad pronunciation or speech, but journalists should have a good understanding before publishing.

Earlier this year the platform launched an OTC service. It is a crypto-to-crypto over-the-counter (OTC) trading desk. And already in September the behemoth exchange announced it is going to integrate fiat currency gateways to this service. This approach will open access to cryptocurrencies for over 170 countries in the world.

The P2P service started on October 9 offering to trade against the Chinese Yuan. “Binance Launches P2P Trading, starting with China. Most of CT probably can’t use it yet, but 1.4 billion people can. We will expand the service to other regions soon.”

Most recently, its American arm Binance.US also started to insure USD Deposits. From now on the Federal Deposit Insurance Corporation oversees them.