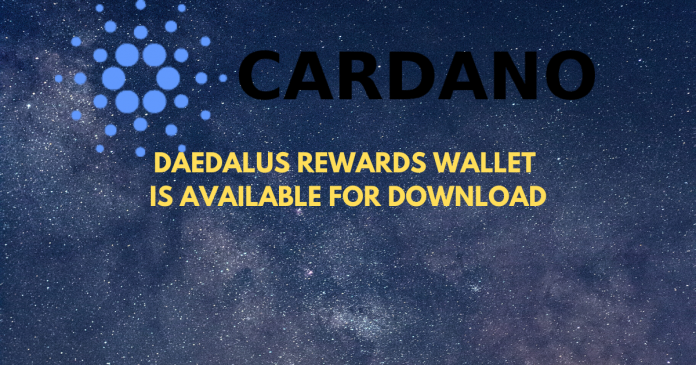 The Cardano blockchain project has launched the Daedalus Rewards wallet. It allows staking ADA tokens in the Shelley test network.

The developer of Cardano, IOHK announced the release of the Daedalus Rewards. In a tweet, the company wrote:

“Last week, we successfully spun up the Incentivized Testnet network and opened it up for stake pools to join and connect. It’s only been three days but we are thrilled to report that we already have over 300 established stake pools, ready for you to delegate to!”

The staking tool in the Shelley testnet started on December 13. This network differs from the main one. And users will be able to spend the ADA tokens earned in it after the end of the testing period. Currently, they can delegate their tokens to existing pools or act as pools themselves.

Since the launch of Shelley, more than 240 betting pools connected to the network, and on the first day of operation, about 120 betting pools were involved according to Cardano’s tweet. IOHK aims at reaching 1000 betting pools.

What is the reward?

According to the official reward calculator, users who delegate 100,000 ADA (circa $3,382) for staking can expect an annual return on their investment. The amount will equal approximately 7.17% or $242. The launch of the main Shelley network should take place in early 2020. From that moment onward users who have no test network tokens will be able to parttake in staking.

Thus, within 24 hours after the launch of the Cardano test network, ADA holders won over 5 billion ADA coins worth about $ 195 million.

Besides, the company is preparing for a big push soon. At least that’s what it has recently promised.

Do you own ADA? Are you a fan of Cardano? Let us know.

Racheal - March 12, 2020 0
The world-renowned video sharing platform, YouTube has once again been called out for deleting crypto-related content. Recently, crypto blogger Ivan on Tech took to...