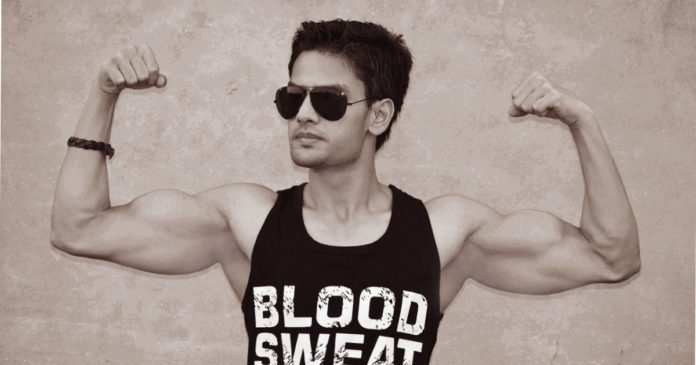 CoinGecko, the leading independent digital assets aggregator, has detailed the remarkable growth of the cryptocurrency market in its Q1 2021 report. The report reveals that Binance Coin (BNB) had the best performance with a 710% gain in the first quarter.

CoinGecko, in its Q1 2021 report, offers major insights into the growth of non-fungible tokens (NFTs), the decentralized finance (DeFi) space, and the cryptocurrency market from the past quarter.

According to the report, Binance Coin (BNB) ended Q1 with the most growth (710% gain), closely followed by Cardano (ADA) and Polkadot (DOT) with 555% and 295% growth, respectively. This growth outperformed Bitcoin (BTC) and Ethereum (ETH).

The report acknowledged the dominance of altcoins in Q1. However, it pointed out that Bitcoin remains the largest digital asset, owning 57% of the entire cryptocurrency market cap. The crypto market cap rose by 146%, successfully hitting over $2 trillion. 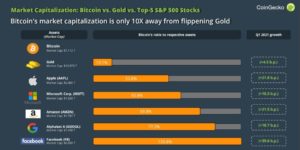 Additionally, the crypto aggregator platform noted that the immense growth recorded in the crypto space can be attributed largely to the recent adoption of Bitcoin by global financial institutions including Tesla, Visa, PayPal, Grayscale, and others.

The report also revealed that stablecoins in the first quarter of the year were used as a medium of exchange more than BTC and ETH. CoinGecko added that BUSD and UST had the highest velocity in Q1, rising by over 250% and 800%, respectively.

NFTs Have Become the Gateway Drug to Crypto

In their Founders’ Note, CoinGecko CEO TM Lee and COO Bobby Ong stated that the new craze surrounding NFTs is also a significant reason in raising awareness as well as influencing the growth and adoption of cryptocurrencies.

The two men state that “NFTs have become the gateway drug to crypto,” noting that NFTs can massively increase the adoption of cryptocurrency due to their innate ability to create digital collectibles.

CoinGecko revealed that the total NFT art trading volume saw a 1,281x growth compared to a year earlier. Also, Google search interest levels for NFT hit an all-time high of 100 in March. The search ratio for NFT, which was 8x behind DeFi at the start of 2021, surpassed DeFi at the beginning of March. At the end of March, there were four times more searches for NFT than there were for DeFi. 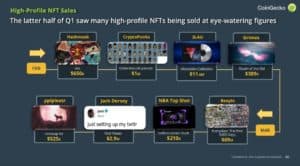 The report further revealed that the NFT market cap, which topped $27.9 billion as of April 1st, 2021, was as a result of four major NFT project categories, which includes:

The data platform further revealed that the DeFi space recorded massive growth with its market cap hitting a new all-time high of $95.7 billion in the first quarter. It also disclosed that DEXes dominate half of the DeFi ecosystem. The report added that Uniswap, Sushiswap, and PancakeSwap contributed significantly to the 50% growth in the total market cap of DEXes in Q1.

The report also disclosed that DeFi tokens recorded a positive return in the first quarter. Notably, out of the top 5 DeFi tokens, LUNA experienced the highest growth in Q1, recording a 2,761% increase over the 3-month period. LUNA was followed by UNI with 442% growth, AAVE with a 332% increase, LINK with 159% growth, and SNX with a 149% increase.

Find out more about the NFT space and other DeFi updates on the Altcoin Buzz YouTube channel.

Manoj Sharma - May 24, 2021 0
The recent bloodbath triggered by Elon Musk and an old China FUD drained billions of dollars from the crypto market, causing a huge price...