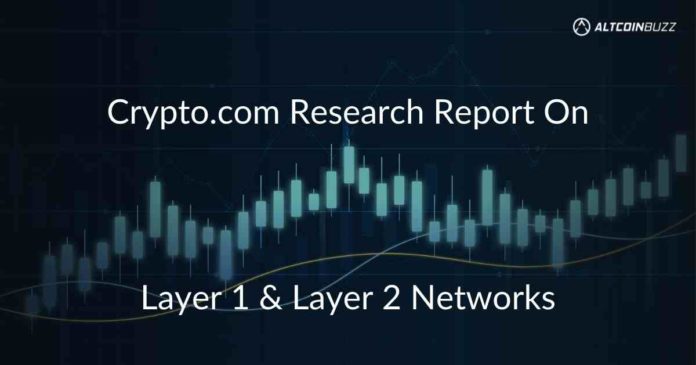 Many crypto enthusiasts considered 2021 to be the biggest year of their careers. Several interesting things happened during the course of the year. For example, the crypto world gained more mainstream attention during the year. Several concepts, such as DeFi, NFT, and P2E gaming, all gained popularity in 2021. And that means growth in Layer 1 and Layer 2 networks.

Crypto traders and lovers anticipated that the market would mirror similar success in 2022 as it did in 2021. However, the reverse was the case. Bitcoin, widely held as the industry’s giant, continued to decline since the year began. Other tokens have fluctuated as the market struggles with internal and external concerns such as the SEC. Crypto.com, an exchange platform, released its monthly analysis of the market in April.

We have covered other key market areas such as NFT, Derivatives, etc., but this piece would solely focus on trends and patterns affecting Layer-1 and Layer-2 chains in April. A Layer-1 network is a blockchain in the decentralized ecosystem and its underlying infrastructure. So, Layer-1 blockchains can finalize and validate transactions without needing another network. Then, a Layer-2 protocol is a third-party integration. It runs on top of a blockchain protocol to help it scale and be more efficient.

TVL on All Blockchains

According to Crypto.com, the total value locked on all blockchains was relatively stable in April despite the state of the market. The total value locked is an important yardstick in measuring a blockchain’s performance. It represents the number of assets currently staked in a specific protocol. However, this value does not refer to the number of outstanding loans. Instead, it mirrors the total amount of underlying supply that is fully secured by a particular DeFi application.

Platforms such as Polygon, Tron, and Cronos had all fluctuated in the previous months. But like the rest of the blockchains, April came with some level of stability. At the end of April, Ethereum’s TVL was slightly above 100 billion. Blockchains such as BSC, Avalanche, Terra, and Fantom managed to weather the storm in April. 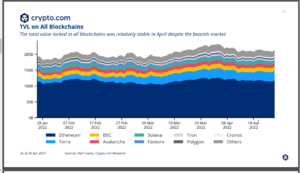 Another platform that has had a notable year is Near Protocol. According to Crypto.com, Near has more than quadrupled since late January. As of January, Near was barely above the 100 million mark, but in April, Near surpassed the 400 million mark and almost approached 500 million. 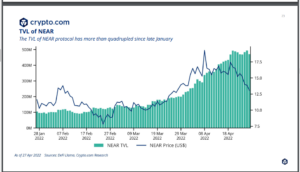 Crypto.com also highlighted some Layer one and Layer two chains with TVL of more than $10B. As of this report, Terra had one of the best runs in the market. The platform’s TVL rose all through April, reaching $21B as of April 27, 2022. However, we know what’s going on there now with the huge UST depeg and the huge drop in both UST and LUNA. 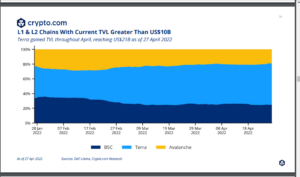 January to late February were good months for Avalanche in terms of its TVL. However, things went a little slower for Avalanche in the weeks that followed. Nonetheless, its TVL exceeded $10B. Like Avalanche, BSC also enjoyed a flying start to the year. But things appear to slow down from March. But as of the report, it had a TVL greater than $10B

Waves stood out among L1 and L2 chains with TVL between $1B and $10B as of April. The platform didn’t start the year the way it had hoped for. However, Waves witnessed a spike in its TVL in early April. Nonetheless, this spike was short-lived as the platform subsequently declined. 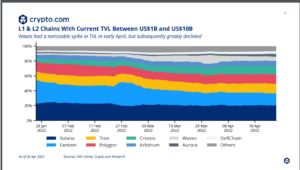 Fantom’s TVL at the start of the year was noteworthy. Things looked brighter by late February. But by the start of March, it had begun to go through a decline, which continued until April. Here are other L1 and L2 chains whose TVL ranked between $1B and $10B as of April 2022:

Crypto.com listed L1 and L2 chains with a TVL of less than $1B as of its April report too. Parallel witnessed remarkable progress. It has experienced an 18% surge in TVL over the last 30 days. According to the report, it eclipsed $800 million on April 21, 2022. Furthermore, the Layer 1 network, Elrond’s TVL, was on the increase at the end of February. However, the platform saw a decline by April. 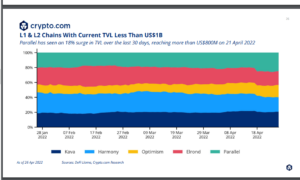 Other layer one and layer two blockchains with less than $1B include:

In conclusion, the report shows that different chains had different outcomes within the last few months. For some, L1 and L2, April was a pickup moment. It is safe to say that April was a stable month for most chains. 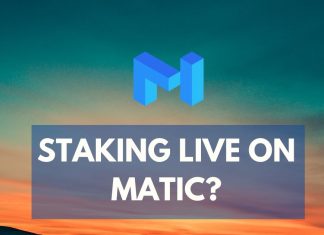 Ezekiel Ng - June 19, 2020 0
Staking on Matic's Mainnet is going live by June 29. Community members who registered for Matic's Staking Education Initiative can get a first-hand experience...