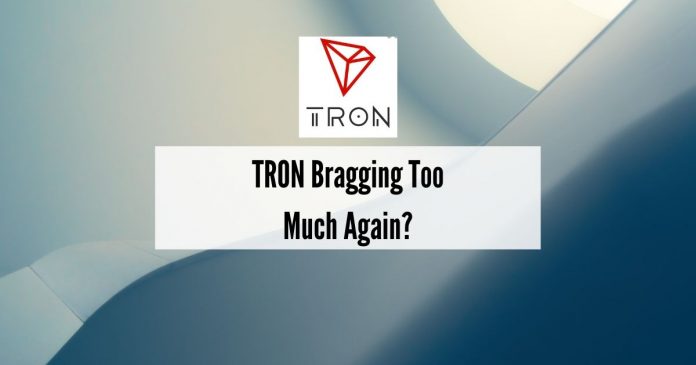 TRON dApp ecosystem count surpassed EOS, as per the DAppReview’s last week report last. And once again TRON Foundation is bragging about its achievements.

In the last week, TRON added 7 new dApps. With that, its total dApp count reached 680. That indeed places it above EOS but it seems the latter is way ahead in terms of quality.

Read on to understand why we think so.

#TRON is now the second most used DLT protocol for the development of decentralized applications (#DApp), after Vitalik Buterin’s #ETHEREUM, according to the @dapp_com 2019 Annual dApp Market Report. #TRXhttps://t.co/dAEdA9ThFu

In 2019, Ethereum, TRON, and EOS remained among the top dApp platforms. In total, these three public blockchains contributed 98.65% of the total transaction volumes for dApps. Looking at the chart by Dapp.review, Ethereum remained the top contributor. 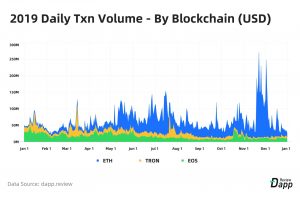 In the last quarter of 2019, the popularity of ETH dApps spiked but TRON dApps failed to gain user attention. In fact, the traction continued to decline. By the end of 2019, the total transaction amounts on ETH reached 12.8 billion USD while EOS and TRON hovered around 6.1 and 4.4 billion USD respectively. Notably, EOS’s contribution exceeded TRON’s in spite of some of its dApps migrating to WAX.

There are more reasons that make us believe that TRON’s win party might be short-lived.

DApp ecosystem is a clear indicator of how close a blockchain platform is to mass adoption. According to DAppreview.com Decentralized Finance (DeFi), non-fungible tokens (NFT) and blockchain games happened to be the most innovative genres. And gaming is where maximum user traction was noticed.

Here is another reason

TRX dApp ecosystem’s prime focus remained Casino dApps. And that might be another reason for the decline in daily volume transactions. 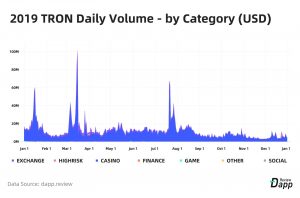 Both DappRadar and Dappreview track over 2,900 dApps in the blockchain ecosystem.

According to DappRadar’s “10 Dapps to try in 2020,” ETH and EOS dApps out beat TRX dApps in popularity. Some dApps exist on multiple platforms, too. Expectedly, 6 out of 10 Dapps are built on Ethereum. On the other hand, 3 are built on EOS and 3 are on TRX. We took a closer look at dApp Newdex that exists both on EOS and TRON. And here is the comparison:

We don’t contest the fact that EOS’s followership took a hit last year. But when talking about dApp space, EOS is ahead of TRX. And the lead TRON is celebrating might be temporary.

Previously, we covered how TRON CEO Justin Sun was creating hype about a lunch with Apple’s co-founder Steve Wozniak. 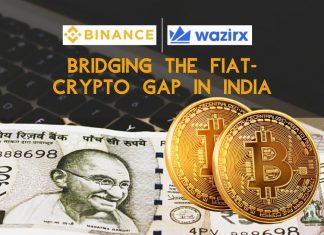 Deepika Garg - November 21, 2019 0
India’s cryptocurrency industry is still in the throes of uncertainty. However, today’s announcement from Binance is promising. The exchange has acquired WazirX, one of...

Top Things You Should Know About Yearn Finance (YFI)