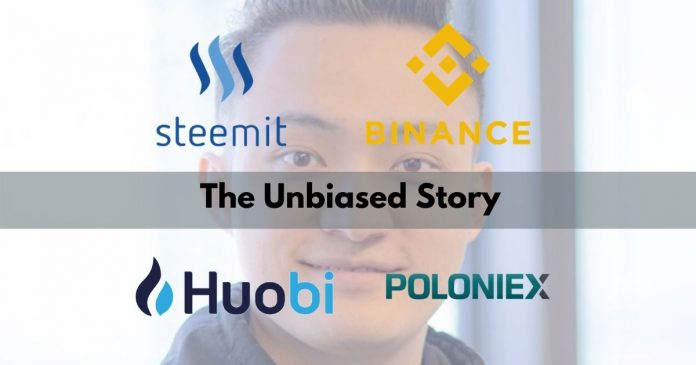 Many have been directing their anger towards TRON Founder, Justin Sun and his recent bold moves on Steem. However, can that be justified? Or is everything just a show of brute strength when things don’t seem to go his way? Here is the whole episode uncovered.

Steem is a social blockchain that grows communities and makes immediate revenue streams possible for users by rewarding them for sharing content. Steem is a delegated proof of stake (DPoS) blockchain, similar to EOS and has a top 20 consensus witnesses which mainly run it. When they agree on the code, they run the new hard fork and that’s how the chain keeps going forward. Steem has about 445 dApps and is one of the better-reputed blockchains to develop on.

The Tron Foundation announced that they are planning to migrate Steemit’s products and users onto the Tron network. They will eventually swap out Steem for a Tron based Steem token. Justin Sun, CEO of Tron, had then acquired Steemit Inc for an undisclosed sum of money.

This acquisition had granted Justin access to a large amount of pre-mined coins. What the previous owners of Steemit Inc and the consensus witnesses had agreed on was that the pre-mined tokens will only be used to help fund community development and not to use that stake to vote for witnesses and content.

The consensus witnesses felt threatened by Justin’s newfound power and executed a soft fork. The effect of this fork was to freeze Steemit’s tokens (73 Million Steem = $16million) to prevent Justin from using them in any way he wants. This move came days after Justin’s acquisition of Steemit Inc.

On 24 February, there was an update release that there will be a town hall meeting held between the witnesses and Justin a week later. If Justin says what the witnesses like then, they will return Justin’s Steem to him.

Because of this hostility, this situation can be seen similar to a terrorist act due to his Steem being held ransom. Justin then got various centralized exchanges such as Binance, Huobi, and Poloniex to use the Steem Tokens stored there. This resulted in Justin having enough proxy power now to vote new top 20 witnesses and also hard fork the blockchain. All this happened while the meeting with the original witnesses was still being set up

Many had strong reactions to this whole episode and Justin Sun‘s misuse of power. However, we need to take into consideration that it doesn’t make sense for Justin Sun to run the Steem blockchain if there is a lack of trust and complete decentralization.

Adding on, is this really a misuse of power or is it just a move in self-defense? After all, it makes perfect sense to try to get back what was unrightfully taken away.

There has been a lot of unrest within the top 20 witnesses for them to carry out this bold move. They have developed many amazing Dapps and done a lot of wonderful things on the Steem blockchain. Steem had been peacefully and smoothly running with a lot of support from the community as well. The strong reaction from the witnesses can be seen as a countermeasure. Just like when a pack is threatened the leaders step up to exterminate the threat. But, are they really acting in the best interest of their community?

Several exchanges had joined forces with Justin to overpower the witnesses. However, the usage of funds that isn’t theirs is highly questionable. They shouldn’t have the power to use your funds for voting and other purposes. Moreover, it isn’t directly their business to mingle with blockchain consensus as well. Should exchanges be allowed to do that?

What can we learn from this?

There are many takeaways from this incident and we should look at it from many perspectives.

On a blockchain like Steem which follows DPoS, there is a lot of power riding on the top witnesses. As we can see clearly, the witnesses could easily take control and prevent people from using their funds. Witnesses are supposedly there to have the best interest for the community. If the witnesses start to sway and make moves for their own interest instead, who will be there to stop them?

In Justin’s case, if your company is threatened will you in your power do something to solve it? Justin’s answer to the situation does bring up many questions but is it really wrong on his part?

However, for the exchanges that helped him, are they really allowed to handle their customer’s funds in the way they did? This brings us to this phrase ‘not your keys, not your wallet’ which perfectly summarises it. This incident has shown clearly that exchanges can use your funds for their own purposes. That is why you shouldn’t store your crypto in exchanges for long. Here is another video we made last week talking about other possible problems with centralized exchanges.

Justin has summarised the whole incident on his twitter and released an open letter. He plans to return governance back to the community once this incident is over. The Steem blockchain will not be abandoned or merged to TRON unless the community decides so.

The ball is in the hands of the witnesses now. What they decide to do next will tell a lot about their interest in the community and Steem.

More on this topic

Everything You Need To Know About the Adventure Token and the...

Ruma - January 27, 2021 0
Liquidity mining and yield farming has been in the crypto space for quite some time and has received good user adoption. Uniswap is one...