Undoubtedly, Linear Finance poses stiff competition to the Synthetix project. This is because it is trying to address the pain points like transaction costs, transaction speeds, cross-chain compatibility, and more. Interoperability is a key distinction for Linear as the other chains can help facilitate high-speed and low-cost transactions with higher liquidity.

As the Ethereum prices continue to soar, DeFi protocols like Linear suffer due to increased transaction costs. Effectively, the users end up bearing the heat of soaring gas fees. To offer a solution to the same, Linear Finance began integrating Binance Smart Chain (BSC) as a layer-two solution. On 15 January 2021, the team launched Linear.Builder Mainnet v2.0. This comes with full BSC functionality and swap functionality. Moreover, BSC is the first EVM compatible blockchain that has been integrated with Linear.

What is Linear.Builder Mainnet v2.0?

Linear Mainnet Buildr v1.0 went live in December 2020 and is part of the decentralized application suite. Moreover, it is used to build ℓUSD by staking LINA. Basically, ℓUSD is the base currency of the Linear Exchange and is used to purchase synthetic assets on the Linear Exchange. Interestingly, the first version of Buildr functioned on the Ethereum network, and users were suffering due to high transaction fees. Here comes Buildr v2.0.

However, the Linear Mainnet Buildr v2.0 that launched on January 15, 2021, will function on Binance Smart Chain. Effectively, all the user’s LINA assets have been migrated from ETH Buildr v1.0 to the new BSC Mainnet Buildr v2.0. All the staked and locked LINA were successfully migrated to BSC.

Buildr Migration Success: All user staked and locked $LINA tokens have been migrated successfully to the #BSC Mainnet. This marks the last step before we launch the #LinearExchange which will also be secured by @BandProtocol oracles. Stay tuned!!#LinearBuildr #BSC $LINA $BAND pic.twitter.com/9x7tVagD2X

As the Buildr is now functioning on the BSC, the users need to add BSC Mainnet to MetaMask manually. Along with that, they must maintain some BNB tokens in the MetaMask to interact with Buildr v2.0. Furthermore, Buildr v2.0 comes with a built-in swap functionality. We will discuss the swap functionality later in the article.

Binance Smart Chain, or BSC, offers an innovative consensus mechanism known as Proof of Staked Authority (PoSA). Impressively, the consensus supports short block times of almost three seconds. Furthermore, the transaction fee is as low as one-tenth of that on the Ethereum network. Along with that, BSC offers higher security for the transactions. Thus, the full BSC functionality Buildr v2.0 supports faster, cheaper, and more secure synthetic asset transactions.

Additionally, BSC is EVM compatible and maintains the same user experience for Buildr v2.0 users. This ensures that Buildr v2.0 can be used without any learning curve.
With the completion of migration to BSC, Linear users can now enjoy faster and substantially cheaper staking/unstaking LINA, ℓUSD build, ℓUSD burn, and claiming rewards. Additionally, the team has maintained cross-chain compatibility with the Ethereum chain using the swap functionality.

The users can excess the Linear swap functionality within the Buildr v2.0 app under the swap tab. Furthermore, they can swap LINA, ℓUSD, and Liquids between Ethereum and BSC. However, the users need to have both ETH and BNB (BEP-20) to pay the swap transaction fees on both chains.

Swap That Works for Stake and Build Too

The swap functionality has been integrated into the stake and build feature of the Buildr. Thus, if a user comes with a LINA (ERC-20) to the Buildr, the protocol will automatically swap it to LINA (BEP-20) and stake it. Effectively, the ℓUSD will be built on Binance Smart Chain without any manual swaps.

Here is why we believe LINA is a real altcoin gem. For more crypto updates, do subscribe to the Altcoin Buzz YouTube channel. 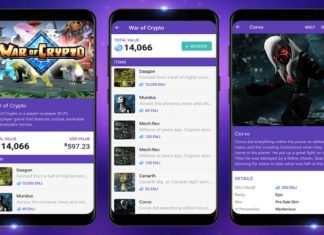 Luc Lammers - January 30, 2019 0
Enjin, a blockchain project building a decentralized ecosystem for gaming, has been releasing new features on a monthly basis. With the latest token swap functionality, the Enjin...