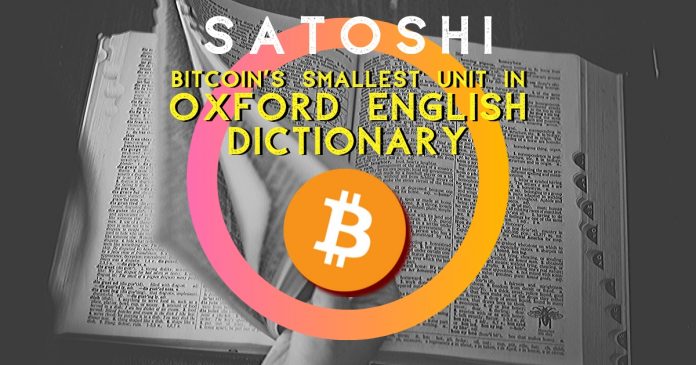 Bitcoin’s mysterious creator Satoshi Nakamoto’s name finds a place in the dictionary. The Oxford English Dictionary (OED) has decided to include it and even mentioned the creator’s date of birth.

Bitcoin’s popularity is on the rise. According to the OED, Satoshi was first used in 2012 in relation to the Ripple project. The OED’s definition of satoshi is: “the smallest monetary unit in the bitcoin’s digital payment system, equal to one hundred millionth of a bitcoin.” 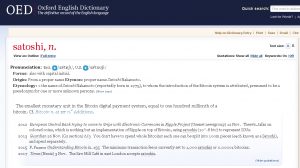 Source: OED.com
As per the OED, the origin of the word is the proper noun “Satoshi Nakamoto”, the pseudonym of Bitcoin’s creator. However, the OED states that there is no surety whether this name belongs to a group or an individual.
Furthermore, it says Satoshi was reportedly born in 1975. And it seems the Oxford Authorities believe the data shared by “Real Satoshi” in 2009 on a website. This was the first instance of bitcoin’s internet mention. And required Satoshi Nakamoto to provide his data of birth. In the near past, many claimed to be Satoshi Nakamoto, but Oxford does not mention these claims.

What makes this addition so special?

This is not the first time crypto verbiage has found a place in Oxford Dictionaries. Earlier additions included words like cryptocurrency, bitcoin, blockchain, and miner. But there is an important difference here.
The other words were first added to the Oxford Dictionary Online (ODO). From here the words are removed if the popularity or usage drops. On the contrary, “satoshi” found its way to the OED–and the words are never removed from there. They only undergo an alteration of the meaning.

The October 2019 update revealed the word cryptocurrency has moved from ODO to OED. It made its entry to the ODO in 2014. Now OED officially defines cryptocurrency in two ways: 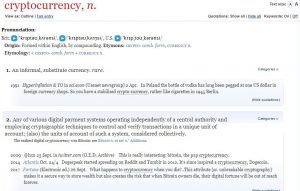 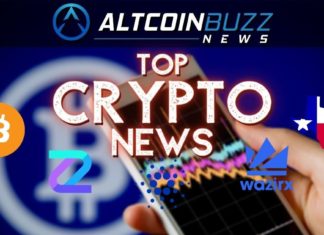 The 5 Most Secure Tokens Worldwide

The Reserve Bank of India is Developing a Blockchain Prototype Model