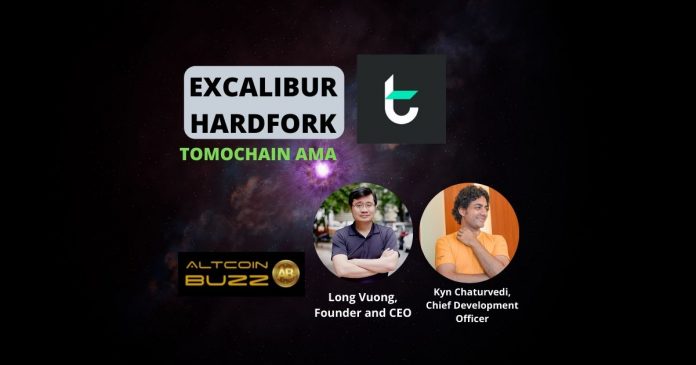 The much-anticipated TomoChain Excalibur hardfork went live on May 12. To inform users of the details of the hard fork and answer their questions, Altcoin Buzz hosted an AMA with TomoChain.

Earlier, we had invited our users and TomoChain followers to share questions they want to be answered during the AMA hosted in our YouTube Spotlight segment show. Founder and CEO of TomoChain, Long Vuong, and chief business development officer, Kyn Chaturvedi, were the guest speakers on the AMA, while Layah Heilpern from our team anchored the AMA.

Previously, we had announced a giveaway in collaboration with Coingecko leading up to this AMA.

The AMA in detail

Directed at Kyn, the first question on the list was about enterprise usage on TomoChain.

Kyn disclosed that there were currently several enterprise partners working on TomoChain, some of which have actually launched. He also mentioned they had currently three different offices. Its Japan office majorly focuses on enterprise usage and partnership. Many of the partners will work on traceability, healthcare, and payments. One of its partnering companies will use TomoChain for food traceability, preventing counterfeit goods and ensuring a trustless system. Kyn went on to promise the release of more details about upcoming partnerships soon.

Another interesting question that came up during the AMA was about TomoChain’s business strategy that would ensure it gets more users and investors.

To answer this, Kyn first affirmed that TomoChain was indeed an extension of the Bitcoin technology. He also reiterated one of its main aims was to fix centralization issues and facilitate innovation around the decentralized finance (DeFi) space. According to him, Tomochain was working towards a time when all financial transactions on the blockchain would be mainstream.

About the Excalibur hard fork, the TomoChain founder and CEO, Long Vuong, explained what made it so special. He went on to call it best suited for building financial applications.

Run by masternodes, the Excalibur launch will support P2P lending. The hard fork would moreover make it possible to cheaply build exchanges and ensuring they are secure and decentralized. Previously, we covered TomoChain’s announcement of its Excalibur hard fork.

Kyn also added that they believed in everyone being able to serve as a bank for themselves and expressed their interest in users with this same mindset.

The TomoChain AMA also focused on the marketing and outreach plans. On the question of  TomoChain listing on top exchanges, Kyn reminded getting listed on KuCoin since last year. For now, however, they were looking towards regional expansion, he pointed out.

He gave the example of the recent listing on the Indian exchange, CoinDCX, and a strategic partnership with Korean exchange Fleta. Kyn also shared TomoChain’s plans with a major focus on the rapidly growing China crypto and blockchain space. Moreover, he added they were in talks with several top exchanges in the United States.

The TomoChain AMA was the first-ever hosted by us in our YouTube Spotlight segment “where we speak to entrepreneurs, innovators, and thought leaders in the crypto and blockchain space”. It turned out to be quite a success and would go a long way in helping the community to find value in top altcoin projects and understand it better. 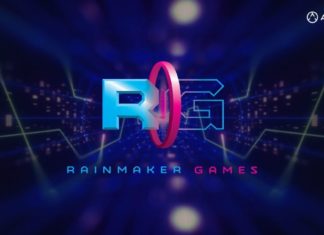 GameFi Platform Rainmaker Aims to Become a ‘Netflix of Games’