TomoChain announced the release of its multi-chain liquidity protocol which is an improvisation of swap protocols like UniSwap and SushiSwap. Unlike the rest of the AMM-based swap protocols, LuaSwap focuses on helping emerging tokens by supporting liquidity pools. The community is pretty excited about the fair launch of the protocol as it will require no seed investment, founder’s fees, or pre-mine.

Additionally, LuaSwap, the TomoChain swap protocol is a community-governed multichain protocol and it might prove to be a game-changer for emerging tokens. That’s because these tokens will not have to fight for liquidity within leading token pools. Furthermore, the Liquidity Providers will receive LUA tokens as incentives for maintaining the liquidity pool.

LuaSwap is an audited swap protocol.

According to Long Vuong, CEO TomoChain, leading audit and security firms QuantStamp and Certik have been invited to farm and audit LUA.

We invited @Quantstamp @PeckShield @Certik_io and other reputable researchers to farm and audit LUA contracts. Our farm is small, but $LUA is real and we pay in cash :))) Please reply or DM https://t.co/3JTMaCGviB @LuaSwap

LUA’s tokenomics is different from existing swap protocols. One who holds LUA will also hold a share in the LuaSwap governance protocol. Apart from that the rewards are not only limited to early adopters. In fact, it also incentivizes LUA holders for participating in governance for a longer period of time. Moreover, the governance rights of LUA holders are:

LUA farming starts on September 28. However, users can start depositing UniSwap LP token on LuaSwap.org. Those who stake their LP tokens prior to that stand a chance to receive the maximum amount of LUA.

Coingecko’s recent survey revealed that most of the yield farmers are conducting farm and dump. Basically, opportunistic yield farmers farm the tokens and then immediately leave the protocol. Thus, eventually both the protocol and tokens lose their value.

According to the official announcement, the initial liquidity pools will be:

With the LUA Treasury in place, the platform will build funds to improve the protocol. The major enhancements that are expected to be seen in the future are: 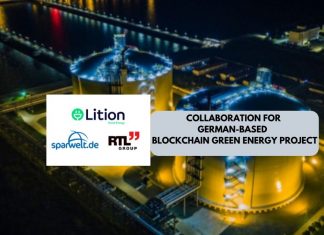 David Abel - May 8, 2020 0
Lition has announced its partnership with Sparwelt and RTL to carry out a blockchain-powered green energy project in Germany. Sparwelt GmbH is a subsidiary of...