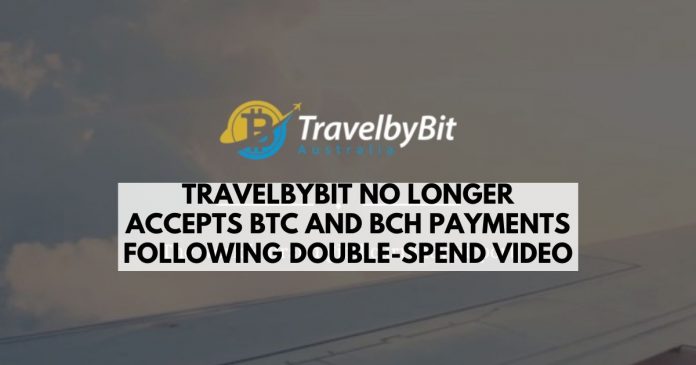 In a bid to discredit Bitcoin, Hayden Otto, CEO of Bitcoin Cash on December 18, 2019, broadcasted a video on his twitter handle. In it, he described how double-spending can easily take place using bitcoin. However, several bitcoin supporters allege that BCH is susceptible to the same type of attack. Even though the BCH network does not make use of the Replace-by-Fee (RBF) protocol.

Ironically, BCH’s attempt to debase Bitcoin turned out to be dubiously successful. Shortly after the video went live, TravelbyBit decided to get rid of both BTC and BCH.

In an exclusive interview with Micky.com, Travelbybit CEO Caleb Yeoh disclosed that his company will be “dropping both Bitcoin and Bitcoin Cash from the POS (Point of Sale).”

Also adding that ” both Bitcoin and Bitcoin Cash are not satisfactory enough for retail POS transactions. As they have many “trade-offs between user experience vs security.”

As a result of this decision, about 400 Australian traders will no longer be able to use BTC and BCH on the platform.

The Replace-by-Fee (RBF) protocol has attracted a lot of controversy since its inception. It is basically a protocol that allows users to replace a transaction with a completely different one. RBF launch resulted in a lot of disagreements. It negates one of Bitcoin’s founding principles which is irreversibility. Vinny Lingham, former CEO of Gyft disclosed how bad RBF was for his business in 2018.  He said: “We processed over 100,000 transactions with amounts from $5-2000/transaction with no double spends.” Also adding that: “Over $25m in sales and the first time we got a double-spend attack was after RBF was introduced.”

In January 2019 Ethereum Classic also experienced double-spending attacks resulting in a loss of about $500,000.

Otto appears unperturbed about the delisting. He also added that “BCH alone accounts for over 93% of Australia’s crypto retail expenditure.” Pointing out that all this economic activity occurs outside the TravelByBit network. Hence “BCH adoption in Australia is unaffected.”

Previously, we reported that Binance recently partnered with the payment processor.

Chris Perrotta - June 12, 2018 0
In a shocking announcement, Coinbase revealed the next asset to be listed on their platform, Ethereum Classic (ETC). "We plan to offer support for...

Up and Coming NFT Marketplaces to Know