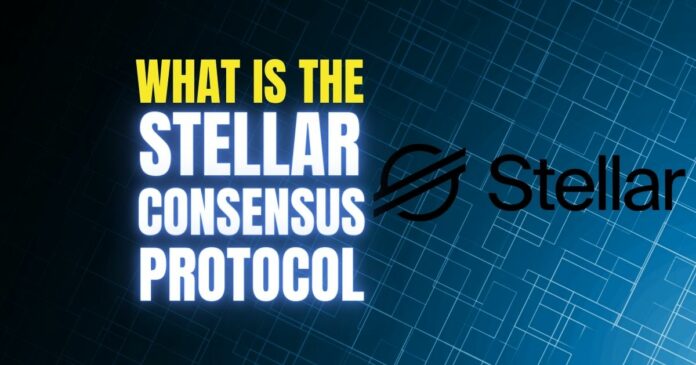 At the core of blockchain is the promise of a trustless system where the community is used to verify the validity of transactions. Yet how does it accomplish that? Consensus protocols are the names given to the various approaches used by different networks to verify transactions.

A blockchain network’s core consensus protocol provides a precise way of determining whether a transaction is genuine or false. It offers a way to verify the data that should be included in a blockchain’s record. This article will shed more light on the Stellar Consensus Protocol.

What is the Stellar Consensus Protocol?

The Stellar Consensus Protocol (SCP) is an open-source system that offers a unique way to reach consensus without relying on a closed system to record financial transactions accurately.

The consensus protocol Stellar does not require transaction approval from every miner in the network. In its place, Stellar uses the Federated Byzantine Agreement (FBA) algorithm, which allows for quicker transaction processing. Stellar is said to process up to 1,000 network operations per second.

#GreenCrypto, inclusive, low fee and fast transactions are a must and @strongholdpay #SHx token achieves that by using Stellar Consensus Protocol, a low-energy consensus mechanism achieved through Proof-of-Agreement.#Stronghold101

Side note: Be green in all aspects of life https://t.co/pJSLENlYLM

Also, the Stellar Consensus Protocol functions by letting nodes choose other nodes they believe to be reliable and then working with them to produce and validate a set of valid transactions to alter the ledger’s state. These nodes then pick other trustworthy nodes to collaborate with and follow suit to arrive at network consensus through a quorum.

This process is totally different from the Stellar Consensus Protocol. As mentioned earlier, SCP is a construction of the Federated Byzantine Agreement (FBA), which differs from the POS and POW mechanisms. FBA relies on the collaboration of trusted nodes.

Each participating Stellar node selects the node they want to trust. This system provides flexibility and decentralized control. Stellar does not offer monetary rewards for validators. Instead, validators understand that they are contributing to the resilience and security of the network.

Learn how the Stellar Consensus Protocol (SCP) functions and why it's unrivaled by other blockchain networks. https://t.co/XEW2D3co9G

The proof-of-work consensus mechanism is one of the oldest in the blockchain ecosystem and is used by the likes of Bitcoin. Ethereum only recently moved to a proof of stake. Proof of work is heavily secure. But, it is energy intensive since it relies on the computational energy of miners.

Under the Proof-of-Work mechanism, miners are block creators. So, miners aim to solve for the hash, which is a cryptographic number, to verify transactions where they receive rewards to do it. Miners, however, need to invest in heavy computing equipment to become block creators. And these often come with heavy energy bills.

The Stellar Consensus Protocol is not energy intensive like the POW. However, proof-of-work has become more popular.

The consensus protocol serves as the structure for verifying transactions in the Stellar Network. Participating nodes often have to agree on the rounds of transactions coded into the ledgers of the networks.  But this mechanism has faced criticism:

Other consensus mechanisms, including the POW and POS, have their fair share of scrutiny. POW, for instance, is energy-intensive, needing costly equipment to mine. While POS is more eco-friendly, there are concerns it could lead to censorship and decentralization.

Despite the criticism of the Stellar Consensus protocol, it offers huge advantages, such as:

Stellar claims its consensus protocol has applications beyond the financial world. It claims SCP can help organizations carry out transparent tasks.

That’s it for now on our SCP piece.