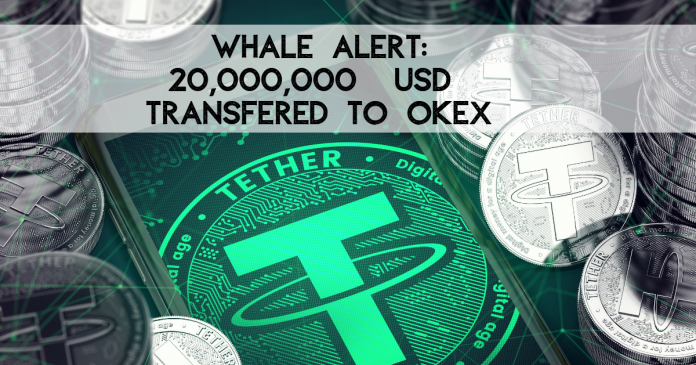 OKEX, the Malta-based cryptocurrency exchange continues to be under the “Whale Alert” radar. While the exchange is yet to recover from the August 26th Bitcoin fud, it has landed in hot soup again. And this time it is for USDT. 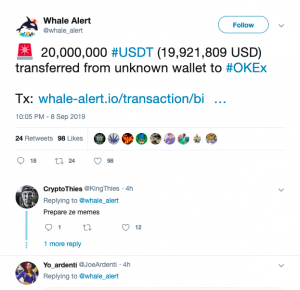 In its Mon, 09 Sep 2019 05:03:36 UTC tweet, Whale Alert reported a 1,956.94960118 BTC movement. And once again it turns out to be an unknown wallet transfer. Strangely enough, the movement reflected no sustainable effect on the USDT price till press time. Prior to the movement, USDT was trading at $1. Suddenly in the next 30 mins, the trading price jumped to $1.02 which could not sustain beyond 15 mins. At the time of the press, USDT is again trading at $1 USD.

Does this reinstate the “volatility resistance” of stable coins?

The majority of the USDT investors consider it to be a pumping attempt. And they might be right as USDT price over last week exhibited near “zero” rise. But the community is curious. Primarily because the whale movement happened within 24 hours of altcoins recording 5-6% price recovery.

Was Wallet address holder “1MjgfwnT9DDZUWcV2A8kAvXvVnmJwNBDjZ” trying to manipulate the USDT price? We do not have the answer yet but OKEX has made it to the news again.

Prior to this whale, OKEX knee-jerked its community in late August. As it turned out $95 million worth BTC was moved to an unknown address from the exchange. Following the “OKEX being hacked” uproar, CEO Jay Hao tweeted on Sep 4th that the movement was scheduled maintenance.

Such a massive unannounced scheduled movement was not taken well by the community. That was past. Today’s 20 million USDT movement indicates OKEX security is intact and someone is now experimenting with USDT’s price stability.

Martin Young - December 13, 2021 0
We have seen new decentralized finance projects launching innovative solutions with fiat currencies and inflation. One to keep an eye on is Hector DAO...

Can You Earn Passive Income With Your Tesla?