Google feels like breaking, or perhaps slightly adjusting, its rules. The most popular search engine among Internet users lifted the ban on cryptocurrency-related advertising, reports CNBC.

But that is far from everything. Google also wants to allow regulated crypto exchanges to buy ads in the United States and Japan starting October.

To remind, Google introduced the ban back in March. Like Facebook, which banned crypto ads but subsequently eased the rules regarding them back in June, the search engine wanted to  “protect consumers and included initial coin offerings (ICOs), wallets, and trading advice.” The latter are still not allowed.

Commenting on that ban back  then Google’s Scott Spencer told CNBC “We don’t have a crystal ball to know where the future is going to go with cryptocurrencies, but we’ve seen enough consumer harm or potential for consumer harm that it’s an area that we want to approach with extreme caution.”

And it is little wonder why. ICOs and scams have almost become synonymous in the world of crypto. Recently, Altcoinbuzz reported that the CEO of the U.S. crypto firm GAW Miners, Homero Joshua Garza, has been imprisoned. The reason was simple: he created a Ponzi scheme. Likewise, the Federal Court in California granted the SEC’s request to halt an allegedly fraudulent ICO which concerned ‘Blockchain Evangelist’ Michael Stollaire, the creator of Titanium Bar Scam. That was back in May.

Besides, according to the latest data mentioned in the report “Don’t @ Me: Hunting Twitter Bots at Scale,” there are more than 15,000 bots operating on Twitter.They specifically like the concept of giveaways so it seems.

“Google’s updated policy applies to advertisers all over the world, though the ads can only run in the U.S. and Japan and interested parties will need to apply for certification to serve ads in each country individually,” writes CNBC.
The decision to lift the ban is a positive sign given that solely not that long ago Google updated its policy for Play Store factually banning mining apps.
On a different note, Google security lead, Mark Risher, recently warned about the dangers of exposing your ego online. Specifically, he cautioned crypto traders against boasting of their cryptocurrency portfolio on the internet. 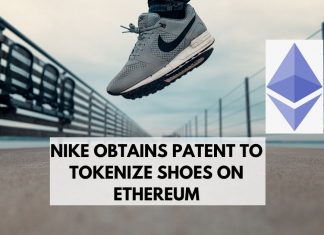 Nike Shoes and Ethereum? Why Not

Racheal - December 12, 2019 0
The behemoth sports manufacturer, Nike, has obtained a patent to tokenize shoes on the Ethereum blockchain. The US patent and trademark office released a report...